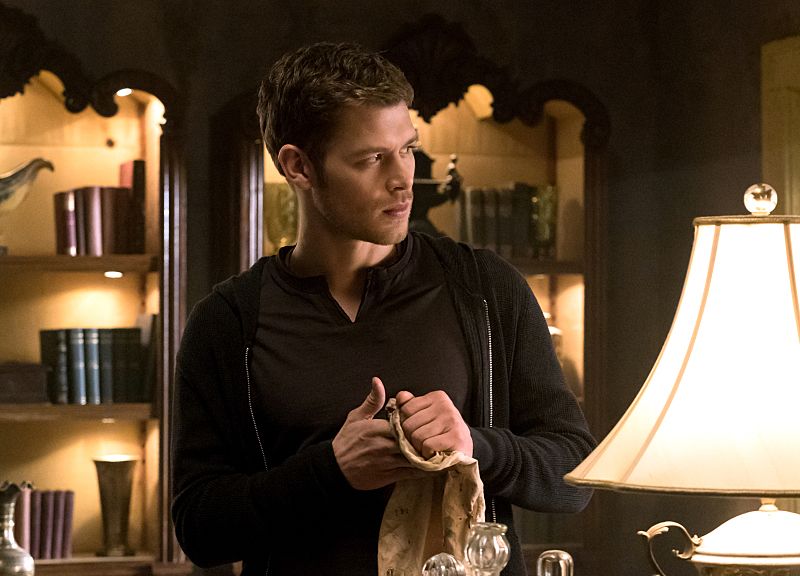 Death, mayhem and destruction are nothing new in THE ORIGINALS, nor are decapitations, ripped out hearts or back-stabbing betrayals.  But in this week’s episode ‘When the Levee Breaks,’ there will be more than a few broken hearts, as broken trusts and broken promises abound, and those will hurt more than any of the other atrocities to which fans of THE ORIGINALS have become accustomed.

Already distrustful of both Freya (Riley Voelkel) and fearful of Dahlia (Claudia Black), Klaus (Joseph Morgan) is frantic to keep his daughter Hope safe.  His relationship with the Crescent Moon wolves is tenuous at best and he relies upon Hayley (Phoebe Tonkin) and Jackson (Nathan Parsons) to rally and command the wolves to protect Hope.  Yet vampires, werewolves and even their witch friends combined are not going to be enough to keep Dahlia from claiming Hope as her own.  It is a promise made by Esther to her sister Dahlia that must be honored and Dahlia’s power is greater than anything ever encountered before.  Drawing upon centuries of first borns, Dahlia is a fearsome creature.  Just how will she be stopped?

Klaus’ brilliant plan seems to involve his father’s ashes, but really will it be enough?  In addition, Klaus’ sanity seems to be in question.  He is terrorizing everyone instead of cultivating their alliance and allegiance.  Is it enough to be feared? Shouldn’t Klaus for once use friends and family as his strength and not rely on their fear to keep them aligned with him?

Alas, Klaus always seems at his best when those around him quake in his presence and obey out of fear rather than admiration and love.  Fortunately, his brother Elijah (Daniel Gillies) understands Klaus’ dependency on rage and fear than the softer emotions, and Elijah has always been at Klaus’ side and had his back.  But what if Klaus were to push away Hayley, who Eljiah loves almost more than life itself?  Then where will Elijah’s allegiance lie?  It seems like an absurd question, but family versus true love — that can be a difficult decision to make.

So with Cami (Leah Pipes) trying her best to keep Klaus from losing his mind completely, or at least help keep his instinct to kill everyone in his path under control, shall everyone be successful in reigning in Klaus long enough to ensure Hope does not fall into Dahlia’s hands?  Unbeknownst to just about everyone, Klaus is actually the one thinking the most clearly.  He might be ferocious and unforgiving his his approach to keeping Dahlia at bay, but he has proven to be a brilliant strategist over the centuries.  It would behoove everyone to listen to him and trust his killer instincts.

Alas, ‘When the Levee Breaks’ proves how fatal and devastating it is when those around him do not listen and trust in Klaus.  Be warned:  hearts will break, trusts will be broken and no one will be safe.  No one.  And pity those who failed to heed Klaus’ warning.

As for Dahlia, like Klaus, she is a brilliant manipulator and no one to be trifled with.  All the spells in the world are not going to stop her for long.  The world should quake beneath her feet and it is shall.  Even Klaus has the sense to know that she is someone that every ounce of his being should be focused on defeating.  With an enemy that close and that destructive looking to take claim to his daughter, Klaus knows that she must be stopped and destroyed.  But who shall listen and who shall fall because they failed to listen, that is the heart-breaking reveal in this episode.

To help tease a bit of what to expect, here are some choice quotes that fans can look forward to in ‘When the Levee Breaks’:

QUOTE:  “New witch body not up to last night’s bender?”

QUOTE:  “I know full well the threat we face and I intend to deal with it.”

QUOTE:  “I alone mourn him because I alone loved him.”

QUOTE:  “If we can’t trust one another, we cannot work together.”

QUOTE:  “Your loyalty is refreshing.”

QUOTE:  “We’ve been through worse; we’ll get through this.”

QUOTE:  “Swear to me that you will not allow Klaus to be our undoing.”

QUOTE:  “This may come as a surprise to you, but I’m not a terribly good person.”

QUOTE:  “That was when I needed you most.”

QUOTE:   “They were almost as young and beautiful as you.”

QUOTE:  “It only takes one match to burn down acres of fields.”

QUOTE:  “It would be depressing if one of us didn’t get a happy ending.”

QUOTE:  “I leave you with the burden of the truth that no one will believe.”

To find out who is hiding a truth that no one will believe and who does or does not align with Klaus in his quest to vanquish Dahlia, be sure to tune in for an all new episode of THE ORIGINALS on Monday, April 20th at 8:00 p.m. on the CW.