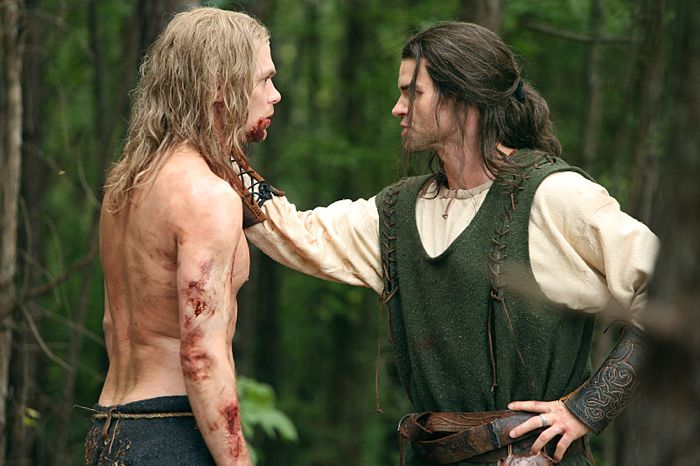 After tonight’s jam-packed episode “Red Door”, fans heads are surely spinning a bit.  So to help answer a few questions that might still be buzzing about, at a recent press screening, executive producer Michael Narducci talked about what’s next after this pivotal episode.

Hayley’s Choice
MICHAEL:  Hayley (Phoebe Tonking) is put in a position to choose: save Elijah (Daniel Gillies) or save Klaus (Joseph Morgan)? It’s pretty clear what Marcel (Charles Michael Davis) is going to do. Marcel is going to save Klaus because if Klaus dies, Marcel dies.  In that moment, Hayley’s wheels are turning and you see what decision she makes.

(When forced to choose between rescuing Elijah or rushing to the aid of Klaus, Hayley makes the impossible choice and rushes to help Klaus. Why?  Because if Klaus dies, perhaps that means their daughter Hope dies too.)

(Tatia is linked by direct linage to both Katherine and Elena, all three linked by blood and the doppelgänger curse.)

Esther’s Mind-Set
MICHAEL: Esther’s drive is: “I knew when I made my children into vampires that I was just trying to save them.  I had no idea that they would become these beasts that would live for a thousand years and feed on innocent lives and create a disease that is vampirism that would spread all over the world — and I died and now I’m back and I want to make up for that to save my children to save them from this Hell on Earth that I have created and I want to save them from this horrible existence that they are enduring.  And in order to do that I need to make their lives miserable. I will do whatever it takes and then they will beg for me to change them — and because I love them, I will.”

Elijah’s Kryptonite
MICHAEL:  [Esther] needs to make a case for why being a vampire is the worst, and she can save [Elijah] by putting him into another body and giving him one mortal lifespan to know peace and to have happiness and to have a family of his own and to life a semi-natural life.  Being a vampire is not natural.  He would go into the body of a witch and have a more natural life, according to Esther.  So to convince him of this, she needs to confront him with the very thing that is his kryptonite.  What we have always said is his weakness — going back to Episode 7, Bloodletting, at the fight club that Marcel is throwing — you can see the way he sees other vampires, as if they are scum.  He doesn’t like other vampires.  He has fallen in love with Katherine and he’s had certain other moments when he has respected other vampires.  But when he saw Elena in THE VAMPIRE DIARIES, he said that she reminded him of the goodness of being human.  And then in Episode 16 last year, Klaus and Elijah are at each other’s throats, Klaus says:  “You wear a mask of civility when we both know that you are just as bad as I am, if not worse.”  The notion is that Elijah hates being a vampire.  So his defense mechanism is to dress it up and to have a code.  Not just a suit and a handkerchief, but a suit of honor.  That’s why he says, “I give you my word” and he keeps it.  There are certain rules and he believes, “If I cling to those rules and if I believe in them fundamentally, then I can endure this existence as a creature that feeds on the blood of other creatures.”  That’s kind of his blindspot — his weakness — the thing about him that he has buried away.  So Esther is attacking that and making him confront that on the notion that will destroy him.  Then like a kid that joins the Marines, you get broken down and then get built back up.  She wants to break him down completely.  That notion is a big part of Elijah’s story going forward.  By confronting this, via his mother, how will he react and what will he do?  And what does she intend to do to Klaus? What does she intend to do to Rebekah (Claire Holt)?  If that was Elijah’s krytonite, what’s theirs?

Kol’s Alligiance
MICHAEL:  I wouldn’t say [Kol] is about to jump into bed with his siblings.  He’s got his own agenda. He did not know what his mother exactly wanted — although he did protect that linkage spell.  There’s a big hint there:  why does Esther care that Klaus and Elijah are linked to the other vampires that they have sired?  Why should she care?  I thought she was just focused on her children.  So there’s a little bit of an interesting clue there. But Kol, he knows his a lesser witch than Finn and he is a lesser witch than Esther.  It was by design. Esther knows she cannot completely trust Kol.  She thinks she’s given him an opportunity for a new life and expects some loyalty, but she wouldn’t put him into a super powerful witch because Kol is little bit of a trickster.  So when Kol refuses to answer that phone call, then two seconds later his nose starts bleeding, Finn’s like “don’t mess with me, I own you.”  So he’s on a little bit of a leash. Everything he does is part of his agenda to break free of that leash. So Davina? Does he care about her?  Or is he using her as a potential ally to get himself out of a hot-spot?  I think that is one of the great questions about his character.

Mikael Gone But Not Forgotten
MICHAEL:  [Mikael] just got his ass kicked.  Two episodes in a row, he goes head-to-head with Klaus and in this episode he actually defeats him.  It’s the thing he always wanted for a thousand years, and it doesn’t work.  I love the frustration that Sebastian played on his face in that moment. . . He is face-to-face not only with his son who has not died, but Cami who defiantly now has the white oak stake — the tool he needs to kill Klaus — then Marcel comes in and Hayley hits him with the cement block.  That is absolutely what we wanted:  this notion that Mikael has made his existence about his desire for revenge and Klaus has made an existence out of his desire to keep his family, even if he is keeping them in coffins with daggers in their hearts, family is very important to him.  And because of that, his son Marcel, his baby mama Hayley, the adopted daughter of his adopted son Davina (Danielle Campbell), and Cami (Leah Pipes) who is kind of the family therapist — everybody stood with him and when confronted with that Mikael had no choice but to flee. I’m sure he is going to regroup and he’s going to be back.  But importantly, he doesn’t have the white oak stake anymore.  So it’s not like he can come charging in at any point.  He’s got to come up with a plan and I think he’ll have an interesting one.

Heaven help the Mikaelsons! With a mother and father like that, is it any wonder that Klaus, Elijah, Rebekah and Kol have turned out as they have?  It also explains why family, above all, is so important to them.  So as Season 2 plays out, be sure to tune in for all new episodes of THE ORIGINALS on Monday nights at 8:00 p.m. on the CW.  No one is going to want to miss when Mikael and Esther come face-to-face!