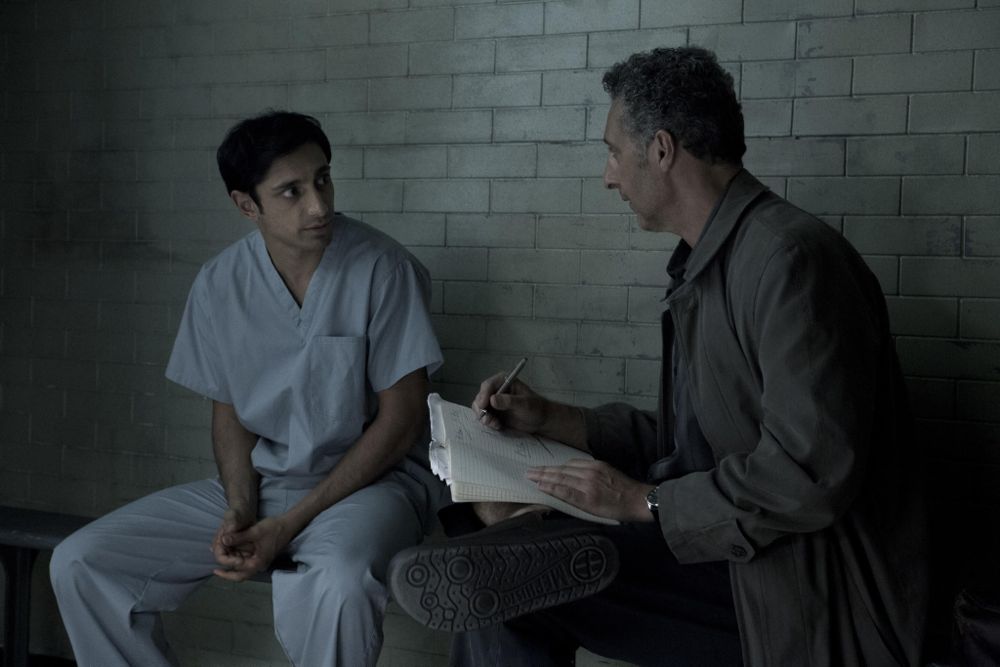 The premise of HBO’s excellent new series THE NIGHT OF is simple enough. A man parties a little too hard, does a few too many drugs, and wakes up to find a girl he just met and slept with stabbed to death. (That’s in the show description, so I don’t feel it counts as a spoiler.) Where it goes from there, though, remains to be seen, and based on the gripping pilot, I can’t wait to find out.

As THE NIGHT OF begins, we are introduced to Naz (Riz Ahmed, Four Lions), a college student in New York of Pakistani origin on his mother’s side. Naz seems like a pretty good boy, obediently still living with his family and working hard to get through school and build a life. But one night, he really wants to go to a party. Along the way, he meets a pretty girl, Andrea (Sofia Black-D’Elia, The Messengers), who tempts him even further from the path. And by the end of the night, due mainly to a series of bad decisions, Naz ends up probably having his life ruined.

It’s easy to feel sympathy for the young man. Who hasn’t had their head turned by an attractive member of the opposite sex? Who wouldn’t push their boundaries at the promise of sex? Who doesn’t like attention focused on you, even if it’s from someone who may just be a bit (or a lot) crazy?

Yet, it’s also super frustrating as Naz keeps making poor decisions. Sure, some can be blamed on the elicit substances he ingests, but from the start, he enters into these activities willingly. Naz isn’t kidnapped or forced into anything; he’s young, dumb, and full of… well, you know. It’s as understandable as it is infuriating.

Although we do not bear witness to Andrea’s death itself (again, thanks to the show description, we know it’s coming from the start), it seems extremely unlikely that Naz murdered her. The audience spends enough time in his perspective to get a sense of who he is, and a killer, he is not. At the same time, there is no likelier explanation presented to us, and certainly not to the (surprisingly well developed) police that show up. The verdict is rendered in their heads just as surely and immediately as Naz’s innocence asserts itself in ours.

This makes THE NIGHT OF a compelling drama. We don’t know what’s going to happen, but it’s going to be bad. The pilot itself is a thriller, constantly keeping viewers guessing as to what might occur next. Will Naz be caught? Will any evidence support his claims? Where is this going?

Buoyed by an excellent supporting cast, most notably John Turturro (O Brother, Where Are Thou?), who steps in for the late, originally-cast James Gandolfini (The Sopranos) as sympathetic defender Jack Stone, each scene is magnetic. I was hooked about ten percent of the way through the pilot, and never looked back.

I do wonder how this show would be different if Ganoldfini has starred (or Robert DeNiro, for that matter, who signed on before the role was recast again for Turturro). Stone would be a very different person in the hands of another actor. Yet, Turturro feels so perfect, as if the show was written just for him, that any speculation is merely a thought exercise and surely doesn’t affect the finished product.

HBO graciously released the pilot of THE NIGHT OF on their streaming service early, so anyone who is inclined can go ahead and view it. My only complaint with this strategy is that we’ll be waiting weeks for episode two, and I would gladly watch it immediately after the premiere, if that were an option.

THE NIGHT OF officially premieres July 10th at 9/8c on HBO.