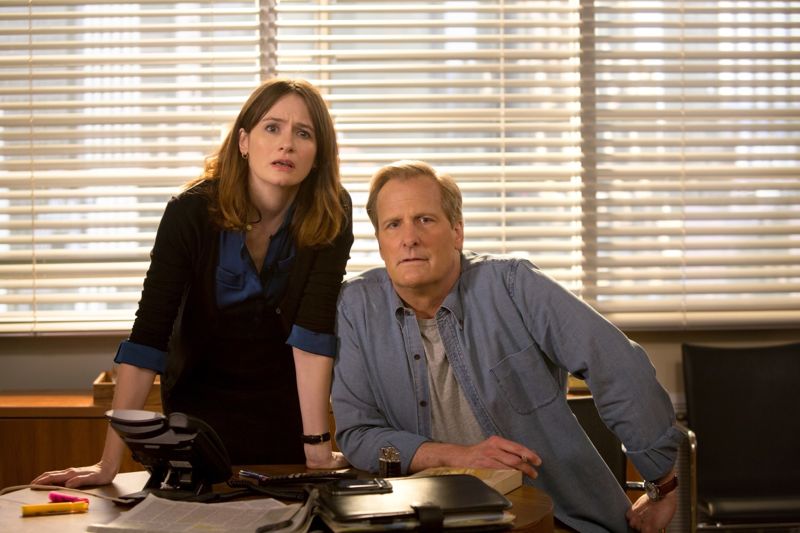 HBO’s stellar series THE NEWSROOM begins a six-episode third and final season this week with “Boston.” I know THE NEWSROOM polarizes people, and many viewers either strongly love or hate it. You can probably tell from the first sentence of this review that I am in the former category, seeing it as a brilliant piece of television that has been killed too early and will be sorely missed. But if you fall into the latter, stick with me briefly, if you would, and I’ll tell you why “Boston” and this show are fantastic.

As some may have already guessed from the episode title, the premiere takes place in the days immediately following the bombing at the Boston Marathon. Explosions go off, killing and injuring many innocents, and the country goes into panic mode. Our team struggles to balance expediency with rebuilding a sterling reputation, refusing to jump the gun in reporting rumors and tweets.

If you watched season two and stay up on current events, you can probably put the pieces together about where “Boston” is going. CNN gets out in front of a story, reporting misinformation, and it causes waves. Remembering the Genoa incident last year, in with ACN made a similar blunder, the staff takes pride in not falling into the trap again. However, with everyone else rushing to cover the latest Twitter and Reddit items, ACN begins losing their ratings share.

This presents a possible end-game for the series. The whole premise of News Night With Will McAvoy is to return to TV journalism’s roots, only reporting well-sourced, fact-based, non-biased information. This goes against the current trend in cable news, and without the immediate feedback that other networks practice, involving the public in the story, News Night risks being a dinosaur. That could kill it.

The depressing thing is, News Night is doing the right thing and everyone else is doing the wrong thing. We need a show like News Night, which currently only exists in this fictional world that Aaron Sorkin has created. It’s commentary on our current system, and those watching it should take note and demand better news. We deserve as much.

There’s another threat looming, too, but I feel like I can’t go into it here without spoiling one of the episode’s beautiful twists, several of which come together at the end of this initial hour to set the stage for the season and provide a driving force.

One thing not hampering the show any more is Reese Lansing (Chris Messina). He remains committed to his people with the newfound respect he develops for them last season. “Boston” very much represents a coming together of the cast with an us-against-the-world attitude. It may end in their version of The Alamo, but it’s one that is inspiring, nonetheless.

Besides Boston, THE NEWSROOM begins an Edward Snowden-esque plot when Neal (Dev Patel) receives thousands of leaked government documents, many of them classified. Another important debate of our time is how much the public has a right to know and if whistle-blowers should be protected. Since the Snowden saga hasn’t finished up in real life yet, Sorkin will have to bring us his version of how this story should end. I look forward to his take on such a complicated issue.

There are tons of moments and touches that make “Boston” a fine example of THE NEWSROOM’s proud run. MacKenzie (Emily Mortimer) and Will (Jeff Daniels) are planning their wedding and not understanding twitter, Sloan (Olivia Munn) uses her considerable genius to solve a puzzle no one even knows needs solving yet, and one of the primary players, who has only worked from the sidelines, finds themselves unexpectedly in front of a camera, with surprising results. And, of course, Will makes an impassioned, blood-pumping speech. These and more get me super excited about the coming season.

I’ve pounded out this review in ten minutes flat mainly because I am so excited that I cannot wait to get back to the other two episodes HBO was kind enough to send with this one. I hope the above illustrates how THE NEWSROOM is maintaining its gripping style, and gets you as anxious for this final run as it has me. There really is no better show on television.

THE NEWSROOM airs Sundays at 9 p.m. ET on HBO.