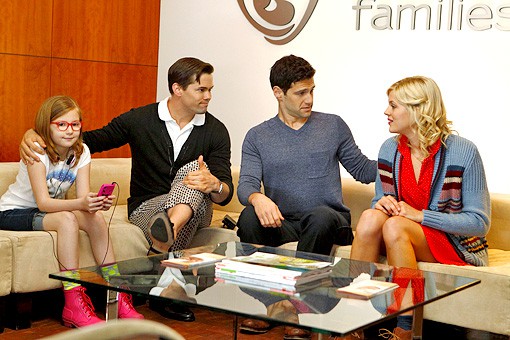 Coming to NBC next week is a different kind of family sitcom. THE NEW NORMAL is from the minds of Ryan Murphy (Glee, American Horror Story) and Allison Adler (Chuck, No Ordinary Family), and takes what Modern Family does a step further, with an edgier, less traditional clan.

In 2012, we all know that not all families look the same, but our television shows still do not reflect the large diversity that is out there. THE NEW NORMAL may be quite specific, making their situation less relatable, but it’s the oddness and quirkiness that should prove entertaining. Also, seeing a group of people in such an untraditional situation may help many find this familiar, even if their circumstances don’t mirror exactly the mixture shown on screen.

The premise is this: A young mother named Goldie (Georgia King, Little Dorrit), who had daughter Shania (Bebe Wood) as a teenager, is tired of putting her dreams on hold and relying on her bigot grandmother, Jane (Ellen Barkin, Fear and Loathing in Las Vegas, Drop Dead Gorgeous). Jane raised Goldie after Goldie’s own mother, who also gave birth young, split. After Goldie catches her boyfriend cheating on her, she gets the courage needed to make a change. This leads her, with Shania in tow, to the strange land of California.

At the same time, a gay couple named Bryan (Andrew Rannells, Girls, The Book of Mormon) and David (Justin Bartha, The Hangover), are ready to start a family of their own. Armed with eggs provided by Abby (Gwyneth Paltrow, Glee, Iron Man), their first attempt is a misstep. But then they meet Goldie, and decide she is perfect. After she agrees to serve as their surrogate, they offer to help her with her goals, much to the dismay of Jane, who has by now tracked them down.

The writers of this show clearly know what they’re talking about. Adler, herself, has gone through the surrogate process, and both creators are gay. The situations and characters they’ve created here feel only slightly exaggerated for television, and are definitely well-defined enough to tug the heartstrings. Bolstered by a terrific cast, the first episode, at least, is a sweet story with a lot of potential.

THE NEW NORMAL does not play to stereotypes too much. While sometimes the characters act exactly as one might expect they would, this isn’t always the case, and there are layers and motivations behind the various decisions they make. For instance, Jane isn’t just a bigot because she’s old. Her husband cheated on her with another man. It’s no wonder, then, that she is uncomfortable around gay people, her personal experiences clouding her overall opinion.

As to why she also is racist, well, that isn’t clear yet. We do know that the guys have a gal named Bryan has an assistant named Rocky (NeNe Leakes), and Jane doesn’t like her, either. But that’s something to explore another day.

Those familiar with Murphy’s other recent work may be expecting a song-less Glee, but hopefully this will not be the case. Glee proved that even if a good pilot is delivered, the story can still be wildly uneven, airing terrible weeks right after great ones. It will be interesting to see if, with a smaller cast, and without the structure that songs necessarily build into the story, Murphy can maintain a high quality. He did it with American Horror Story last year, albeit in a different genre entirely.

All in all, THE NEW NORMAL looks to be a fun new series that feels fresh and different from the standard fare. This opinion could change as the season unfolds, but it has made a good first impression, and on television, as in life, that is extremely important, and not always easy to do.