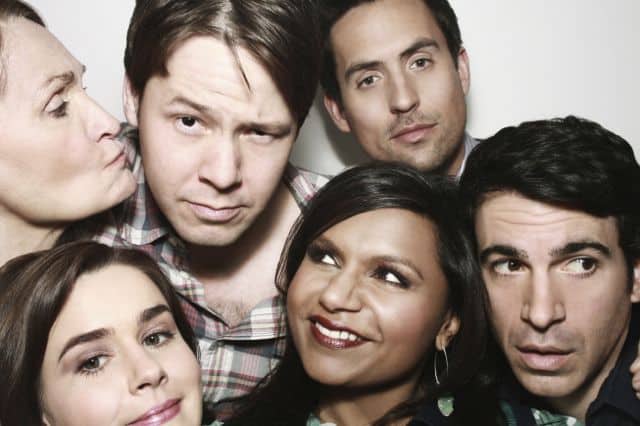 THE MINDY PROJECT, one of only two new broadcast sitcoms last year to garner a second season, returns with “All My Problems Solved Forever…,” now available on Hulu. In the episode, Mindy (Mindy Kaling) is flown home from Haiti to have emergency gallbladder surgery. Once back in NYC, though, she questions whether she should marry Pastor Casey (Anders Holm) and return to the island.

Mindy is a girl who just doesn’t know what she wants yet. She has been taught to think life is like a romantic comedy, and thus tries to follow the plot she thinks is laid out for her. She did so when she started dating the holy man, and when she followed him to a poor, third-world country, believing it would lead to her happy ending. After all, Casey is the key to “All My Problems Solved Forever…” for Mindy, right?

Then, Mindy continues along the path with him when she accepts his marriage proposal early in the episode and agrees to give up her dreams of a big wedding in favor of an intimate ceremony in her apartment, even though it doesn’t feel right to her, no more right than waking up for jungle sunrises. She just gets carried away. Mindy puts her whole heart into everything she does, and even when things start to turn wrong, she carries on.

There is something to be said for this quality of follow. It takes a lot of honor and determination. However, Mindy also needs to find herself and what she really wants. Sacrificing her own dreams isn’t right, and won’t get her the guy she should be with. Emotionally, Mindy is still a teenager, and she needs to work on herself before she is ready to figure out life with someone else.

Once one realizes that, THE MINDY PROJECT’s title and premise makes sense. And it’s a funny show, well worth one’s time. Without spoiling what happens at the end of “All My Problems Solved Forever…,” I will say that fans of both the show and the character should be at least partially satisfied.

The other major relationship in the show right now is that which is between Danny (Chris Messina) and his ex-wife, Christina (Chloe Sevigny). In the season premiere, Christina wants a lot more sex than Danny is willing to give her (though that is merely a symptom of their larger problems) so they begin seeing sex therapist Doctor Paul Leotard (recent Comedy Central Roast subject James Franco).

I really like Franco in this role, which works well in the established chemistry. Not only is Leotard replacing Mindy in the office, even taking her nickname of “Dr. L.,” but he also integrates himself into the dynamics between various characters. He isn’t sticking around long-term, but while he lasts, Leotard will be a great source of conflict and humor for the series.

Danny is a lot like Mindy in his tenacity and drive to do the right thing. However, he is a bit wiser and should know better. He being with Christina is just as wrong as Mindy and Casey, not finding what he needs from a relationship in Christina. Some may call it stubbornness, but Danny tries to make it work anyway.

Now, I’m not saying that Mindy and Danny should be together anytime soon. There are plenty of shippers for the pair who are fans of THE MINDY PROJECT, and this segment will get a scene to tickle their fancy in this episode. However, as I’ve said, Mindy must grow before she’s ready for a long-term, stable relationship that works, and Danny is the end-up-with type of man, not the experiment-on-the-way guy. So, for now, they should remain apart.

I do think there will be more opportunity for Mindy and Danny to bond this year, though, with Mindy’s gal pals reduced to recurring status, and completely absent from the season premiere. She has her co-workers, Jeremy Reed (Ed Weeks), Morgan (Ike Barinholtz), Besty (Zoe Jarman), Beverly (Beth Grant), and, very minimally, Tamra (Xosha Roquemore), to talk to, but none of them really fill that friend gap for Mindy. Danny may be masculine in some ways, but in others he’s a total fem. Plus, a strong friendship for them could set the stage for something more later.

Now, there is a little bit more to THE MINDY PROJECT besides relationship woes. But those are mainly just the funny gags and lines about relationship woes. After undergoing many changes in season one, the show should know what it is now and serve their audience better. “All My Problems Solved Forever…” is a good step in the right direction.