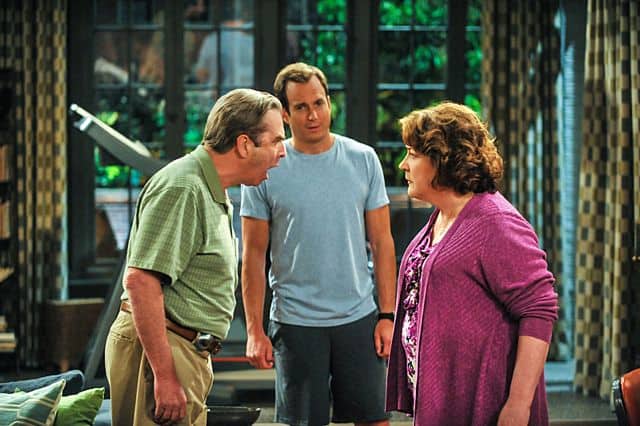 Will Arnett (Arrested Development) didn’t have to worry about getting worry about getting work after the fiasco of Up All Night’s second season; he immediately bounced back with THE MILLERS on CBS. Buoyed by an extremely talented ensemble cast, the show is yet another family sitcom, but because of the players on it, has a chance to do well.

Arnett plays Nathan, a local news reporter who has been hiding his split with his wife from his mom, Carol (Margo Martindale, Justified, The Americans), and dad, Tom (Beau Bridges, The Goodwin Games, Franklin & Bash). Carol and Tom come to visit after Tom floods their basement, and upset with their daughter, Debbie (Jayma Mays, Glee), for painting a room in the house they to rent her, they head to Nathan’s place. Obviously, once in the house, it’s hard for Nathan to keep up his lie of a marriage, so he comes clean, prompting Tom to ask for a divorce from Carol.

The scene in which Tom and Carol fight, in front of Nathan, is probably the single funniest scene I’ve watched this fall yet. They tell of a bad situation, and keep upping the ante with each barb back and forth, with poor Nathan forced to hear about something he would rather stay ignorant concerning. These three beloved actors sell the moment with earnestness, and I had to stop and rewind to immediately see it again.

Just because Tom and Carol don’t get along doesn’t mean they don’t love each other. Tom needs a break from Carol’s overbearing nature, but they definitely have a lot of history. Somehow, they convey in this scene that there is still some of bond here, and while it isn’t confirmed in the “Pilot,” I suspect their break up will not be permanent.

If only the entire half hour were that good. Don’t get me wrong, there are some other wonderful bits. The highlights include Debbie and her husband, Adam (Nelson Franklin, Veep, New Girl), watching Tom try to figure out their television remotes, as well as Debbie and Nathan’s interactions early in the “Pilot.” The family dynamics are terrific, and the writers should stick to those.

The problem is any scene that is not a private family moment. Nathan’s reporting on a filled-in sinkhole and public embarrassment of a child is dumb. Carol’s introduction to Nathan’s friend, Ray (J.B. Smoove, Curb Your Enthusiasm), is one big, long, unfunny fart joke. And Carol’s embarrassment at Nathan’s party, as sweet and amusing as the creepy moment between mother and son touches on and could be if done alone, is ridiculous.

Martindale deserve better. She doesn’t act like she’s better than the material, fully in the moment, which is a testament to what a professional she is. However, I don’t want to see her the butt of fart jokes, excuse the pun. Her role as a strong, smothering mother and wife is much more suited to her because at least it allows her to retain her dignity and play some layers.

Keeping things in the family might be difficult because Debbie and Adam are only recurring players. I assume this is because Mays will still be on FOX’s Glee, though I do not have confirmation of that. Until THE MILLERS locks in those other family members, keeping the focus only on Nathan, Tom, and Carol is going to force them to bring in outside players, as that just isn’t working.

This is not a slam against Smoove. He is funny in his own right, though it doesn’t really come through in the “Pilot.” Perhaps he can be worked into the family dynamic in time. But the work and party scenes fall flat.

Yet, as I said, the family stuff is solid. The Millers feel fully formed, familiar enough for most viewers, but with their own quirkiness and foibles. I could absolutely sign up to watch them week after week, and I think the tensions and relationships between the various relations can avoid getting stale or seeming too much like a retread of other shows, despite the crowded family-comedy genre. If THE MILLERS chooses to make that the center of the show, ignoring the other stuff.