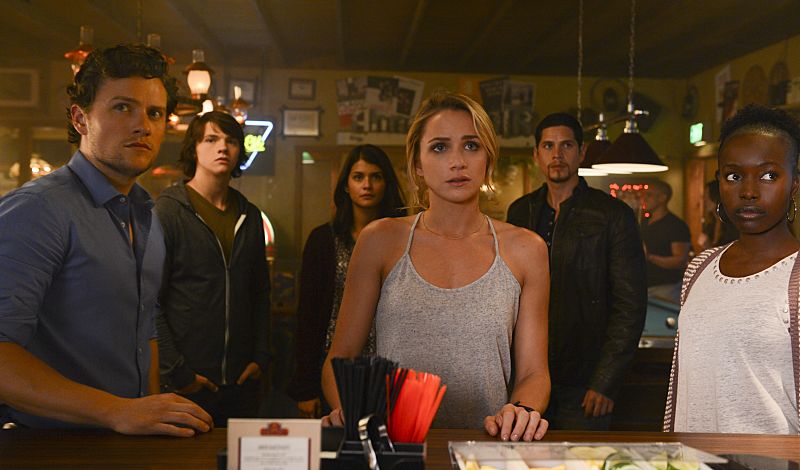 It’s never a good sign when The CW holds a show until mid-April before airing it, even bumping it back one more week as the premiere date approaches. Having just viewed the first episode of THE MESSENGERS, titled “Awakening,” I can see why this drama is being held until cast-off time, rather than getting a chance during the regular television broadcast season. It’s not the worst show the network has ever made, but it’s near the top of that list.

THE MESSENGERS begins with five strangers. Vera (Shantel VanSanten, One Tree Hill) is a scientist who sees something streak across the sky. Erin (Sofia Black-D’Elia, Gossip Girl) is a divorced mother with a little girl. Joshua (Jon Fletcher, Between the Black) is a preacher’s son at a mega church, sharing the gift of persuasion with his father. Raul (JD Pardo, Revolution) is involved with some bad dudes, though it’s unclear exactly what their deal is. Peter (Joel Courtney, Super 8) is an uncool high school student being picked on by a bully.

Then, one day, all of their lives change and intersect.

There is also a character called The Man (Diogo Morgado, The Bible). His intentions are hidden, and while his presence makes one uneasy, especially the way he is introduced, there really isn’t much to him yet, nor is the actor so menacing that viewers are likely to fear him.

The premise of THE MESSENGERS is far from original, but that doesn’t mean no television shows should do the strangers-drawn-together concept. It just means that there is a lot to compare it to, so if one is going to use the same format, one needs to make sure the product is high quality and can hold up to comparison. Usually, this is accomplished by casting very good, but often not super well-known, performers and crafting an intriguing, complex mystery. THE MESSENGERS lacks both of those elements (as well as subtext), the cast being OK, but nothing special, and the story confusing in such a way that it’s hard to care about.

A lot of THE MESSENGERS hinges on the mystery. “Awakening” shows us how the five get their powers, sort of, but doesn’t explain what those powers are and why they’ve been granted them. Press materials for the show reveal (SPOILER) that they are angels tasked with saving the world. I do not get that from “Awakening,” and even knowing what their mission is, it doesn’t matter. This pilot does almost nothing to make you care about these characters and their secrets are not laid out in a tantalizing way.

I do feel slightly sorry for a couple of them. Circumstance has dealt them a bad hand, or blindness to what’s going on around them has allowed them to become victims. But their situations seem too ridiculous to be believable, and should be put behind them quickly. An ex-husband threatens to lie in a police report and say you were drinking prior to the car wreck? You’re in a hospital, for goodness sake! Have medical professionals test you and provide evidence for your case. Your family is so sleazy it makes your skin crawl? Leave them far behind and have nothing to do with them ever again. Two problems with very easy solutions.

Could THE MESENGERS improve enough to be good? Anything is possible, but I doubt it. The concept is just far too poorly executed at the start to recover. The show needs new actors, new writers, and basically a reset of the premise to even begin to show promise, and once the pilot has been released, it’s too late for that. I don’t hold out any hope for this one.

THE MESSENGERS premieres April 17th on The CW.