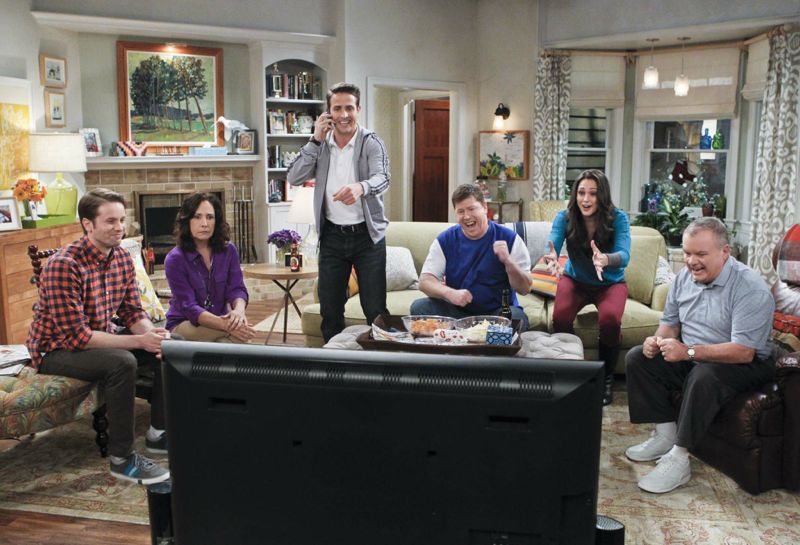 THE MCCARTHYS centers around Ronny McCarthy (Tyler Ritter, John’s other son), a gay man living in Boston. Dwelling very, very nearby are his parents, Marjorie (Laurie Metcalf, Roseanne, The Big Bang Theory) and Arthur (Jack McGee, Rescue Me, The Fighter), as well as his brothers, Sean (newcomer Jimmy Dunn) and Gerard (Joey McIntryre, from the band New Kids on the Block), and his sister, Jackie (Kelen Coleman, The Newsroom). Most of the together-all-the-time, overbearing clan is obsessed with sports, but Ronny and his mother still enjoy The Good Wife together, the family finding a happy balance.

That is, until Ronny decides to upset the balance by accepting a job in New Hampshire. Much of the pilot involves his family trying to make him feel valued so he will stay. I believe viewers will be able to guess the outcome of this, but THE MCCARTHYS does a decent job with the emotional arc that gets Ronny realistically to his decision.

The dynamic of family is both complicated and familiar. Every group has its own chemistry, with each member relating to every other person in a variety of ways. But the overall picture of love and acceptance, even when there is a lack of understanding, is the most traditional, recognized version of this. It’s not always realistic, but it’s what we all wish for and have become very comfortable seeing on our television screens.

THE MCCARTHYS is not a bad example of this. McIntryre and Dunn seem a little weak for now, but are good for a punchline now and again, and may improve in time when they get used to the format. Ritter channels his father, which earns him nostalgia that can only help most of the audience’s impression of him. Coleman has popped up on quite a few shows recently for good reason, as she’s terrific, and McGee is a reliable man. Metcalf, easily the best of the group and certainly the most recognizable, gives the kind of performance we expect from her, making for a decently strong ensemble.

But the writing just feels dated. In a time where Modern Family, About a Boy, and even, to a lesser extent, The Millers, have illustrated that the traditional family unit is no longer the only answer, seeing six individuals biologically linked together might almost be a novelty, if it hadn’t been down six thousand times in the decade prior. Plus, last year already saw the revival with The Goldbergs and others. The gay son is their nod to the present era, but it’s just that, a nod, not a primary focus, which is nice to see, but makes the show more mundane. THE MCCARTHYS doesn’t have anything new to say. Television has moved on from this stock image because it’s been worn out, so resurrecting it now is without benefit to the viewing community.

THE MCCARTHYS is funny; I’ll give it that. I didn’t get bored watching it, and some of the over-the-top stuff that the characters do actually seems genuine to these eccentric personalities. Perhaps there really isn’t a family like them out there, but if there was, this is how they’d be. The characters are consistent and the jokes, while often unoriginal, have good delivery. There are a handful of relatively compelling hooks involving Arthur’s basketball team and Jackie’s secret that ask watchers to tune back in. Which means that THE MCCARTHYS has a chance at finding an audience and sticking around.

I just mourn the loss of opportunity. Why not try something different that we haven’t seen before? Or at least put some kind of new twist on it. It’s good, not great, and when the TV landscape is as crowded as it is currently, full of high-quality, ground-breaking stuff, good is just not good enough.