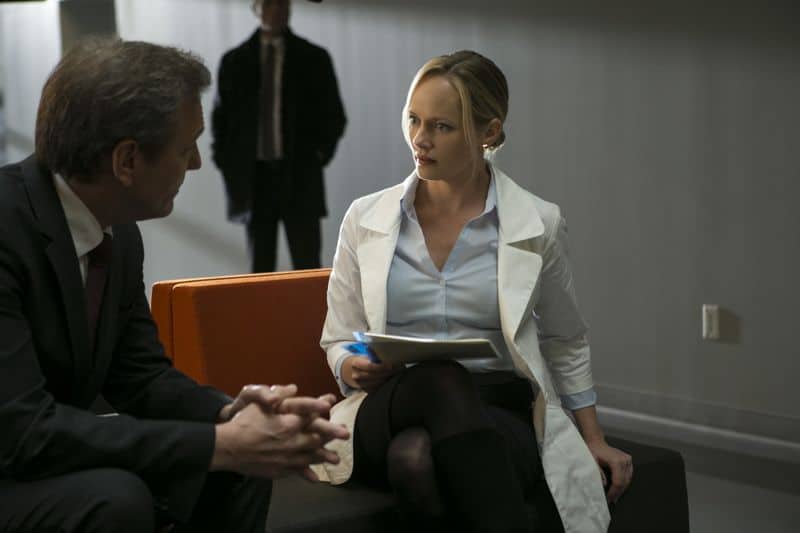 Lifetime ventures into the science fiction realm with their new drama THE LOTTERY, which premiered last night. Set roughly ten years in the future, mankind has inexplicably stopped having children. Scientists are clueless about both the cause and the solution of the problem. Then, Dr. Alison Lennon (Marley Shelton, Eleventh Hour) somehow fertilizes one hundred eggs which seem viable. Will she be able to save mankind, or will the intrusive government ruin her project?

THE LOTTERY boasts a really cool concept I’d expect to see on SyFy or FOX, rather than on Lifetime. I do wish the premise had gone further with the science part of the genre and given us some kind of excuse for the big event, but at least the ramifications for the human race and its struggle to overcome such a huge obstacle can be chronicled. This really would spell our end, and there is plenty to examine in this set up.

Unfortunately, right from the start, THE LOTTERY feels like typical Lifetime fare. It isn’t as over-the-top female-centric as some of the network’s other shows, such as The Ex List and Devious Maids, but it is very heavily headlined by women, and said gals are not nearly as likeable as those in, say, Witches of East End. Alison obviously is female, and while the President remains a white man, the series favors his chief of staff, Vanessa Keller (Athena Karkanis, Low Winter Sun) in assigning focus. And when it comes time to discuss parents’ rights over the ingredients in the fertilized product Alison creates, only the mother is considered.

There’s also very much a woman-as-a-victim viewpoint. Alison is singled out for firing because she’s a strong, brilliant person who would get in the way of the military guys that wants to control things, but because she’s whiny and demanding, she is hard to root for. Vanessa does bend the President’s (Yul Vazquez, Magic City) ear and actually seems heroic, but again, the military men have run roughshod over her already and she has to fight her way back into influence. She’s playing from the underdog position, even when she’s in a role that should allow her to call some of the shots.

Furthermore, the only man of any substance in the pilot, Kyle (Michael Graziadel, The Young and the Restless), is much more sensitive than the average joe. A single parent to one of the last kids born, he resists temptation and shows how caring he can be, giving the female viewers the idolized hero they’d like to see represented more than a layered, flawed individual. Given his token spot, I’d like to see more from him.

Now, I enjoy strong female characters, and most of my favorite shows are at least gender-balanced, so I’m not ripping on THE LOTTERY just because of the women who are at the center of it. But other networks, if they resisted the urge to make the show testosterone-heavy, would nurture other aspects of the tale. Instead, it’s these handful of hallmark Lifetime characteristics that override everything else, making the show feel anything but balanced. It may hit the station’s target audience, but it lacks broad appeal and ignores many fans of the genre it resides in. That’s a mistake.

The acting is also a bit hokey, playing up overly dramatic scenes, and with the type of moments when you want to yell at the screen because the protagonists make dumb, easily avoidable mistakes. The weak writing and character development waste the cred that could have been bought with a smart premise and makes THE LOTTERY less than the sum of its parts. I worry it will not go far enough in exploring the effects on the world, instead concerned with two-dimensional players in their flimsy environments.

Of course, this is just a pilot. THE LOTTERY could redeem itself by doubling down on the conspiracy and dangers, as well as social issues, and backing off on Alison’s self-righteousness. I just don’t have confidence that it will.

THE LOTTERY airs Sundays at 10 p.m. ET on Lifetime.