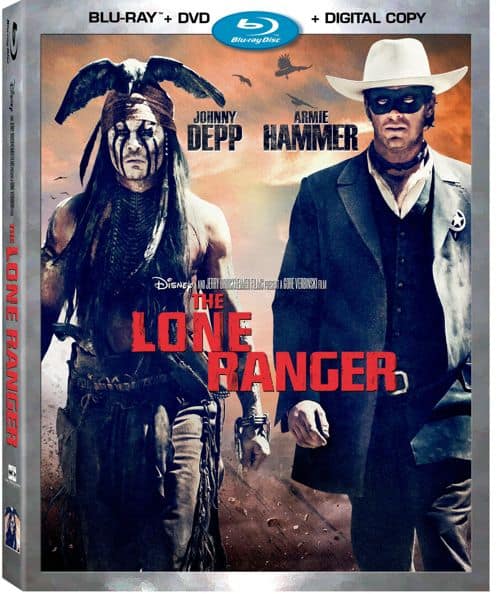 Synopsis: Johnny Depp and Armie Hammer star in The Lone Ranger, from Jerry Bruckheimer Films and Director Gore Verbinski. It’s a wild ride of high velocity action, explosions and gunfights that brings the famed masked legend to life through brand-new eyes. The Lone Ranger (Hammer), the last of his kind, teams with Tonto (Depp), a dark and mysterious vigilante, to seek vengeance after justice has failed them. It’s a runaway train of epic surprises, as these two unlikely heroes must learn to work together before the ultimate showdown between good and evil explodes.

Riding The Rails Of The Lone Ranger (RT: 10:36) – BD & Select Digital Retailers Only
For the production of the movie, director Gore Verbinski had a five mile oval track built along with multiple engines and cars. See the incredible effort that went into crafting such a detailed and important part of The Lone Ranger.

Armies’s Western Road Trip (RT: 14:28) – BD & Select Digital Retailers Only
Armie Hammer (The Lone Ranger) takes viewers on a tour of the scenic locations the production shot in as we see and learn more about the amazing places he went to become The Lone Ranger.

Becoming A Cowboy (RT: 8:02) – BD & Select Digital Retailers Only
Before the cast began shooting the film, they had to learn how to shoot a gun…and ride a horse. In this piece we follow the cowboy (and cowgirl) cast to boot camp, where they got a chance to experience what their characters would really be living like in the Wild West.