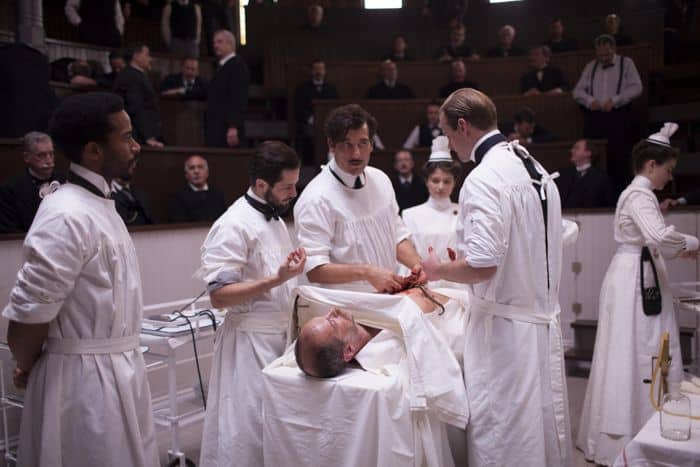 Cinemax finally has a series worth watching! Well, at least in this reviewer’s opinion. In the past, episodes I’ve screened of their shows were always heavy on action and violence and gore, but light on character development and story. This week, though, sees the premiere of THE KNICK, a period medical drama set in New York’s Knickerbocker Hospital at the turn of the previous century.

The lead character in THE KNICK is Dr. John W. Thackery (Clive Owen, Hemingway & Gellhorn). He’s very House M.D.-like in that he’s abrasive, brilliant, and has a serious drug addiction. Thackery learned to lean on the illegal substances from his mentor, Dr. Christenson (Matt Frewer, Orphan Black), and now realizes that it might not be a good idea to continue this habit as he takes over as head of surgery. Thankfully, his skills in treating patients haven’t suffered, but the self-medicating could be affecting his attitude.

The main difference between THE KNICK and House is that THE KNICK is not concerned with a mystery-of-the-week. It seems poised for a highly serialized plot, thankfully, that will deal with some depth among the players, as well as some of the issues of the age. Greed and bribery are running rampant, and race is a major factor in how the dynamic of the cast shapes up. These may be the go-to elements for that era, but they work well when told in an interesting, entertaining way, which THE KNICK does, surely thanks in no small part to its Oscar-winning director, Steven Soderbergh (Traffic).

THE KNICK is not boring, as some period dramas are wont to be. It does seem relatively authentic, for the most part. The costumes and set design are cool. There are some scenes that are more bloody than I’d prefer, a nod to the network it airs on, and the score is distracting at the start of the pilot, not quite in sync with what’s happening. However, these are minor gripes in the overall production, which I greatly enjoy.

Besides Owen and Frewer, both terrific performers, THE KNICK includes Andre Holland (1600 Penn) as Thackery’s new, forced-upon-him, African American deputy, Dr. Algernon Edwards, Eric Johnson (Flash Gordon) as the passed-over Dr. Gallinger, Michael Angarano (Will & Grace) as chipper Bertie, Juliet Rylance (Sinister) as overbearing benefactor Cornelia Robertson, Eve Erson (This Must Be the Place) as naïve nurse Lucy, Jeremy Bobb (The Wolf of Wall Street) as the beleaguered administrator, Chris Sullivan (The Normal Heart) as a jerk ambulance driver, Cara Seymour (An Education) as a closed-off nun, and David Fierro (Birman) as a sleazy health inspector. It’s a full, wide-ranging cast of characters, one sure to keep the story moving forward aplenty.

The writing is smart. Yes, some of the situations are fairly standard, but they’re handled in a rather clever way. For instance, the role Christenson plays in the series is interesting. Also, near the end of the pilot, there comes the moment when viewers know that Algernon must end up fully employed at The Knick, despite the obstacles that have plagued him so far. I thought I figured out what would happen, but the show dodges down a different path, showing its unpredictability.

1900 is an exciting year, with technological and medical revolutions galore. It’s the perfect place for a series like THE KNICK to unfold, adding something new to the television landscape, despite its similarities to a few different genres. Kudos to those who have crafted this beautiful show, and I look forward very much to seeing how it plays out.

Perhaps I’m not quite inspired enough to order Cinemax, which offers very few decent programs and pretty much the same slate of movies as HBO, but definitely enough to seek out all of the installments of THE KNICK wherever I can legitimately find them.

THE KNICK premieres this Friday at 10 p.m. ET on Cinemax.