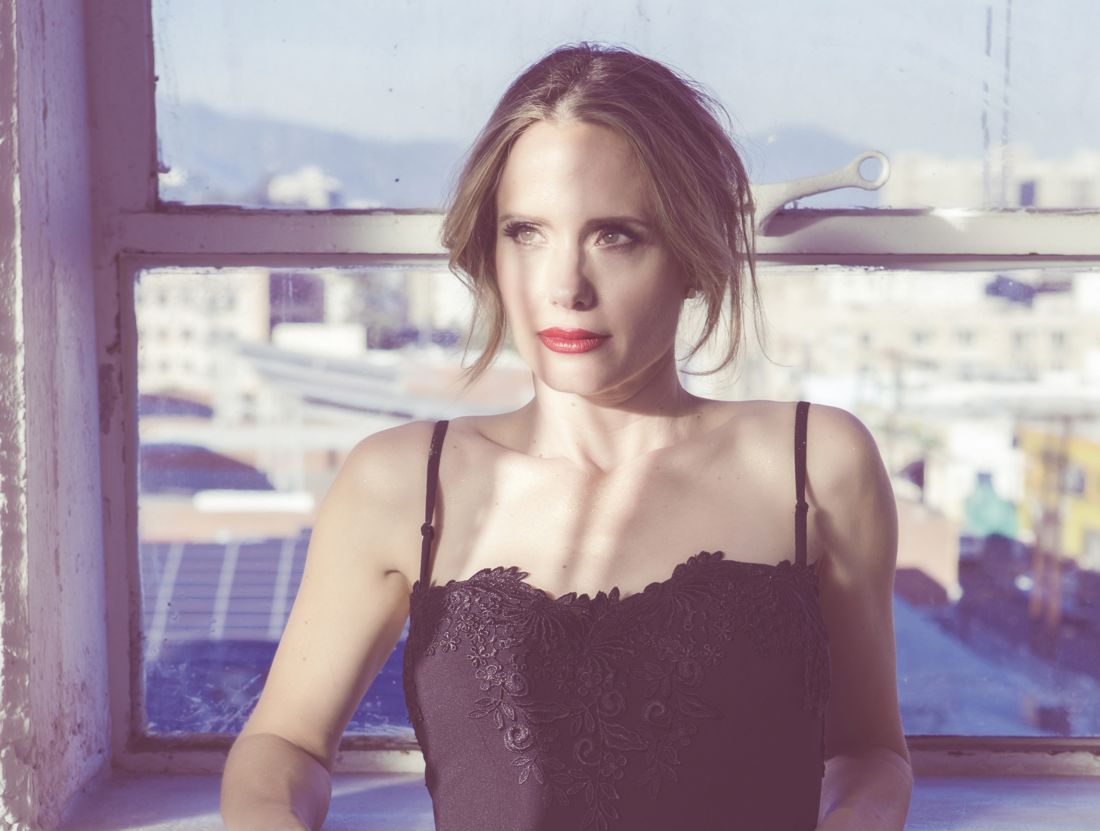 In Amazon Prime’s new family series THE KICKS, Monica Lacy portrays a busy mother working to keep her family’s spirits up after a major family move and help her daughter adjust to playing on a new soccer team.  Monica’s performance as Sharon Burke is charming, supportive, and blends in a light dose of comedy which makes the show sparkle and warms the heart, as well as providing a strong, loving base for her family.  In an exclusive interview, Monica talks about bringing Sharon to life and the fun of working on THE KICKS.

What drew you to the role of Sharon Burke and Amazon’s THE KICKS?
MONICA:  This role is so fun to play!  She’s very eager to be the perfect mom and hold the family together… but then of course things don’t always go as planned.

Who is Sharon and what makes her tick? What are her passions?
MONICA:  Sharon looks like she’s got it all together on the outside, but she’s got a lot more going on underneath.  She is struggling with all the normal insecurities we all have, such as making new friends in California and having a teenage daughter for the first time. I really relate there because I have a 12 year old daughter myself and each day is an adventure; you never know who you’re going to get.

What do you most admire about Sharon?
MONICA:  Sharon is positive to a fault. Can you can be too positive? I’m quite able to get down in the dumps waaaay sooner than Sharon would. She is plucky, very encouraging of her family, and not afraid to make a fool of herself.

How would you describe Sharon and her daughter Devin’s relationship? Does she stand behind Devin’s determination to pursue life as a footballer/soccer player?
MONICA:  She has a great relationship with her daughter Devin, which I really like. I also like that Devin will accept a few words of wisdom from her Mom (speaking as mother in real life). She is supportive of her daughter’s soccer and is at every game.  In fact, I’m sure the day is coming when she will want a little space away from her mom.  Also, there is an episode where I realize perhaps I have been so focused on my daughter that I have not been there in the same way for my TV son, Bailey (played by Gabe Eggerling).

Then what is Sharon’s relationship with her husband Tom?
MONICA:  Sharon has a playful relationship with Tom, but she’s definitely the “strong parent”; Tom can be easily distracted by his kids and his problems. I kind of have to remind him from time to time that he’s the DAD and I need a little help here. In episode 2, I have to really rally to get Devin and Tom out of their pity party and back to being more balanced. They are the two “emotional” ones, and my son and I are the more “sane” ones.

What do you think is the secret of the Burke family’s life balance and success as a family?
MONICA:  I think the fact that we have family meals together and have lots of down time to “be” with each other means that we know what’s going on with each other.  In the first season, it’s a strain that Tom is at his new job for hours on end and the kids are struggling with making friends, etc. But we are able to express what we’re feeling, and we accept each other and encourage each other. We pick each other up, which is really sweet.

What has working on THE KICKS taught you and what do you feel you have learned from that experience?
MONICA:  I feel very akin to all parents in the world. So many of our story lines will look very familiar to any family because they revolve around stuff everyone goes through every day.  All four of us try to make new friends – sometimes we fail, sometimes we have some success. It’s nice to know you’re not alone.  Parenting is hard and enforcing rules is not fun but it’s nice to know I’m not alone out there.  In the show you see Sharon and Tom debate what to do about punishments and how to spend time equally amongst the kids. The Burkes struggle just like everyone with not wanting to over-schedule the kids, or trying to find solo time with each kid. Hopefully families out there will relate with these universal aspects.

I noticed when previewing the show that there seems to be a lot of food scenes in the early episodes. Does that make it easier or harder to perform in a scene with food all around?  Is it all edible or is it just for show?
MONICA:  Ha!  The food was all edible and tasted delicious!  It can be tricky when you are popping a carrot in your mouth because you don’t want to be chewing when it’s time to talk. In general I like it because throwing a meal together and figuring out your daily schedule is the type of multitasking I do in real life. It grounds me and makes the scene feel real. By the end of season 1, you will have seen a LOT of popcorn being eaten at the Burkes’ place!

What is it like working on the set for THE KICKS? Does the fact it is a show made for Amazon feel any different than a TV show made for a broadcast network?
MONICA:  It is a joy to arrive to work on THE KICKS.  The kids are such professional actors – they are so good!  The writers are fun to be around, and I love what they have come up for me to say and do each day.  Basically, every single person I worked with was thrilled to be there and really proud of the show.  It was such a positive experience, just like any other broadcast show. The ONLY difference is that we got to read all the reviews that people shared online. It was crazy, really.  It was fun to hear everyone out there support the show and like the same things I did about it.

What has been the funnest part of working on THE KICKS?
MONICA:  So far, it’s been hanging out and meeting everyone. I love working with the kids and learning about how behind the times I really am!  The wrap party was SO fun.  It was aimed at a bunch of teens, so it was air-hockey, karaoke and ping pong battles with food trucks and a surprise blooper reel to watch. I honestly got chocked up, as we really are one big family.  I also have become real friends with Gabe Eggerling and Sixx Orange, which is cool. They came over on the 4th of July and fit in with my family so well.  And of course, my kids, aged 12 and 14, are super obsessed with the show and with Sixx!

What do you think audiences will really connect to in watching the show?  What can they anticipate next coming up on the show?
MONICA:  The audience will connect with seeing a real family represented onscreen.  We aren’t perfect – we struggle and get into trouble, but we somehow grow in our understanding of each other.  It’s a positive role representation of a real family actually; to have kids that listen sometimes to their parents advice and also to have parents that listen to their own kids advice too.  It’s refreshing to see that.  Season 1 will bring lots of good soccer and sports sequences that will keep the athletes glued to the screens, there are fun team pranks that the little ones will enjoy. and the cliff hangers and surprises will be the icing on the cake.  Honestly, this is a show you can watch all together as a family – there is something for everyone to like!

Do you have any other projects that you are working on that you can share?
MONICA:  I recently signed on to continue being the face and spokesperson for AutoNation. I shoot TV, print and radio. The campaigns are truly fun and original.  AutoNation has dedicated ALL of their fundraising to go towards curing cancer, leading the way with the Drive Pink initiative.  Since my mother has metastatic stage 4 breast cancer, this is a cause near and dear to me.  I feel like I am really making a difference out there, and AutoNation is making a huge dent in the cause. They donated one million dollars from the AutoNation Cure Bowl seats proceeds to the Breast Cancer Research Foundation. I’m so proud to be a part of that kind of commitment.

What advice can you offer other aspiring performers?
MONICA:  I would say keep creating all the time! Do something every day to further your craft of acting: read books, watch seminars, practice a monologue! Observe people, figure out what makes them tick and also watch the really great performances out there.  Immerse yourself in acting class, offer to act in friends projects, film yourself, celebrate the success of others, and be ready because soon it will be your turn up to bat.

To see Monica’s delightful performance as Sharon Burke, be sure to tune in for all new Season 1 episodes of THE KICKS on Amazon Prime available on August 26, 2016.