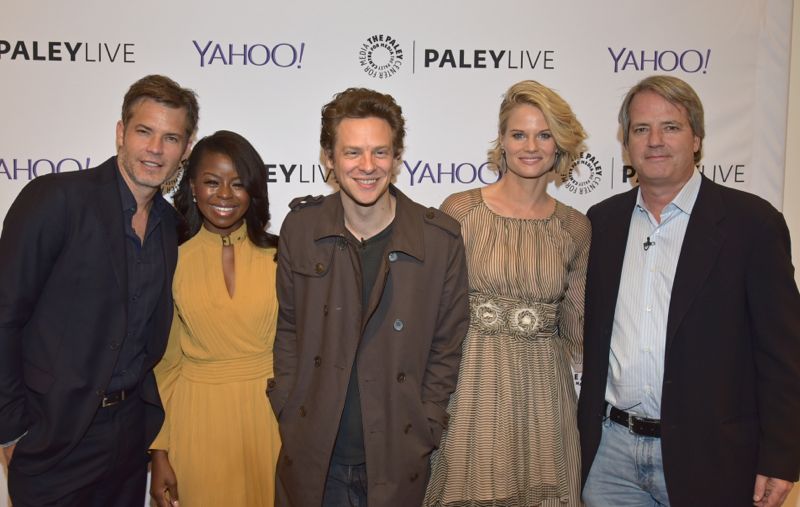 Timothy Olyphant’s response to how much has Raylan Givens has changed over the course of the series was “not much.”  But from that knowing smile, we can surmise that there was a lot more going on with Raylan than just taking down the bad guys on JUSTIFIED.  Raylan, after all, did reunite with his ex-wife and decide to be a father for his baby girl.  That shows remarkable growth for a man who was more of a commitment-phobe when we first met him six seasons ago.  We are certainly hoping that Raylan gets his white-picket fence happy ending!

As for the tortured Ava Crowder, Joelle Carter had a few choice words for Ava and was quick to recommend that Ava get the hell out of Harlan.  That town has held nothing but a repeated broken-heart and life endangering situations for her.

Co-star Jacob Pitts also speculated what Tim’s life would be like if Raylan had never become his partner and his final thoughts on the show’s finale, which he thought was great.

Erica Tazel was a bit more forthcoming about one of her favorite memories from the show, involving a runaway car, and how she did not dare to finish reading the final episode script as she wanted to enjoy the surprise of what happens with the rest of the world as they find out.

As for executive producer, Graham Yost also talked about remembering the epic death of Mags Bennett (Margo Martindale) and provided a heartfelt message for the fans that made the six year journey with them for JUSTIFIED.

To find out whether the seeming bromance between Raylan Givens and Boyd Crowder has finally reached its end point and what is in store for all the characters we have come to love over the course of the show, be sure to tune in for the series finale of JUSTIFIED on Tuesday, April 14th at 10:00 p.m. on FX.