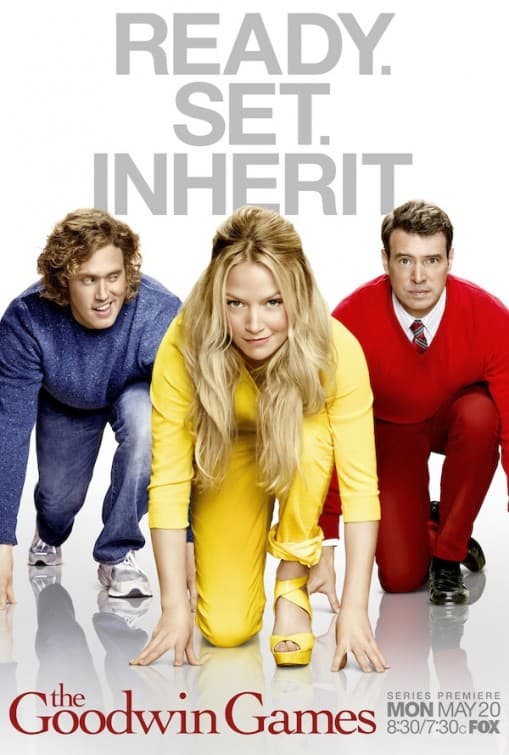 Where there’s a will, there’s a way. And when that will’s worth more than 20 million dollars, you can bet someone’s going to find a way to get the cash.

From the executive producers of “How I Met Your Mother,” THE GOODWIN GAMES is a single-camera comedy that tells the story of three grown siblings who return home after their father’s death, and unexpectedly find themselves poised to inherit a vast fortune – if they adhere to their late father’s wishes.

If any of the Goodwin kids feels like they deserve the money, then it’s HENRY (Scott Foley), the eldest child and an overachieving surgeon. He sees himself as a role model for his less successful siblings – and reminds them every chance he gets. But returning home will force Henry to question the choices he’s made in life, especially as he reconnects with his first love and true soulmate, LUCINDA (Kat Foster).

Middle sibling CHLOE (Becki Newton) was a child math prodigy, and her unofficial role as “the smart one” of the family still sends Henry into fits of jealousy. But long ago, Chloe gave up academics in favor of being a popular mean girl. Now, through a series of hidden messages, her late father will lead Chloe back to her old love of numbers – and to fulfilling her potential as the new center of the family.

Of the three siblings, the youngest, JIMMY (T.J. Miller), could use that inheritance the most. A small-time ex-con and dull-witted guitarist who’s deep in debt to a loan shark, Jimmy may be the family screw-up, but he has more heart than anyone. Like his siblings, Jimmy’s also returning to unfinished business in this town: specifically, reconnecting with his estranged eight-year-old daughter.

Pulling the strings from beyond the grave is the children’s late father, BENJAMIN (guest star Beau Bridges), a college math professor. Guilty over not having parented his kids better in their youth, Benjamin has left behind a series of unique challenges – administered by his estate attorney APRIL (Melissa Tang). Through these tasks, Benjamin hopes he can get his children to rediscover their true selves and learn the lessons he failed to instill in them while he was alive.

Their potential reward? More than 20 million dollars – a fortune that they never knew their father had – and the chance to become the people their father wanted them to be. So let THE GOODWIN GAMES begin!