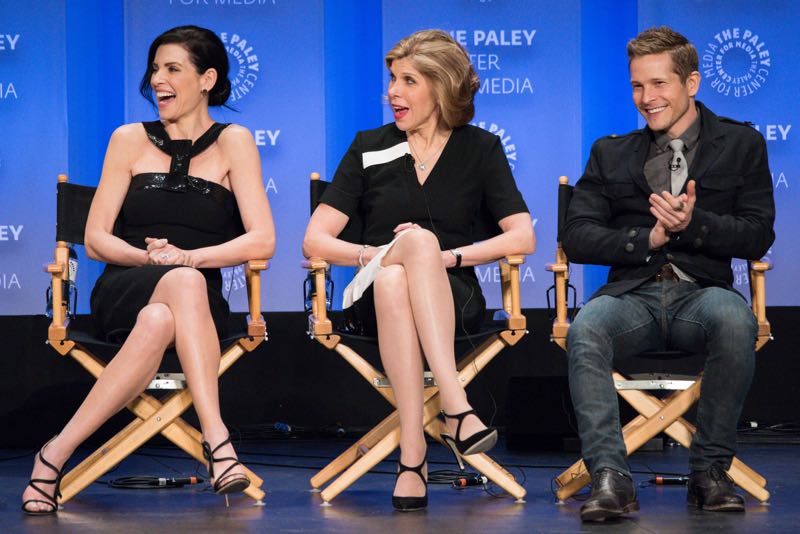 In honor of the THE GOOD WIFE, the Paley Center for Media hosted a special screening and Q&A with select cast and producers of the show at PaleyFest 2015.  It was a night of laughs, revelry and reflection with new CBS late night host James Corden moderating.  (James Corden takes over THE LATE LATE SHOW from departing host Craig Ferguson on March 23rd).  In attendance were show co-creators and executive producers Robert and Michelle King, as well as stars Julianna Marglies, Christine Baranski and Matt Czuchry.

After a special screening of the March 8th episode (entitled “Mind’s Eye” written by Michelle and Robert King), James Corden introduced the guests for a Q&A session that kept the night rolling with smiles, laughter and a cheeky bit of fun —  such as when Matt Czuchry was introduced as good enough to lick, Matt happily obliged by letting James Corden lick him and not to be left out, Robert King made sure to give Corden a big kiss during his introduction.  Another hilarious moment was when Corden inadvertently called Matt Czuchry by his character name and addressed Matt as Cary, to which Matt jumped right up to rush over and give Corden a big hug after Corden gamely tried to explain that Matt and his character sure did look quite a bit alike.

Also getting a big shout-out for the night was former co-star Josh Charles, who’s character death last season still has the show characters and fans still reeling from that tragic loss.  Even James Corden was incredulous enough to ask what the show was thinking (which he phrased much more emphatically) by killing off such a beloved character.  Julianna Margulies explained that after finding out Josh Charles was planning to leave the show after his four-year contract was up that she negotiated for him to stay through the majority of the show’s fifth season so that his character’s story could be wrapped up — and Corden gamely reminded Juliannna that she only plays a lawyer on television and that she is not one in real life, causing her to laugh at the reminder.

During the event’s red carpet arrivals, the cast and producers chatted briefly with press about a variety of pressing fan concerns, including:  what’s going on with the Cary/Kalinda relationship, has the former rift between Cary and Diane been fully resolved, has Alicia’s election campaign thrown the Florrick/Agos/Lockhart firm into a tail-spin, and just where is Robyn and Clarke?

Hear what stars Christine Baranski and Matt Czuchry and the producers had to say:

Another matter of pressing interest is Alicia Florrick’s love life, or lack there of, during the Q&A session and Julianna Margulies was quick to reassure that she too would love for her character to get some quality romance in her life in the coming episodes.  As to which of the many viable male candidates could that be, well, Julianne and the producers were coy on that front, but tonight’s episode “Mind’s Eye” gives considerable clues and insight as to who the next great love of Alicia Florrick may be.  Julianna said, “You can’t waste time on stuff that doesn’t matter.  Will mattered to Alicia and she let him go.”  She stated that she believes that the next time true love is right in front of Alicia, she is not going to let it slip right by like she did with Will Gardner.  She will grab that opportunity and just might finally leave (divorce) Peter — though Robert King hastened to add that THE GOOD WIFE would just be “The Good” if Alicia was no longer a “wife,” so that moment may be a bit further down the line depending on how long the show runs.

Robert King also foreshadowed that the path ahead for Alicia is not necessarily as smooth and easy as fans may think.  He said that Alicia has been seduced by power and her career, she’s made some bad moves and accordingly, the show is making her more of a tainted person.  So while true love may lie ahead for Alicia, so does some reality checks as she continues towards the slippery slope in her quest to be the next State Attorney.

To find out whether Alicia’s head or heart ends up directing her path and ultimately her life, be sure to catch all new episodes of THE GOOD WIFE on Sunday nights at 9:00 p.m. on CBS.

(Photos from the event may seen here)