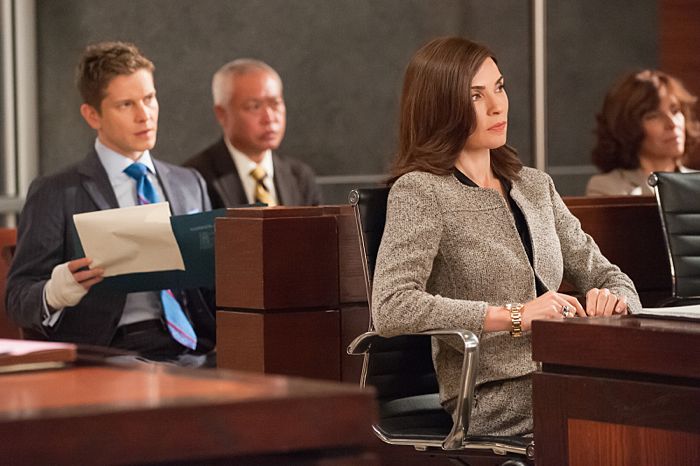 Castro is his own worst enemy. He goes after Alicia’s partner, Cary (Matt Czuchry), and Alicia lets him slide. He bullies her and threatens the future of her firm, and she lets it slide. She even is clearly deciding to stay out of the race after knowing he will win it and how bad he is. Yet, he pushes just a little further, invoking Will’s name in a shameful fashion, and that’s the final straw. If he would just keep his big trap shut, he could retain his job. But because he is scared, he keeps acting out, and eventually, he causes exactly what he is trying to avoid.

I know it isn’t a foregone conclusion that Alicia will win the race, but it seems likely, barring a strong third party entry. She’s pulling way ahead of Castro, and he’s obviously a terrible choice for the job. THE GOOD WIFE is not afraid of shifting around its players, putting them in new positions, and the State’s Attorney’s office is a long-established set piece on the series. It is sad, though, that it could take Alicia out of her new firm right when it’s getting its legs.

The one who will lose the most by Alicia running is Cary. He and Alicia started Florrick, Agos, & Associates together. Lately, their power is eroding because Diane (Christine Baranaksi), Dean (Taye Diggs), and other former Lockhart / Gardner employees have come in and tried to grab power. We see this week that they are gaining ground and Alicia isn’t in any particular hurry to stop them. With her out of the game entirely, Cary stands no chance against the organized team of experienced lawyers.

“Dear God” has many brief cut-scenes showing what is going on at the firm. While Cary, Alicia, and Diane speak with Cary’s case worker, Joy Gubick (Linda Lavin, Alice), viewers are treated to glimpses of their workplace. It’s an interesting way to tell the story of Cary losing his own firm, and it certainly makes one sit up and pay attention as they occur.

Even better, THE GOOD WIFE makes Joy important. At first, she seems to be a clever story-telling device, something the show does from time to time. But late in the hour, Joy goes before a judge and has major sway over whether Cary will go back to jail or remain free. Up to this point, she isn’t portrayed very positively, and it’s no wonder Cary thinks he is screwed. Buy Joy is revealed to be a very fair judge of character, good at her job, and she ends up supporting Cary when no one else can. It’s a beautiful pay off for the character and the episode.

We find out in “Dear God” that Kalinda (Archie Panjabi) didn’t have Cary’s accuser killed after all! It appears in the previous installment that Kalinda gives up the witness to his kingpin boss, spelling certain death. Now, we learn Kalinda also warns the man so he can escape. This will certainly have implications, likely bad ones, for all involved, in both Cary’s case and Lemond’s business. But at least Kalinda isn’t as cold as she appears, and Cary may forgive her for this misstep, as he never would if Kalinda were responsible for a man’s death.

The B plot in “Dear God” is fun, too. Cary’s client, Ed Pratt (Richard Thomas, The Americans, The Waltons), gets tired of the vicious arguing of the courtroom and decides, through civil conversation with his opponent (Robert Joy, CSI: NY), to take the case to a Christian mediator (Robert Sean Leonard, House). This throws Cary, Alicia, Dean, and their opponent, Carter Schmidt (Christian Borle), off their games as they try to adapt to a system based on open honesty, rather than rules of law.

I love this plot for many reasons. One, it highlights how ridiculous the courtroom posturing often gets. Two, it boasts great guest stars. Three, it takes our characters to a new environment. Four, it gives Alicia a chance to bond with her religious daughter, Grace (Makenzie Vega). Five, it all comes together with a very nice ending. And six, it’s just plain fun.

THE GOOD WIFE continues to excel. Each episode, “Dear God” definitely included, presents a complex puzzle that brilliantly comes together seamlessly in the end. The acting is phenomenal, which is why the show can reliably, consistently attract such talented guests and recurring players. The drama is compelling. Each episode is highly entertaining and smart. I marvel at how in maintains this high quality week after week, but it currently shows no signs of slowing down. Great job.