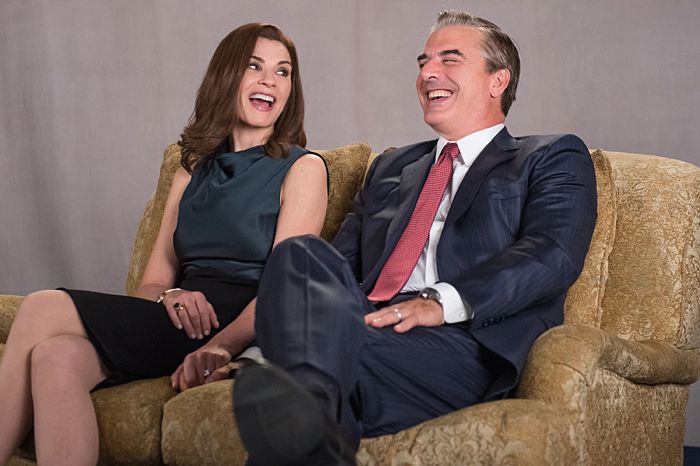 Despite the easy dirty jokes that can be made at the title of this week’s installment of CBS’s THE GOOD WIFE, “Sticky Content,” which just happens to be the ninth episode of season six, the hour is, in fact, quite serious. The FBI plays Cary (Matt Czuchry) a tape of Lemond Bishop (Mike Colter) ordering his execution. Kalinda (Archie Panjabi) works to verify the authenticity of the recording. Meanwhile, Alicia (Julianna Margulies) considers what type of campaign ads to run.

I am terrified that THE GOOD WIFE might kill Cary. On one hand, he seems far too vital to the story to do away with. Just last year, the show killed off someone just as important, which does set precedent, but it seems too early to repeat the stunt. But Cary is a rich character who the writers have dumped on in the past for good drama, and there’s always a chance the show will go there.

Cary thinks the tape is fake, and I’m inclined to agree with him, given all the static on the tape and the untrustworthy way law enforcement has been portrayed this season. But, after Lemond sees Carter Greyson (Victor Williams, The King of Queens), the body guard the firm hires for Cary, the threat becomes quite real, if it wasn’t already. Why else would Cary have a bodyguard for than if he is turning on Lemond and needs protection from the drug dealer?

Cary stupidly goes to confront Lemond one-on-one, just as Kalinda confirms that the tape is real. It may not be the wisest decision Cary can make, but at least he has guts to directly confront Lemond. Cary’s frankness may rise from desperation, which makes him no less brave for laying his cards on the table. It’s one of the best scenes in recent memory from THE GOOD WIFE, which has plenty of excellent contenders for this category, a moment full of tension and pregnant pauses, with both actors involved doing brilliant work.

Cary leaves this meeting apparently feeling reassured, but I’m not sure why. Surely he knows he can’t trust what Lemond says in “Sticky Content.” Lemond doesn’t have the same moral code most of us do, and I would not put lying past him in the slightest. Even when he admits the truth, or part of the truth, to Cary, there is a nagging suspicion he plans on going through with the execution order, maybe even more so than before. If I were Cary, I would not sleep soundly any time soon, even if Lemond should be put behind bars.

I do think it may be time for Cary to cooperate with investigators. Past time, in fact. Having Lana (Jill Flint), Kalinda’s girlfriend, present when Cary, Kalinda’s boyfriend, is played the tape is dumb and brings messy emotions into the mix, which at least contributes to Cary’s resistance. It could also hurt Cary’s legal career to flip on a client. But with a man as cold and dangerous as Lemond, getting him off the streets is necessary. Though the outcome here would have to be witness protection for Cary, which would remove him from the show as surely as killing him does.

The ending of “Sticky Content” shows Lana is likely in trouble for leaking the tape to Kalinda. I don’t care. Lana is whiny and needy and Kalinda belongs with Cary. Though a fired Lana could provide someone for Kalinda to run away with for a happy ending when she departs later this season, which would be acceptable.

In the B story, Frank Prady (David Hyde Pierce) asks Alicia to keep the campaign clean, much to chagrin of Alicia’s campaign manager, Johnny (Steven Pasquale), and advertising editor, Josh Mariner (David Krumholtz, Numb3rs). Can she take him at face value? I want to believe him, as he seems like a decent guy. Alicia’s distrust of him in a previous episode have biased me against him, though. Her wariness is based on circumstantial evidence, and THE GOOD WIFE has not revealed whether he is noble or not. But I have a hard time knowing if I should root for him.

Prady is just one of Alicia’s obstacles in “Sticky Content.” Seeing Peter (Chris Noth) with Ramona (Connie Nielsen) sparks some jealousy in Alicia, almost sending her into the arms of Finn (Matthew Goode). She stops herself, but not by much. Alicia’s later cold dismissal of Peter, telling him she’s annoyed that he threatens their political careers, is insincere, covering her pain. But might she finally be ready to move on from the dead marriage, getting over Peter once and for all? If so, Finn seems a good choice for moving on with.

It does certainly look like Alicia is slowly getting more comfortable with politics. She does have some trouble recreating a sincere moment, but the fact that she listens to her advice guys and lets them play on her sympathetic moments shows a change within Alicia. I don’t know if this is a good thing or a bad thing, politics being a dicey arena, but growth is always welcome, and it will probably make Alicia a tougher competitor in all areas of her life.

“Sticky Content” is another great episode of THE GOOD WIFE, providing engaging plot, intense drama, and enjoyable moments. I’m glad the show has continued to stay at the top of its game, still not having come down from last year’s high benchmark.

THE GOOD WIFE airs at 9 p.m.-ish (depending on football) Sundays on CBS.