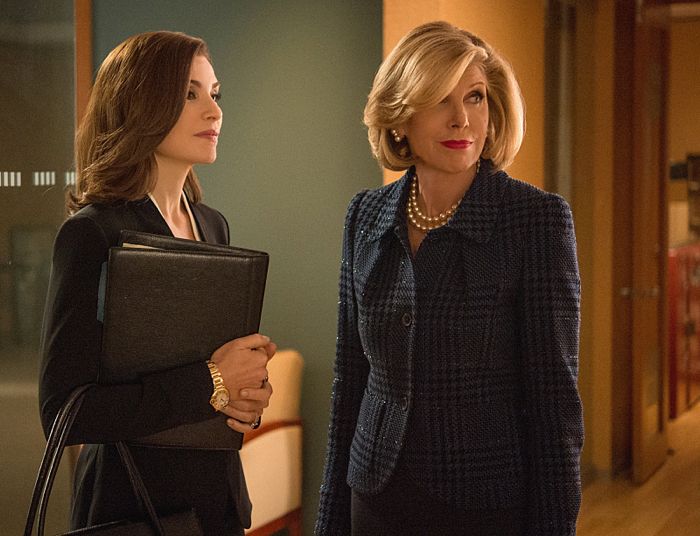 “Message Discipline” is yet another fine installment of CBS’s THE GOOD WIFE. Alicia (Julianna Margulies) struggles to be a politician, something she is not accustomed to and maybe not suited for, in order to keep a new opponent out of the race. Meanwhile, Cary’s (Matt Czuchry) legal woes face several ups and downs.

First, Alicia. Told that a popular commentator, Frank Prady (David Hyde Pierce, Frasier) is thinking about running against her and Castro (Michael Cerveris), Elfman (Steven Pasquale) encourages Alicia to get out in front of this and stop it. Alicia tries, awkwardly asking for Prady’s endorsement and screwing up a softball interview. In the end, she fails in every encounter with Prady, other than the final one, and he is now a very real threat to her candidacy.

Prady is an interesting character because he is introduced as so nice and likeable, but is actually a sleazy politician. The kind face is just a public image he puts up, and while it may not be obvious to the viewer what Prady is doing, Alicia figures it out, calling him on his crap late in “Message Discipline.” Someone who can rally legions of fans behind him but also plays the game makes for an excellent politician, at least so far as running for and winning office goes. It also makes for a dangerous foe for Alicia, though, who has so far only had to deal with the openly-despicable Castro.

Castro exposes himself for the villain he is this week. Finn (Matthew Goode) goes after Cary on behalf of Castro and the DA’s office, introducing new evidence that makes Cary look hella guilty. However, when it becomes clear in the course of the investigation that Cary is innocent, Finn wants to switch gears. Castro refuses to do so, indicating he really is after smearing Cary, and by extension, Cary’s partner Alicia, rather than fighting for justice. Castro is a weasel of the worst kind, and when confronted with undeniable proof of this, Finn quits. He has to.

Finn has been a wonderful addition to the cast of THE GOOD WIFE and his sudden unemployment frees him up to take a bigger role. He talks of opening his own firm, possibly in Alicia’s building, and that is one way to go. A better way might be to somehow get him hired on. He and Alicia have a flirtation, and if he is hired, she would be his boss, basically putting Alicia in the opposite position from where she was with Will. That, and the pathos that goes with that, I’d like to see.

Speaking of the offices, it is extremely weird to be back in the Lockhart/Gardner space. I understand the reasons for it, but as I mentioned in past reviews, it feels like a rare step backward for the series. The setting needs to undergo a major redesign quickly to avoid this.

Back to Cary, I’m gratified to see that the case against him falls apart, thanks in large part to Kalinda (Archie Panjabi). Unfortunately, the witnesses who can clear Cary’s name are murdered, not an unexpected happenstance, and Cary goes right back to square one. Now, he doesn’t have Finn, a righteous man, on the other side, though, and so Castro will likely come at Cary ever harder, completely undeserved. This is depressing because one wants to believe that our legal system works and truth will win. But it does make for some excellent drama television, constantly keeping the audience guessing what will happen as fortune shifts back and forth rapidly.

I’m not sure I completely buy the strong pull between Kalinda and Cary in “Message Discipline,” the one weakness in the hour. Last time they are dealt with as a couple, Kalinda hooks back up with an old girlfriend to help Cary. Isn’t he still mad or jealous? Has he forgiven her so easily? They do make a hot pairing so it’s something I’d like to see again. Except that would lead to Cary breaking his parole again and landing in very hot water, which he doesn’t need.

I may lament Cary’s troubles, but they don’t necessarily have to be over yet. The Cary / Kalinda / Diane (Christine Baranski) side of the episode pairs nicely with Alicia struggling to stay afloat and the chaos in the governor’s office. All together, they make “Message Discipline” another great episode in the larger arcs of the season, forgoing a case-of-the-week, as the series thankfully often does.

THE GOOD WIFE airs some time on Sunday nights, depending on when CBS finally stops worshipping football above all else for the day. Yes, I’m still angry about the network’s poor treatment of an outstanding program, even if stupid sports is how they make money, and football overruns actually raise THE GOOD WIFE’s ratings.