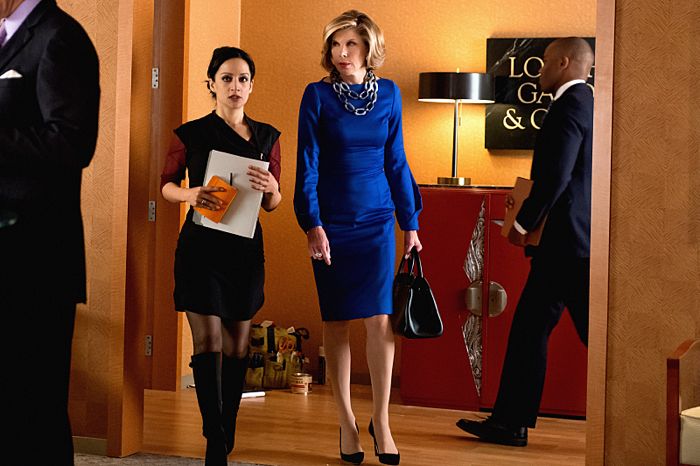 “Old Spice” is the freshest episode of CBS’s THE GOOD WIFE, so take a whiff. Alicia (Julianna Margulies) deals with questions about her beliefs. Diane (Christine Baranski) is on a crusade to win back her old office space. Cary (Matt Czuchry) breaks his parole agreement, landing him in legal trouble again. And love is in the air for two delightful recurring players, lightening the overall mood of a terrific, but dark, season.

Elsbeth Tascioni (Carrie Preston) is one of my favorite recurring characters on THE GOOD WIFE. She’s intelligent, somewhat crazy, and nice as can be, at least to those who deserve it. Seeing Alicia go against her in court last week and play on Elsbeth’s weaknesses is sad, so it’s nice that they get to team up in “Old Spice.” But Elsbeth’s part in this episode is not about that friendship. No, instead, THE GOOD WIFE brings her back to show her fall in love.

The object of her affection is Josh Perotti (Kyle MacLachlan), a government employee who is equally infatuated with her, if not more so. Their courtship is as amusing as it is sweet, and the way they one-up each other just turns them on, rather than angering or causing tension. They keep their professional and personal lives separate enough, not allowing attraction to get in the way of doing a good job. But at the end of the day, they tangle on Elsbeth’s desk and share a dated pop song.

I know this is a goofy little side story, but I like it a lot. For one, it ties into an interesting case. For another, this season is very serious and bringing in Elsbeth keeps the series from going as dark as it did last spring. I like dark, too, but THE GOOD WIFE always has a fun charm, and this subplot keeps that up. It works so well that I’d like to see them a lot more, though it’s likely they’ll disappear for awhile, and then show up married in a few months or a year down the line.

The heavier stuff I refer to is pretty focused on Cary. He doesn’t mean to break his parole, and I do think the court-appointed supervisor, Joy Gubick (Linda Lavin) understands that. She is a stickler for the rules, but she isn’t unfair in the execution of her duties. Cary is just acting stupidly and carelessly, flaunting recommended guidelines, even if his infraction is a minor one.

I assume that Cary strays because of the pressure at work. He is being pushed out of what he has created, Alicia’s declaration of support for him in “Old Spice” aside. As the firm takes back many of the partners they left behind and moves back to the former office space, he feels like he is out of control, which he is. It’s unfortunate that Cary can’t blow off steam like other people because of the position that he’s in, as he makes mistakes, but doesn’t do anything too ridiculous.

Thankfully, Cary doesn’t go back to jail. He has to stay away from Kalinda (Archie Panjabi) and can’t be out after 9 p.m., and either one of these could be broken in the service of his job. But I do think he’ll watch himself and try to stay out of further trouble, if at all possible. We’ll see if he manages to.

What I want to see is more of Cary interacting with Diane. Alicia is running for office so it could very soon just be the Diane and Cary running the show together. Diane comes in against Cary’s wishes, but now that’s she’s here, it’s time to see them strike a balance. Cary isn’t even present for the office-picking scene, and apparently takes a lesser space, which isn’t fair. Cary is a great character who deserves a bit better.

Diane’s triumph over David Lee (Zach Grenier) and Louis Canning (Michael J. Fox), ably assisted by Kalinda, is delicious and rewarding. I don’t like that THE GOOD WIFE is going back to the old, familiar sets, which feels like a step back after so much change, but Diane’s victory is hard-fought and satisfying. Those guys are villains and they deserve to lose. Diane is a hero and an inspiration.

Alicia’s story in “Old Spice” is a bit complicated, and highlights the ugly side of politics. She is an avowed atheist, but atheists don’t win offices in the United States. It’s not fair, and as one myself, I see it as a sign of intelligence, not a flaw, but it’s the currently reality. Alicia being forced to hem and haw around the issue costs her something, feeling like she’s cheating or lying. Yet, at the same time, one can understand why she does it, the only practical way to fight such an injustice.

I do feel like Alicia’s public stance will cause conflict between her and her daughter, Grace (Makenzie Vega). The series does a terrific job of portraying both women’s beliefs without causing conflict between them, at least recently, as Alicia tries to understand if Grace is more than just the naïve child she sometimes seems. I think Alicia is developing respect for the opinionated, willed woman her daughter is becoming. But because Grace is getting attention for “swaying” Alicia, attention she can’t shrug off without hurting her mother’s campaign, Grace becomes implicit in the maneuvering, which feels dishonest, understandably so. I could see this blowing up in Alicia’s face.

Character-driven stories and opposing viewpoints combine to make THE GOOD WIFE an excellent watch. It can take two sides of an issue, and paint both as right. The drama comes from complex circumstances, rather than simple conflict, which is why it’s so much more than a typical lawyer show.

THE GOOD WIFE airs Sunday nights on CBS after whatever time football (which, in my opinion, is as backwardly overvalued as religious beliefs are in our society) is over.

I realize that last statement may anger some, and that is not my intention, so I apologize if anyone saw it as a personal attack. I’m just frustrated to see the things I value overrun by others’ interests on a consistent basis. You can have your religion and football if you like it. Just don’t let it push capable people out of politics or screw up viewing times for a beloved show.