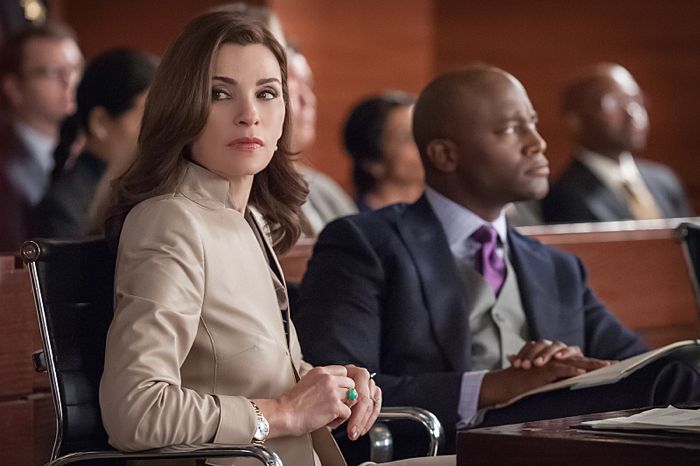 CBS’s THE GOOD WIFE has a very intriguing recurring character in Elsbeth Tascioni (Carrie Preston), one they cannot resist bringing out on a fairly regular basis, thankfully. This week’s episode gives us a peek at the genius who is easily distracted by “Shiny Objects,” letting her take the opening of the hour, and showing glimpses of the way her brain works throughout. It is a fascinating.

Unfortunately, Elsbeth is not the focus of most of the hour. Don’t get me wrong; I really like “Shiny Objects” as an episode. It has some wonderful moments, exciting legal battles, and the type of compelling drama that THE GOOD WIFE is known for. The story is interesting and the characters are well-developed. It’s just, with the Elsbeth-centric opening, I was looking forward to more of the quirky lawyer, and am disappointed she is only in a few scenes, in a relatively minor capacity. Even her love interest, Josh (Kyle MacLachlan), showing up is barely a quick blip. She should get more.

It’s hard to point to one main plot for this week’s episode because there are several. Obviously, there’s the case where Alicia (Julianna Margulies) and Dean (Taye Diggs) face Elsbeth in court is important. Then, there’s Kalinda’s (Archie Panjabi) reunion with Lana (Jill Flint), an FBI agent, which is connected to the tale of the law firm’s computer data being held for ransom and the search for the blackmailer. This also leads to Diane (Christine Baranski) having to face David Lee (Zach Grenier). And Alicia has to plan the important announcement of her candidacy. It’s a pretty full hour.

If pressed to pick a favorite subplot of “Shiny Objects,” other than the Elsbeth stuff, I’d have to go with the Diane vs. David Lee showdown. David Lee has an email that Diane needs. Diane still controls the lease for the office space David Lee uses. In recent struggles, Diane has been losing, but now she has a much bigger hand to play. She finally gets one over on him, getting him to give up the email in exchange for her consideration of transferring the lease, not a promise to do so, proving how much more important the lease is than the email. That should wipe the smirk of his smarmy face for an afternoon.

I have to say, though, I’ll be disappointed if Florrick, Agos, & Lockhart moves right back into the old Lockhart/Gardner building. Admittedly, the new space has plenty of flaws, but it’s been nice to get some fresh sets. I assume the former place would undergo some kind of makeover, if for no other reason than to provide three main spaces for the three named partners. But part of THE GOOD WIFE’s strength is that it keeps moving forward, and returning to Lockhart/Gardner would an uncharacteristic step back.

One thing that is not a step back, though it some ways it may appear to be, is the recreation of that famous Alicia / Peter (Chris Noth) press photo on stage. Now, it’s Alicia running for office and Peter supporting her, rather than The Good Wife standing by her cheating man. It’s not repetitive because the power dynamic has shifted so much, even though Peter still needs her more than she needs him, and Alicia has come quite far. It highlights Alicia’s arc and growth more than anything.

Unfortunately, this may also be the end of Alicia and Peter as a couple. They’ve never been all that solid, throughout the course of THE GOOD WIFE, but after Will’s death last year, things have been even more tense between them. When Alicia refuses to give in to Peter’s demand that Finn (Matthew Goode) not introduce her, it almost ends their arrangement, Peter being furious and not used to having to give in to Alicia. It shows us just how far apart the two have become, and makes any type of reconciliation, which is a long-shot before this anyway, totally unrealistic. I hope there are no shippers for the two of them left.

Speaking of shippers, Kalinda / Cary fans will be let down when Kalinda falls back into bed with Lana in “Shiny Objects.” Kalinda definitely cares much more for Cary and sees Lana as a tool she needs to use, and yes, sex is part of that. But I doubt Cary will understand if he confirms what he already suspects about the girls. And any hope that Kalinda could just pick up with Lana after losing Cary disappears when Kalinda finally feels something for Lana, but for the wrong reasons, driving Lana away.

Kalinda has, arguably, the messiest love life of any character on THE GOOD WIFE. Cary is her chance at stability, but (SPOILER ALERT!) since the actress is leaving the series at the end of the year, there’s virtually no chance of them ending up together. I feel like Kalinda only seems put together, and knows what she wants least of anyone. I’m rooting for her to find meaning by the time of her departure, as she deserves it.

“Shiny Objects” is not a “big event” episode (we’ll probably get one of those soon for November sweeps), but it is a fine hour of television, something THE GOOD WIFE manages to pull off most weeks, one of the few broadcast shows to do so. As long as they keep up this level of quality, I’ll watch them forever.

THE GOOD WIFE airs Sundays at 9 p.m. ET. (or so, depending on football run-overs) on CBS.