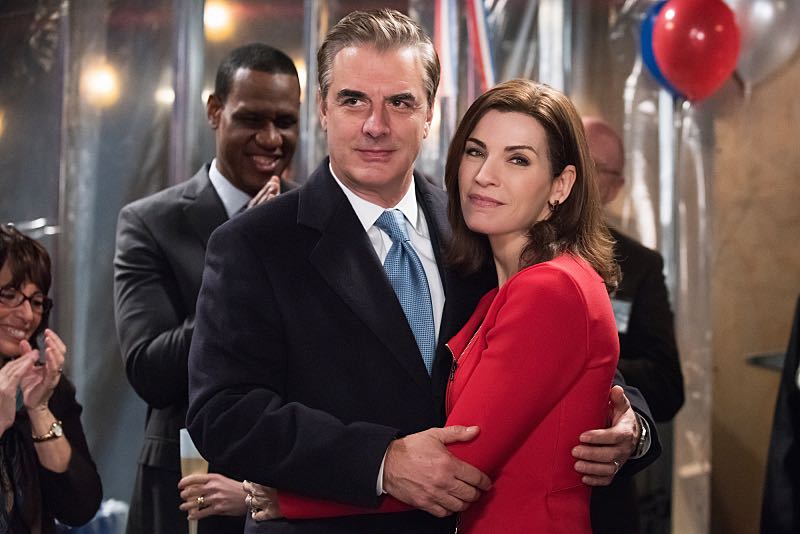 THE GOOD WIFE gets into some “Red Meat” in this week’s installment on CBS. You may take that title literally, as Diane (Christine Baranski) goes hunting with her husband and his rich, conservative buddies. But there is also ample opportunity to take it figuratively. The Good Wife is always juicy and filling, and “Red Meat” is no exception.

The main plot revolves around Election Day for Alicia (Julianna Margulies). Things are looking good for her, so Marissa (Sarah Steele) and Finn (Matthew Goode) try to distract her with video games so she doesn’t worry too much. Unfortunately, a little worry is necessary when Peter (Chris Noth) blows up Alicia’s chances, sending Josh (David Krumholtz) and Johnny (Steven Pasquale) scrambling. They even considering having The West Wing’s Melissa Fitzgerald (herself) do a robo-call, though they don’t know who she is. Thankfully, Eli (Alan Cumming), almost always a fan of Alicia’s these days, and relatively honorable where she is concerned, convinces Peter to help fix his mistake, and Alicia wins.

Peter and Alicia’s marriage is over. This has never been more clear than in “Red Meat.” When Eli has to convince Peter to help his wife after Peter is the one that screws things up, that’s a sure sign there’s nothing left there. He has little respect or love for her, using her merely as a political tool. She has seemingly shut down most of her emotion towards him as well, and hopefully now that the election is over, they can get a divorce. It might not be what Eli wants, or the most helpful thing for their public image, but it’s time for them to move on.

Alicia has two romantic options going into “Red Meat,” but both seem to be gone by the end of the hour. Although Finn offers to cancel a date to go out with her, Alicia doesn’t let him. And while I think she would take up with Johnny, Johnny sees Alicia and Peter together and wrongly assumes their marriage is still viable, so he leaves town. Either would be good matches for Alicia, but I have to admit, I’m sad that Johnny seems less likely at this point because they were very good together. Thank god Marissa is sticking around to help Alicia, even if she only provides for less physical urges.

Alicia offers Prady (David Hyde Pierce) her number two spot and he declines. This is disappointing, but understandable. He doesn’t believe in Alicia’s approach, and how can he serve an office he doesn’t respect? A friendship of a sort may have formed between the two, and I do hope they come back into one another’s circles in the future. But they are just too far apart in outlook for the District Attorney’s office to be place for it.

While this is going on, Diane is off hunting with Kurt (Gary Cole). She can’t resist turning it into a work trip when she finds out a big name in the tech industry, Gil Berridge (James Snyder, Adonis), is present, but that’s still relaxing for her, as she enjoys her career immensely. Despite screwing things up with Gil, she does find herself in an engaging political debate with R.D. (Oliver Platt, The Big C), who turns out to be even richer and much more open to her pitch, providing her firm stays out of abortion issues.

“Red Meat” is pure fun for Diane. We get to see her out of her element, but also somehow in her element at the same time. She’s surrounded by those she has fundamental disagreements with, but as in her marriage, she makes it work, and she ends up having fun. Diane is a complex, wonderful character, and I’m glad that THE GOOD WIFE gives her this focus, away from cases, to explore her personality.

Back at the firm, that leaves Cary (Matt Czuchry) and David Lee (Zach Grenier) as unlikely partners. Thank goodness Diane will soon be back, as I can’t imagine David Lee getting a position of too much power again, given his recent bad behavior. Still, Alicia leaving the firm will shake things up, especially for her co-founder, Cary, and I look forward to The Good Wife milking the dramatic possibilities.

Finally, Kalinda (Archie Panjabi) continues to work for Lemond (Mike Colter) in a situation she should absolutely not be in. That Lemond has decided to get out of the drug business after his son is kicked out of yet another school doesn’t improve Kalinda’s position any. Now Lemond wants Kalinda and Alicia to protect him for jail, which will not be easy. I don’t think Lemond will find Alicia all that cooperative, no matter what he did for her campaign, and Kalinda is the easiest one to take his frustration out on. Even if Alicia doesn’t like Kalinda any more, I’m sure she’ll try to protect the investigator from harm. Will she be able to?

We still have half a dozen episodes in this season of THE GOOD WIFE, but “Red Meat’ is starting to build towards the finale, as have other episodes that have come before it. The story is extremely serial at this point, and it’s enjoyable to watch each unexpected new twist.

The only complaint I have about “Red Meat” is, where are Alicia’s children? Shouldn’t they be around while she’s waiting for the results, and certainly at the celebration after?

THE GOOD WIFE airs Sundays around 9 p.m. ET (depending on inexcusable sports overruns) on CBS.