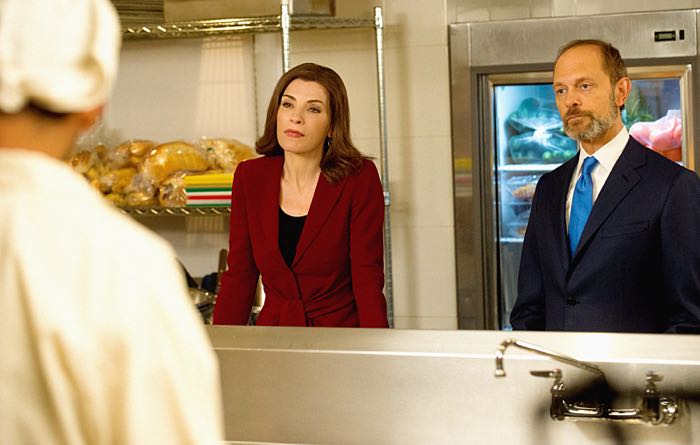 The latest episode of CBS’s THE GOOD WIFE, which aired an hour later than usual last night for some reason, is “The Debate.” Alicia (Julianna Margulies) faces Frank Prady (David Hyde Pierce) in a televised debate, while at the same time, Diane (Christine Baranski) and Cary (Matt Czuchry) square off with David Lee (Zach Grenier) in Neil Gross’s (John Benjamin Hickey) divorce, and Peter (Chris Noth) tries to keep race riots from erupting in Chicago.

Alicia’s evolution to politician has been interesting to watch. She is so completely anti-politic at the start, and slowly finds her footing in a thing that she begins to care about. She gets into the State’s Attorney’s race to fight a corrupt incumbent, but in order to do a decent job at running, she has to convince herself she deserves to be there. Thus, even when that opponent drops out and she likes her new antagonist, somewhat anyway, she stays in because she now wants to do this thing she talked herself into. It’s a pretty cool example of character development.

During “The Debate” itself, Alicia starts off rocky, then gets on track just before the proceedings are put on hold, wherein she and Frank continue their talk, sans moderator, for the kitchen staff, much to the chagrin of their campaign managers. This may be slightly silly, but THE GOOD WIFE is just so good at writing these moments of high drama. Were Alicia and Frank not totally believable, a credit to both performers and the writers, none of this would work. Instead, it’s a gripping narrative for those who love good political stuff.

I actually hope Alicia wins. It would suck to see her taken away from Cary and Diane, but the firm has plenty of people to go on without her. The State’s Attorney’s office has long been a part of the show, too, and seeing Alicia there would shed even more light on the job. Plus, the prosecutor / defense chemistry is almost always one of friction. It would be interesting to see Alicia, who has respect for defense attorneys, take over in that role, changing the dynamic of the justice system in fictional Chicago.

Alicia’s current problems are not so much in the race itself, but in the parts of her life affected by her new position. Cary and Diane make decisions without consulting her, such as hiring back David Lee, which somewhat justifiably upsets Alicia, though the pair can be forgiven for taking that step. They support Alicia’s candidacy, but they have a job to do, too. She did the exact same thing while Cary was embroiled in legal troubles. Her marriage with Peter is suffering again because once more he’s been caught with another woman, even though their union is merely for show at this point and Peter quickly ends things. Not to mention, Alicia accidentally discovers her own campaign manager, Johnny (Steven Pasquale), may have feelings for her.

I didn’t see the Alicia / Johnny thing coming. If Alicia were to be with anyone other than Peter, Finn (Matthew Goode) seems the natural choice. But there’s something kind of cool about the two of them together, so I’m kind of hoping that THE GOOD WIFE does go there. After the election, of course, as she won’t win if her marriage is known to be falling apart.

Alicia is asked about the state of her marriage during “The Debate,” and she responds quite aggressively that it’s none of the press’s business. I feel like this is a tough topic. On one hand, if you put yourself in a position where you’re asking the public to trust you, what kind of person you are is their business. On the other, those kinds of questions can’t be asked in an interview for virtually any other job, so why should they be brought up here? It’s a complex issue, but for Alicia’s personal situation, she handles it beautifully.

Another, even more complicated matter unfolds on the streets of Chicago, eerily bringing to mind the recent events in Ferguson, Missouri, which THE GOOD WIFE references in text on screen at the start of the hour. We’re at a crucial moment for race relations and police power in the United States. The system is obviously broken, but an easy fix is hard to find, as Alicia and Frank argue in their kitchen debate. And as one staff member asks them, why do these white people think they can or should solve it for everyone else? There’s no really good way to broach things, but Peter does the best he can while stepping up with the local religious leaders.

Is Peter acting out of personal self-interest or because he wants to help? Probably a bit of both, but that doesn’t make him wrong or bad. He advocates peace, and gets others to do the same. He doesn’t have a solution yet, but he’s right to try to keep violence from erupting, as that doesn’t solve anything. Peaceful protests are completely justified, and it’s easy to see how some may take it a step further out of frustration. It just doesn’t help their cause in the eyes of the larger society if they hurt anyone. Nor does letting police who have acted wrongly get away scot free, of course. I applaud THE GOOD WIFE for tackling a divisive, important issue before there is a clear path through it, sparking conversation without being teach-y or preachy.

In all, “The Debate” is yet another example of great television from the best drama series on the broadcast networks. As usual, I cannot wait for next week, nor can I predict with any degree of certainty what will happen.