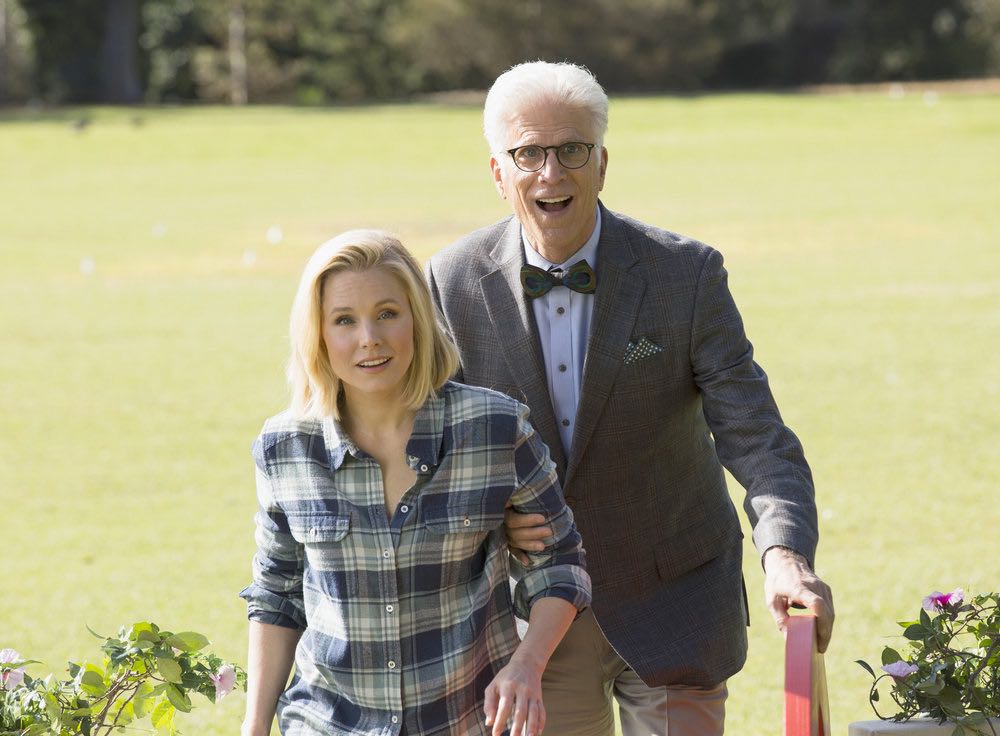 THE GOOD PLACE will be on NBC Thursdays at 8:30PM. No, I’m not saying whatever show fills that time slot is good, though in the case of THE GOOD PLACE, it’s very good. It’s the title of a new sitcom about a woman who mistakenly goes to the wrong afterlife and her attempts to stay there. No, it’s not too sacrilegious, not attacking any faith in particular nor bashing religion much. Yes, it is clever, fresh, and funny.

Kristen Bell (House of Lies, Bad Moms, Veronica Mars) stars as Eleanor Shellstrop, a former pharmaceutical salesperson who cheated old people out of their money for ineffective drugs, and who died in a very embarrassing manner. Mistaken for an altruistic woman of the same name, Eleanor finds herself in what we might call heaven, a small city with lots of frozen yogurt, no cursing, and (mostly) very large houses.

Who would build such a place? Well, that’s the work of Michael (Ted Danson, Fargo, Cheers), a brand-new architect who has just created this town as his first solo project. As such, I guess there are bound to be a few mistakes as he figures his way through.

Eleanor doesn’t want Michael to find out about this particular mistake, though, because that would mean she has to go someplace worse. So what we’ve got is a bad person taking advantage of a bunch of good people. I mean, the other tact to take would be to become a good person herself, and I won’t say that Eleanor won’t try to do that, but it seems much more likely she’ll take the easy path as much as possible, given what we know about her.

One of the first things Eleanor does is drag in an accomplice, Chidi (William Jackson Harper, True Story, The Electric Company), the other Eleanor’s soulmate. Right away, that tells us something about her and how she’ll handle the situation, which makes absolute sense as we learn the type of person she was.

I feel like there might be something going on in THE GOOD PLACE that isn’t immediately obvious. Is the whole thing a test for Eleanor? Is this her purgatory? Is this place not as ideal as it seems? Do the architects make mistakes so often? Is Chidi really this Eleanor’s soul-mate, both forced to grow through interacting with one another?

Or is this a story about two screw ups, Eleanor and Michael, who are in a bit over their heads and have to find their way? That could certainly be equally compelling, and is the more straight-forward way to take the premise.

For either of those two theories to be fully realized, THE GOOD PLACE must get multiple seasons on the air. I adore Bell and Danson, and these two characters are terrific for them, allowing them each a showcase to shine. I thoroughly enjoyed the first episode, both in terms of premise and cast, the latter of which also includes Jameela Jamil (the DJ and writer), Manny Jacinto (The Romeo Section), and D’Arcy Carden (Broad City). I am very excited to watch more of it.

But I do worry it’ll be too high-concept for broadcast network audiences. It reminds me a little of The Neighbors in that we’re seeing a bit of hyper-reality and characters we can’t necessarily relate to. This doesn’t make the series any less entertaining, and in fact, is a good sign in my book. But viewers can be fickle, and I worry THE GOOD PLACE won’t catch on the way that it should. I’m hoping the two very recognizable leads (who are also very talented, but that’s less important in the context of this point) will draw people in to at least give it a try. As long as its potential audience is aware of it, I think it’ll succeed.

THE GOOD PLACE premieres Monday, September 19th at 10/9c, before settling in its normal timeslot Thursdays at 8:30/7:30c.