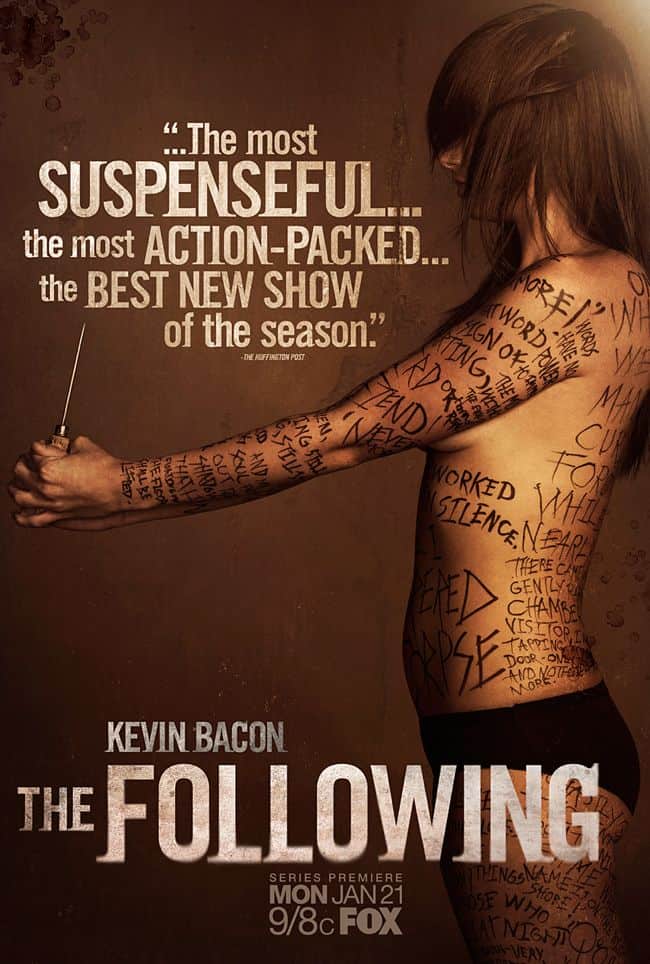 THE FBI estimates there are currently up to 300 active serial killers in the United States. What would happen if these killers had a way of communicating and connecting with each other? What if they were able to work together and form alliances as they left a trail of blood across the country? What if one brilliant and charismatic, yet psychotic serial killer was able to bring them all together and activate a cult of believers following his every command?

Welcome to THE FOLLOWING, the psychological thriller from creator/executive producer Kevin Williamson (“The Vampire Diaries,” “Dawson’s Creek,” the “Scream” franchise).

When notorious serial killer JOE CARROLL (James Purefoy) escapes from death row and embarks on a new killing spree, the FBI calls former agent RYAN HARDY (Emmy Award nominee Kevin Bacon) to consult on the case. Having since withdrawn from the public eye, Hardy was responsible for Carroll’s capture in 2003, after Carroll murdered 14 female students on the Virginia college campus where he taught literature.

Hardy is a walking textbook of all-things Carroll. He knows him better than anyone; he is perhaps Carroll’s only psychological and intellectual match. But the Ryan Hardy who broke the Carroll case years ago isn’t the same man today. Wounded both physically and mentally by his previous pursuit of this serial killer, it’s been a long time since Hardy has been in the field. This investigation is his redemption, his call to action.

In contrast to the original investigation years ago, Hardy isn’t calling the shots on this case. He works closely with an FBI team, which includes young, razor-sharp MIKE WESTON (Shawn Ashmore) and FBI Specialist DEBRA PARKER (Annie Parisse), who is brought in to lead the investigation of Carroll and his followers. Although Weston seems to idolize him, most of the team considers Hardy to be more of a liability than an asset. But Hardy proves his worth when he uncovers that Carroll was covertly communicating with a network of killers in the outside world. It quickly becomes obvious that he has more planned than just a prison escape, and there’s no telling how many additional killers are out there.

The tension rises when Carroll’s accomplices kidnap his intended last victim (guest star Maggie Grace) from 10 years ago. Hardy becomes ever more determined to end Carroll’s game when he realizes that the psychopath intends to finish what he started.

The intense, spellbinding drama will follow Hardy and the FBI as they are challenged with the ever-growing web of murder around them, masterminded by the devious Carroll, who dreams of writing a novel with Hardy as his protagonist. The reinvigorated Hardy will get a second chance to capture Carroll, as he’s faced with not one, but a cult of serial killers.

THE FOLLOWING is from Bonanza Productions Inc. in association with Outerbanks Entertainment and Warner Bros. Television. The series is created, written and executive-produced by Kevin Williamson. Marcos Siega (“Dexter,” “The Vampire Diaries”) also serves as an executive producer and directed the pilot. “Like” THE FOLLOWING on Facebook at www.Facebook.com/TheFollowing. Follow the series on Twitter @TheFollowingFOX and join the discussion at #thefollowing.