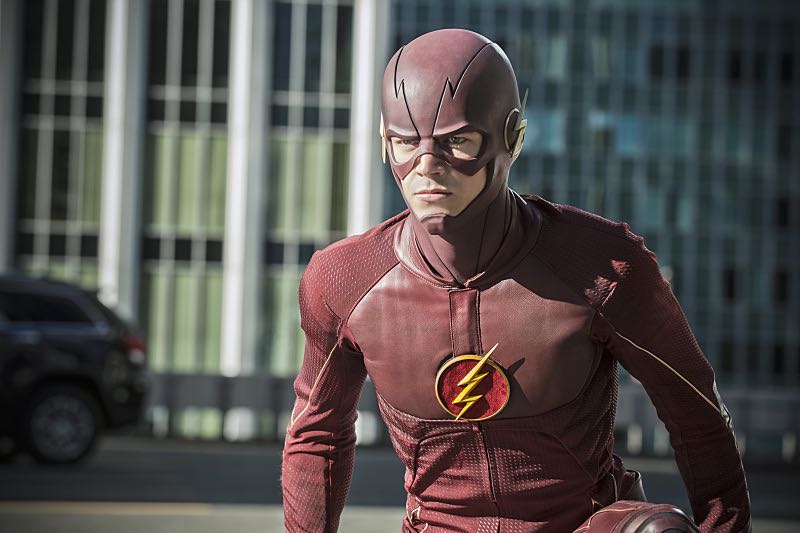 After crushing hearts at the end of Season 1 of THE FLASH with the death of Eddie (Rick Cosnett), Season 2 opens with a bit of a time-jump as Barry Allen has chosen to isolate himself with his grief and guilt.  Tricked, betrayed and feeling powerless to the hands of fate after all that he went through with Dr. Wells aka Reverse Flash (Tom Cavanagh) last season, Barry feels the need to redeem himself and to not risk the lives of those he loves any further.

Unfortunately, someone out there besides the Reverse Flash is not feeling very forgiving and will not let Barry wallow in his solitude any more — enter the Atom Smasher (Adam Copeland).  Central City may feel like they need to do something to honor their publicity-shy hero and has chosen to host a day in his honor with Flash Day, but the Atom Smasher just sees it as his chance to wreak some well-deserved havoc and inflict some pain on Barry.

Fortunately for Barry, he is not truly alone.  As if Iris (Candice Patton), Joe (Jesse Martin), Caitlin (Danielle Panabaker) and Cisco (Carlos Valdes) would ever abandon Barry and let him face the never-ending supply of meta-humans on his own — not to mention the ever-ready Ronnie Raymond (Robbie Amell) and Dr. Martin Stein (Victor Garber), who always willing to help out in a pinch as Firestorm.

There is a saying that evil never truly dies, nor does it sleep.  Central City needs their hero and no hero is truly and island.  No matter how many acts of self-redemption and atonement Barry make seek out, the only thing that will truly heal the pain in his heart is helping protect and save the people of the city he loves.  A hero in hiding no more, Barry has but one real choice:  can he really do it alone? As we already know, that choice has been made for him.  It is just a matter of seeing how quickly Barry realizes it.

Season 2 promises to deliver another non-stop thrill ride of meta-human adventures and perhaps a new love interest looming on the horizon for Barry.  So be sure to tune in for all new episodes of THE FLASH, starting with the Season 2 premiere on Tuesday, October 6th at 8:00 p.m. on the CW.