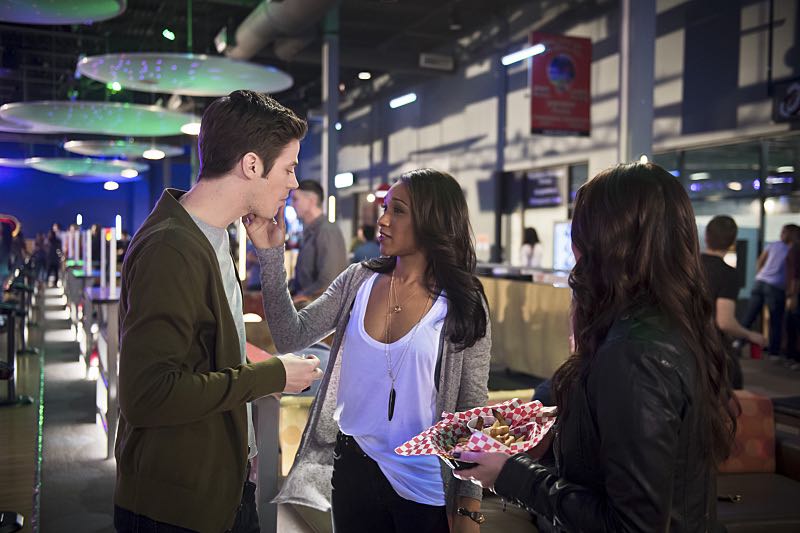 When the CW series THE FLASH debuted last Fall, it began with the encounter with Clyde Mardon (Chad Rook), a metahuman who could manipulate the weather.  Unfortunately, Clyde’s reign of weather-terror ended abruptly once Detective Joe West (Jesse L. Martin) shot him — and now that is coming back to haunt him as Clyde’s brother, Mark Mardon (Liam McIntyre) has come to Central City looking for Joe, intent on making Joe pay for Clyde’s death.  Mark and Clyde were both caught in the particle accelerator blast that transformed Clyde and Mark, so that they both can manipulate and control the weather elements; and Mark has had nearly a year to fine-tune his abilities, making him even more deadly and lethal than Clyde and Cisco (Carlos Valdes) quickly dubs Mark, the Weather Wizard.

So what exactly can someone like Barry Allen (Grant Gustin) do when face by the likes of the Weather Wizard?  Barry, even with his super-speed abilities, seems a bit out of his league when confronted with high winds, sheets of ice and bolts of lightening being hurled his way.  Also, Mark is more intent on Joe, so how can Barry protect both Joe and Iris (Candice Patton) from Mark’s plan of vengeance?  Keep an eye on the Weather Wizard as he is not just another metahuman, he is one that has a personal agenda and more than one person is going to fall under his wrath.

Complicating matters now that Barry is dating Linda (Malese Jow), Iris just cannot seem to stay away from Barry.  Barry and Iris’ friendship is not exactly as “friends only” as both Barry and Iris have repeatedly proclaimed to their romantic partners, Linda and Eddie (Rick Cosnett) and when both couples run into each other at the bowling alley, the natural chemistry between Barry and Iris only heightens suspicions that there is more to their relationship than either has revealed.  So just how much can either Linda or Eddie take before one or both of them call Barry and Iris on their too-close-for-comfort relationship?  Co-star Rick Cosnett shared that Eddie is not going to stand by and not say something during our interview with him on the red carpet at PaleyFest.  Hear what Rick and Grant Gustin had to share about the upcoming entangled relationships of Barry/Linda and Iris/Eddie on THE FLASH:

Fortunately, executive producer Andrew Kreisberg also had a bit to share about Linda Park in his interview from PaleyFest too:

Another wrinkle that develops in this week’s episode is Barry catches a glimpse of another speedster while on his way to a crime scene, one that looks remarkably like himself.  He naturally does a double-take, but cannot even fathom what he just saw.  Was that Barry or was that someone else?  Just what Barry saw and how he saw it will be explained and it sets up next week’s episode beautifully.  Fans are going to love where that storyline goes!

Also keep a close eye on Iris as her boss Mason Bridge (Roger Howarth) gives her an assignment that is certain to put her in harm’s way.  Iris, unfortunately, has not yet learned that digging into a villain’s past just might put her own life in danger.  The inquisitiveness is just what Barry fears, not only as to his own secret identity, but he knows that there are others who are more desperate to protect their secrets and one day that is going to really get Iris in trouble.  Just where Iris’ investigation leads will put one of our beloved heroes in harm’s way and it will go badly.

So with lives on the line and too many people to keep an eye on all at once, Barry Allen is going to have a lot to deal with in “Out of Time.”  Just who might fall because he cannot be in two places at once?  We only shudder to imagine.

With all that goes down in “Out of Time,” be sure to tune in live to catch the all new episode of THE FLASH on Tuesday, March 17th at 8:00 p.m. on the CW.  Bring a pillow to clutch, you are going to need it!

(In case you missed it, here’s where you can see the remainder of the red carpet interviews with THE FLASH cast at PaleyFest)

THE FLASH Teasers: Fun Quotes from the Upcoming Episode “Out Of Time”