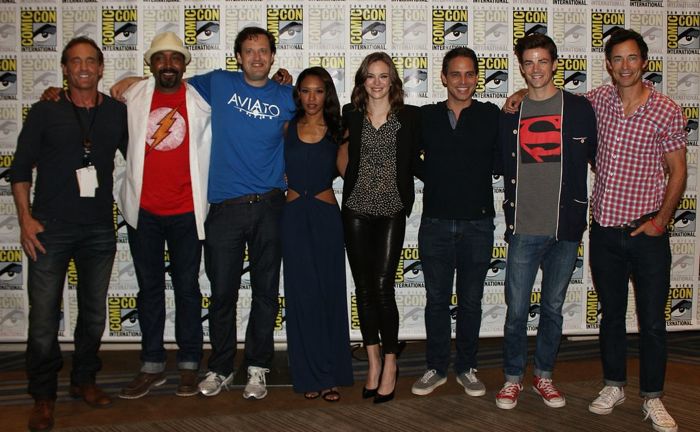 The Flash- From the Arrow creative team of executive producers Greg Berlanti and Andrew Kreisberg and director David Nutter, The Flash is a fast-paced superhero drama that follows the high-speed adventures of the Fastest Man Alive. Written by Berlanti, Kreisberg, and DC Entertainment’s chief creative officer Geoff Johns, the action drama follows Central City police scientist Barry Allen, an everyday guy with the heart of a hero and the genuine desire to help others. Standing still emotionally since the day his mother was murdered (and his father unjustly jailed for the crime), Barry was taken in as a child by the investigating Detective West and raised in a cop’s home alongside West’s super-smart daughter (and Barry’s dream girl), Iris. But when an unexpected and devastating accident at the S.T.A.R. Labs Particle Accelerator facility strikes Barry, he finds himself suddenly charged with the incredible power to move at super speeds. While Barry has always been a hero in his soul, his newfound powers have finally given him the ability to act like one. With a winning personality and a smile on his face, Barry Allen-aka The Flash-is finally moving forward in life…very, very fast! The series stars Grant Gustin (Arrow), Candice Patton (The Game), Rick Cosnett (The Vampire Diaries), Danielle Panabaker (Necessary Roughness), Carolos Valdes (on Broadway: Once), with Tom Cavanagh (Ed), and Jesse L. Martin (Law & Order). From Bonanza Productions Inc. in association with Berlanti Productions and Warner Bros. Television, The Flash premieres this fall on Tuesdays at 8/7c on The CW.