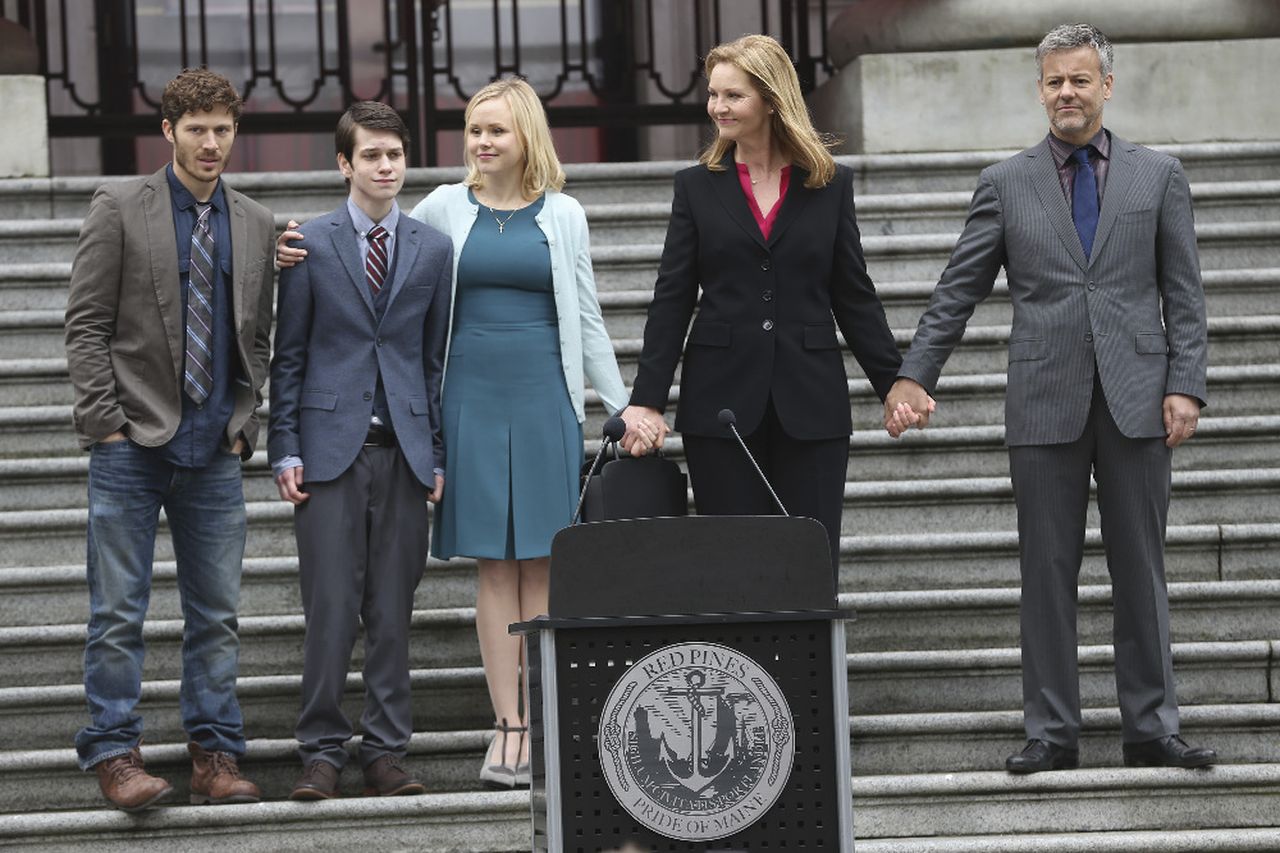 God love the broadcast networks. Some of them are trying to step up their game in the face of rapidly declining ratings. While many of the programs coming down the pipeline on the Big Four are still crime procedurals and tame sitcoms, the things that are killing them, sometimes you get an attempt at a decent complex mystery drama.

The latest stab at quality is ABC’s THE FAMILY, which premiered last night. Told in two time periods, the present and ten years ago, this show is about a family rocked by the abduction of their son, Adam (Maxwell James), whom they assume to be dead, and rocked again when he seemingly shows back up a decade later (now played by Liam James, The Killing). What went wrong with the initial investigation? Or is the new boy not the son they believe him to be?

The unanswered questions are definitely the draw of THE FAMILY, and the reason to keep coming back. A show usually either thrives on story or on character, and this one has chosen the former. Packed with twists and clues, both real and false, to keep the viewer guessing, audiences will want to know what happens, and it does a decent job of hooking you in that manner.

The characters are a bit less compelling, though the actors are all pretty good. Matriarch Claire (Joan Allen (The Killing, Luck) is the mayor, and she actually uses her son returning as a way to help launch her campaign for governor. Father John (Rupter Graves, Sherlock) doesn’t seem much better, on tour with grief books he’s written and sleeping with the detective, Nina (Margot Bingham, Boardwalk Empire), who may or may not have screwed up his son’s case. Older son Danny (Friday Night Lights’ Zach Gilford in the present, Rarmian Newton in flashback) is a drunk, so of course no one believes his suspicions about ‘Adam.’ Daughter Willa (Alison Pill, The Newsroom and Madeleine Arthur, The Tomorrow People) embraces religion, but perhaps not as fully as people think, being calculating like her mother. Creepy neighbor Hank (Andrew McCarthy, Weekend at Bernie’s) is released from jail, but did he do what he was arrested for after all? And even if he didn’t, would he have, given the opportunity?

None of these are people you can get behind or want to support much, despite the terrible situation. It’s soapy, and that’s fine, but in the best soaps there are usually some redeemable qualities for the core cast. Instead, these are all players in a dangerous game, and one gets the impression they deserve whatever happens to them, at least in the later timeline.

That is probably why THE FAMILY doesn’t connect as well as cable entries in the genre do. Broadchurch is excellent because of its mystery, but also because of the fantastic characters, who struggle with real problems and are sympathetic as people. THE FAMILY is closer to Revenge, which limped along on ABC for a few years before cancellation, where you just want to see what happens to jerks, rather than rooting for a protagonist to win the day.

As such, THE FAMILY is good, but not as good as it could be. It is a great example of what is wrong with the Big Four networks, not willing to fully commit to something new, still mired in what has worked for them in the past. ‘Soapy drama for the sake of drama? Yeah, that’s been a hit before, so let’s add it to a currently winning formula from a cable channel to satisfy both our old audience and win new viewers.’ Unfortunately, that doesn’t work, ending up with a product unsatisfying to some from both camps, and not helping the viewer erosion at all.

However, if ABC and its kin would really give something like THE FAMILY a go, building a slower-paced show on the bedrock of strong characters, they might actually have something. They could even do it with these same actors if they wanted to.

THE FAMILY settles into its regular night and time this Sunday at 9/8c.