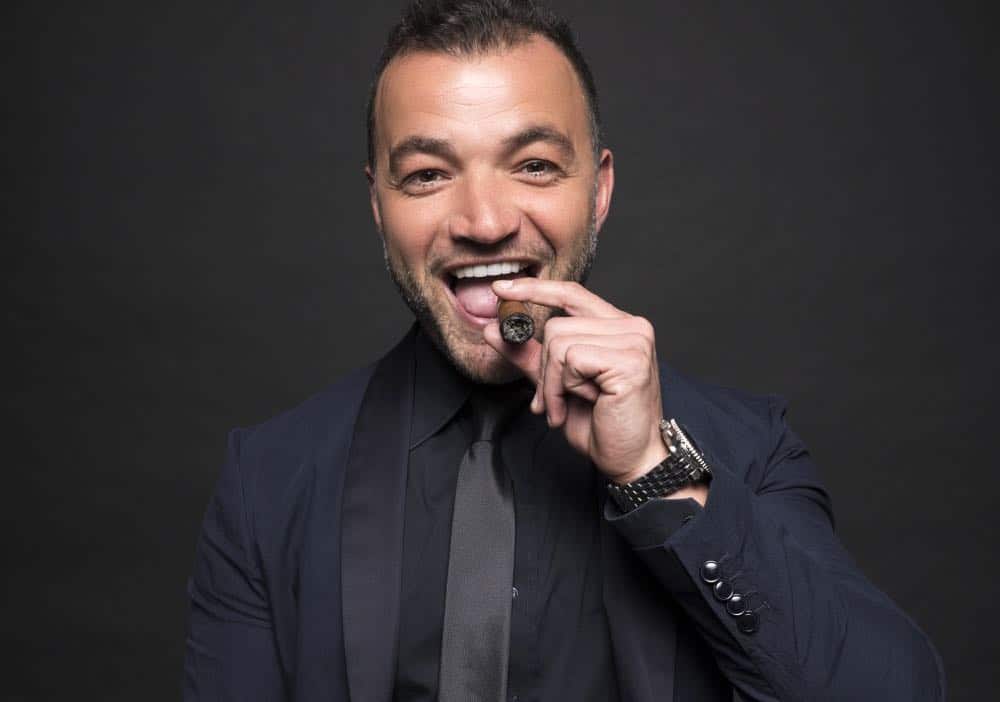 With a career that took off from a role on THE SOPRANOS and moved quickly onto roles in SPARTACUS, PERSON OF INTEREST, LONGMIRE and ARROW, Nick Tarabay has created a spectacular presence on screen in all his roles. The LONGMIRE series also starred Robert Taylor, Katee Sackhoff, Cassidy Freeman & many other stars, Robert played the role of Sheriff Walt Longmire. Interestingly, in a role that has taken viewers by surprise in Syfy’s THE EXPANSE, Nick Tarabay has turned into a bit of a swashbuckling hero in the midst of a densely-layered science fiction thriller. In an exclusive interview, Nick talks about this surprising development in his character for THE EXPANSE and reflects a bit about lessons he has learned as a working actor.

What was the initial appeal for you about portraying Cotyar and working on THE EXPANSE?
NICK: Purely because when I read the script I couldn’t tell what his motives were, or where his loyalty lays or if he was a loyal guy or not. These are very intriguing questions that I ask myself as an actor. I was very curious.

How would you describe who Cotyar is in the series?
NICK: The missing piece to solving a big puzzle.

What do you most admire about him?
NICK: He’s very clear on what he wants and what he stands for no matter what the consequences are.

What has been the most surprising part about portraying Cotyar?
NICK: How far he would go to stand for what he believes in. How brave he is.

Then what has been the most challenging part of portraying Cotyar?
NICK: I’d say not to be distracted by all the fancy futuristic things that are happening around me and instead focus on my relationship to it and more importantly my relationship to Avasarala [Shohreh Aghdashloo]. Because she is my link to this world.

What is it like working alongside the talented ensemble on THE EXPANSE?
NICK: A blessing. It’s every actor’s dream to work with people who will challenge him or her. That only elevates one’s performance and the level and quality of the show all around.

Who do you get to work with most in the series and what is that experience like?
NICK: Shohreh Aghdashloo (Avasarala) and it is pure joy and fun working with her. She not only is an incredible actor but a wonderful human being with a contagious positive energy.

Do you have any favorite scenes that you can share from working on the series so far?
NICK: There are a lot but one in particular in season 3 EP 1 between Avasarala and Cotyar that the fans are going to go crazy for. Unfortunately, I can’t talk about it yet, because the season has not been aired yet, but trust me…. The fans won’t miss it.

How would you describe the Cotyar and Avasarala dynamic through the series?
NICK: Unique, powerful, funny, charismatic and very important.

How does Cotyar view Avasarala?
NICK: A good person in desperate need of honest help.

As an actor, what has been the one thing you have taken away from the experience of working on THE EXPANSE?
NICK: To be kind and patient with other people. Everyone on that set is extremely kind and very professional of course. But I’ve been on sets where we had huge actors and a brilliant script but people were cold and unwelcoming for no reason other than ego. The need to feel validated and that only made for a very uncomfortable space for the actor and crew and I strongly believe that it will hurt the work. I loved being on the set of THE EXPANSE and it reminded me that there is more to being a good actor than preforming well in front of the camera, but behind the camera as well.

What is your proudest achievement working on THE EXPANSE?
NICK: The character was originally slated to do only 8 episodes, but due to the chemistry he had with Avasarala on screen and the reaction the writers and fans have for Cotyar, he’s now on many more episodes. I love it when that happens and I’m very grateful for it. I’m very thankful for the writer and authors and all the production executives who made this decision.

You also worked on the film “Pacific Rim Uprising.” What did you enjoy about working on that project?
NICK: I was a fan of the first movie, so I was very excited to be part of the franchise. Also, working with Steven DeKnight again on yet another hit!

What did you take away from that experience on “Pacific Rim Uprising”?
NICK: I want to do MORE movies. Hahaha.

What has surprised you most about your career so far?
NICK: Honestly… I am both surprised and grateful that I still have one. And for the fact that it keeps growing and advancing. I am a blessed man to be able to do what I love and make a good living doing it.

At this stage of your career, what do you think you have learned from the roles and projects you have worked on?
NICK: That there is way more to us, ALL of us than we give ourselves credit for. I say this because acting taught me to visit more parts of me and explore more of myself depending the role than I ever did. I’m telling you we have it all, we just need to be reminded sometimes to be brave and visit it more often. I am blessed because acting helps me and sometimes forces me to do so.

Then what are the perks of where you are in your career right now?
NICK: Recognition and credit that helps me go for bigger roles. And of course the fans.. I love the fans!

Has there been any great advice you have gotten about working as an actor?
NICK: Many… One of my acting coaches Susan Giosa said to me once, “No matter what you love in life, it CANNOT be everything about your life” — meaning to be successful at anything in life, you have to have a life.

What advice would you offer to other upcoming and aspiring actors?
NICK: Do more theatre!! Work on great plays! I truly believe the heavy lifting is in the theater. To get better, you need to work on better materials and the theatre is full and rich of them. Please work on plays and you’ll realize that you’re a part of something BIG. I fall head over heels in love every time I work on plays and great playwrights. I remember why I wanted to be an actor in the first place. theatre and plays are the heart and soul of an actor and my advice is: “Follow your heart and money will come. Follow money and you’ll lose your heart.”

Do you have any other upcoming projects that you can share that fans should keep an eye out for?
NICK: I’m currently working on a HUGE video game that I am super excited about but unfortunately, I cannot say much about it until it comes out. Which I think will be sometime at the end of this year or early next. And me and a good buddy of mine are about to shoot a teaser for a show I created. You guys are going to love this.

With anticipation of what surprises Season 3 holds in store, you are going to want to tune in for the return of THE EXPANSE on Wednesday, April 11th at 9:00 p.m. on Syfy. To see exclusive clips and behind-the-scenes information on the show, be sure to follow the show on Twitter @ExpanseSyfy. Then to follow Nick’s career as it grows, be sure to follow him on Twitter @NickTarabay for that inside scoop as well.