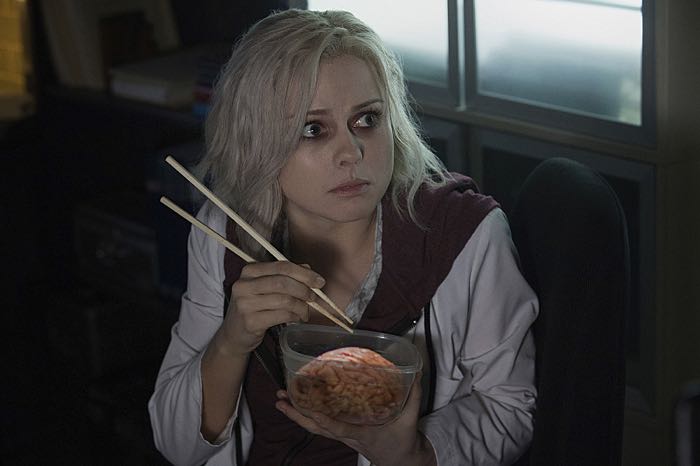 The CW announced its midseason schedule today at the winter gathering of the Television Critics Association in Pasadena, CA, including the series premieres of new dramas iZOMBIE and THE MESSENGERS, the new unscripted competition series CEDRIC’S BARBER BATTLE and a new cycle of WHOSE LINE IS IT ANYWAY?.

From executive producer Rob Thomas (“Veronica Mars”), iZOMBIE makes its series debut on Tuesday, March 17, (9:00-10:00pm ET), following an all-new episode of THE FLASH (8:00-9:00pm ET).   Rose McIver (“Masters of Sex,” “Once Upon a Time”) stars as Olivia “Liv” Moore, a rosy-cheeked, disciplined, over-achieving medical resident who had her life path completely mapped out… until the night she attended a party that unexpectedly turned into a zombie feeding frenzy. As one of the newly undead, Liv has devised a way to resist her baser urges to devour fresh human brains – she’s taken a job in the Seattle coroner’s office.  In this appropriately dead-end job, she can secretly snack on the brains of the many Jane and John Doe corpses that make a final stop in the morgue.  Liv remains resigned to an eternity without hope or purpose, until she realizes that with every brain she consumes, she retains a portion of that person’s memories, and she begins to experience visions from the point of view of the murder victims. It’s not the same as being alive again, but at least she can find purpose in her undead existence by helping to solve the murders of those who are indeed fully dead.

With iZOMBIE on Tuesdays, the Winchester brothers move to their new night as SUPERNATURAL returns to Wednesdays, beginning March 18, 9:00-10:00pm ET, the week after THE 100 concludes its second season on Wednesday, March 11, 9:00-10:00pm ET.

On Friday, April 10, The CW presents the series premiere of its apocalyptic new drama THE MESSENGERS (9:00-10:00pm ET).  When a mysterious object plummets to Earth, the blinding explosion it causes sends out a shock wave that instantly connects five strangers who awaken after the pulse with extraordinary gifts they can barely believe.  Most mysterious of all is a figure known only as The Man, who brings death and suffering wherever he appears.  The wheels of Revelation have begun to turn, and these five newly christened Angels of the Apocalypse may be the only hope for preventing the impending Rapture.

That same night, The CW will debut its new reality competition series CEDRIC’S BARBER BATTLE (8:00-8:30pm ET), hosted by Cedric the Entertainer, followed by a brand new season of the hit improv comedy series WHOSE LINE IS IT ANYWAY? (8:30-9:00pm ET).  The new series CEDRIC’S BARBER BATTLE sets out to capture the culture that exists in barbering communities across the country.  Each week, the show will visit different barbershops in cities, including Los Angeles, Queens, Harlem and Austin, where the best barbers will go head-to-head in a hilariously unfiltered, no-holds-barred arena.  Creating hair sculptures that feature elaborate designs ranging from images of a person’s face to grand cityscapes, the barbers will use nothing more than their clippers and a few coloring tools to create intricate works of art that are both imaginative and location-centric.

Box Office Results For The Weekend Of January 11th 2015