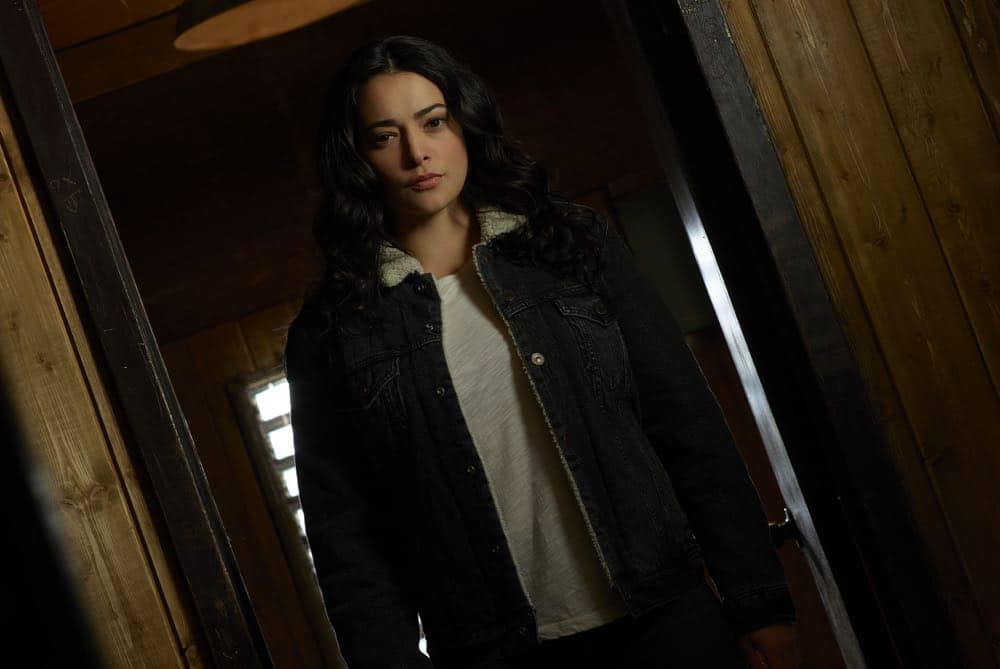 In ABC’s new sci-fi series THE CROSSING, hundreds of people wash up on an empty beach claiming to be from the future and right away the local town sheriff finds himself at odds with the government on how to best quarantine the unexpected visitors and find out why they have traveled across time. While at this past Winter Television Critics Association Tour, Natalie Martinez previewed her cool, new role on THE CROSSING.

What drew you to this role?
NATALIE: Tough jobs are what I love and this job gave me all that. I got a really meaty actor kind of role to play. Reece has a lot of different things going on with her. She is a butt-kicker.

She also has high stakes, because she’s a parent.
NATALIE: That’s what I’m saying. There’s a lot of character-driven stuff, as well as the stunts, so I feel like this show has a little bit for everyone. You have the thought-provoking actor scenes, you have a little bit of the comedy, and of everyday demonstrative stuff. It’s definitely a good role. We did so much wire work. We had such a great stunt crew out there. It’s fun. There are some times I was hanging off 10 to 18 feet off the air, jumping over planes, things like that, which is always a lot of fun.

What’s a scene that you can’t wait for viewers to see?
NATALIE: My favorite thing to shoot? I had really good days. We all got along so great, but that water-work to me was one of my favorites. I can’t wait to actually see that. You slightly see it in the pilot. I just love the water-work. We also have a couple really cool fight scenes. Towards the end, something happens to the lead character, and I can’t wait for people to see that. Just know that it’s going to look really crazy and awesome and I’m going to be going through some shit.

Tell me a little bit more about working in the water, because the photography’s beautiful. But it’s got to be a challenge for you, as an actor, to be underwater and be in physical peril a little bit, and yet make it look so beautiful.
NATALIE: Oh, yeah. I had to hold onto Bailey. So you’re very conscious, because you have this little girl underwater, really underwater. So we had little points where if she squeezed me, she needs to breathe. I needed to pay attention to her, but I also had 18 pounds in my other hand to bring me down, as I’m tied to a wire. So we count, we go down, then I drop the weight, then they pull me with a wire, then I let her go. So you’re really thinking about a lot of things. On top of that, you have to act out your scene. So, it’s definitely challenging, but all the more, I loved it. Bailey was so amazing. She’s such a tough little girl, she really is, and she’s really good.

Do you know some background on your character?
NATALIE: Well, we were kind of soldiers and we were created, and I think we started to believe that we were the chosen ones. We were genetically-modified humans, so we kind of are the evolved of the human race. So with that, we feel like the commons are just … I don’t want to say a waste, because hear that, so I think we’re soldiers that kind of take everybody out. And something happens with mine, when I meet the little girl that’s my daughter, when I ran with her, she just kind of changed everything. And that’s my background. All of a sudden from this soldier, I became someone who became emotionally involved, which was not supposed to be part of my genetic modification and that kind of sets me away from everybody else.

Can you talk briefly about the relationships? Your character kind of teams up with Jude (Steve Zahn) right away.
NATALIE: Yeah. Well, we do and then we go through kind of different things. It’s kind of a tough world. Jude gets these people who kind of come out of nowhere with no answers. So he’s a little distressed. And my character Reece comes from a place where these are people that I had to kind of fight off of. So there’s definitely times where she doesn’t know if she should trust him, and he doesn’t know if he should trust her. There’s definitely some things that happen that make her think otherwise and they kind of separate and get back together. So throughout the whole series, you really see our battle to see whether they can truly trust each other or not.

To discover more about Reece and her incredible journey through time and to learn more about the Chosen Ones, be sure to tune in for the premiere of THE CROSSING on Monday, April 2nd at 10:00 p.m. on ABC.