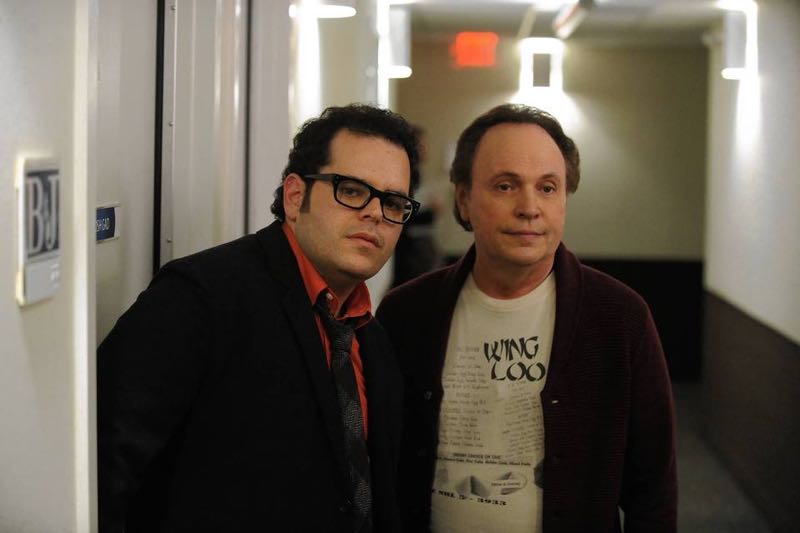 FX’s new series THE COMEDIANS stars comedy veterans Billy Crystal (When Harry Met Sally) and Josh Gad (Book of Mormon) as themselves. Or, rather, they play versions of themselves that are hired to do a sketch show for FX called The Billy and Josh Show. There is not actually a Billy and Josh Show; THE COMEDIANS is a fake documentary about two people who have the same backstory as the actors who play them, but with (presumably) more antagonistic personalities.

My first thought upon watching THE COMEDIANS is that it is not in the slightest bit original. The mockumentary style has certainly been done many times before, from The Office to Modern Family to Christopher Guest films. The person-playing-themselves hook has also been used a lot lately, some examples being James Van Der Beek in Don’t Trust the B- in Apartment 23 and (the gold standard) Larry David in Curb Your Enthusiasm. The format here is most like Showtime’s Episodes, which stars Matt Leblanc as Matt Leblanc, in that Josh and Billy are like the writers of Pucks who are forced to work with the former Friends star against their will. They clash and bicker, and yet they are stuck together by circumstance, to keep careers alive, and because of financial need.

The Comedians is funny, though. In the pilot, we see a couple of their sketches, or aftermaths of the sketches, and they work. The story provides ample opportunity for humor both big and small, with some physicality used sparingly, yet well. I don’t know how much of the sketch show-within-a-show we’ll end up seeing, and honestly, I hope it’s not a lot, but what we do see if terrific.

Josh and Billy themselves are great. Both can make the room uncomfortable very well. Crystal is the more established, and so his actions are more predictable. Josh plays expertly off of him, presenting someone that both represents a generation and who can also be quite his own person. Both have undeniable talent with differing sensibilities, and the others in the cast realize that, but Billy’s long resume gives him the upper hand in most situations, at least for now.

More so than Episodes, though, which has a strong ensemble, The Comedians is going to need to rely on its guest stars. Billy and Josh are great, but they can’t just interact with one another all the time. Their go-between, Kristen (Stephnie Weir, MADtv), is not a likeable, relatable character, and while playing to Weir’s strengths, is just not that essential a part. The other two main cast members, Mitch (Matt Oberg, Hart of Dixie) and Esme (Megan Ferguson, also Hart of Dixie), don’t make much of an impression, though whether that’s because of the actors or because they haven’t been given meaty material yet remains to be seen.

Because of who Billy and Josh are, it will take some very strong players to rise to their level. Luckily, THE COMEDIANS, while failing to stock their home team, has a strong roster of visitors in both recurring and guest capacities. I won’t spoil who all of those are, but two of note are Dana Delany (Desperate Housewives, Body of Proof), who plays Billy’s wife, and Steven Weber (Wings, Helix, Studio 60), as a director hired for The Billy and Josh Show. The former, we only hear, not see, in the pilot, and latter doesn’t show up until the end of the first half hour. Weber’s presence, though, and the part he’s playing are the main reason I’m excited to watch episode two as soon as possible.

I’m cautiously optimistic about THE COMEDIANS. I wish it had taken more chances and gone in a bolder, fresher direction. But what is present is entertaining, and it definitely feels like a show that can grow into something really cool given time. Or not. We’ll see.

THE COMEDIANS premieres Thursday at 10 p.m. ET on FX.