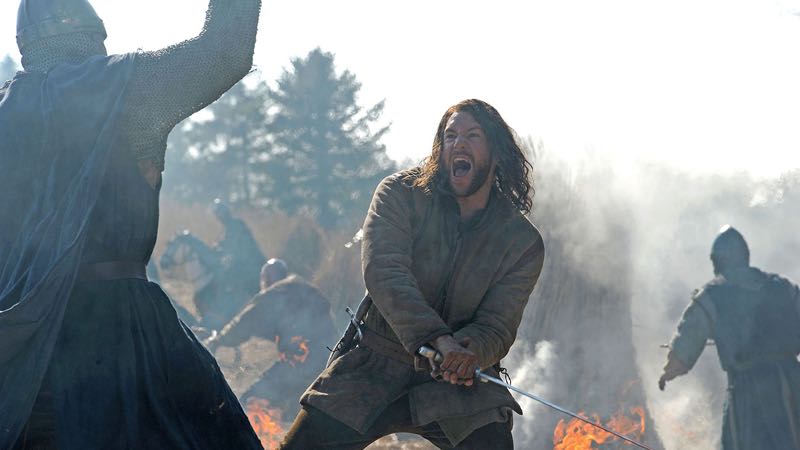 THE BASTARD EXECUTIONER, premiering this week on FX, is the much-anticipated project from Kurt Sutter, whose Sons of Anarchy recently completed its celebrated run. This isn’t just another drama about bikers, though; THE BASTARD EXECUTIONER is a historical (fictional) drama set in 1400s Northern Wales, under the rule of King Edward II. If that description of a medieval period piece turns off those who enjoyed Sutter’s previous work, keep in mind the new show’s title, as it is every bit as brutal and violent as the former.

The titular Bastard Executioner is Wilkin Brattle (Lee Jones, Slut: The Musical). A soldier under Edward I, Wilkin has retired from the service and tries to live a nonviolent existence with a wife, starting a family and becoming a farmer. He wants to put his awful past behind him. But within the two-hour pilot, Wilkin is thrust into events beyond his control, as many great heroes are, and will find himself forced to wield a weapon once more, if he wants to go on living. His is the central struggle of the series, and he is an interesting, if familiar, character.

The entire story is complex and many-faceted. We have the characters in Wilkin’s village, including his wife, Petra (Elen Rhys, World War Z), his best friend, Toran Princhard (Sam Spruell, The Last Ship), and animal-loving (grown) orphan, Ash y Goedwig (Darren Evans, Galavant). We also have those of more noble birth, such as Baron Erik Ventris (Brian F. O’Byrne, Aquarius), his wife, Lady Love (Flora Spencer-Longhurst, Leonardo), and their chamberlain / adviser Milus Corbett (Stephen Moyer, True Blood). There are those that serve the wealthy, like Isabel Kiffin (Sarah White) and Luca Maddox (Ethan Griffiths), those who run in their circles, like Father Ruskin (Timothy V. Murphy, True Detective), and those who head up other factions, like Gruffudd y Blaidd (Matthew Rhys, The Americans.) Plus, society has a fringe in the form of witchy woman Annora of the Alders (Katey Sagal, Futurama, Sons of Anarchy, and Sutter’s real-life wife) and her protector, The Dark Mute (Sutter himself). So, as you can see, even if multiple of those mentioned don’t make it past the first two hours, there is really a lot going on. And this is not the full cast list by any means.

That actually makes it a bit hard to get into. I spent most of the pilot just trying to keep everyone straight and figure out what was going on. However, while dense, the script does lend itself to helping one along. The two-hour running time of the initial installment is welcome, providing plenty of opportunity to get to know people right away, and even the more minor characters have clear motivations, so they seem like a valuable part of the world, making you want to learn more about them. It took effort, but by the end of the initial offering, I was invested in the tale.

The setting is impressive. A village was built in Wales, and the production uses a mostly British cast for authenticity. This means you don’t have to worry about which part of California they tried to convert into a British locale. While it’s hard to nail all the details of such a long-ago time, and Sutter admits that’s why he didn’t even attempt to shape speech patterns, it does feel like a consistent, fully-realized world.

I will warn you, this is definitely not for children. I mentioned brutal violence in the first paragraph, and I probably undersold it. There are multiple disturbing, gruesome scenes that go further than anything I’ve ever seen on a basic cable series. There is nudity, too, and not just a butt, as FX is occasionally known to do, though it doesn’t occur nearly as often as on an HBO show. So please, watch this after your kids go to bed.

The one thing THE BASTARD EXECUTIONER is missing is a solid hook. Wilkin is interesting enough, and there are not any obvious weak points in the cast. But neither are there a lot of stand-out characters, save perhaps Annora and The Dark Mute. Game of Thrones, for instance, has personalities like Jon Snow, Tyrion Lannister, Jaime Lannister, Cersei Lannister, Brienne of Tarth, Daenerys Targaryen, and many more that suck one in and motivate viewers to come back. Wilkin and Milus are intriguing, but they don’t have the same level of magnetism, and because of that, I’m not really excited about the show. This can develop in time, though, and overall, it is well made, so I’ll give it a chance.