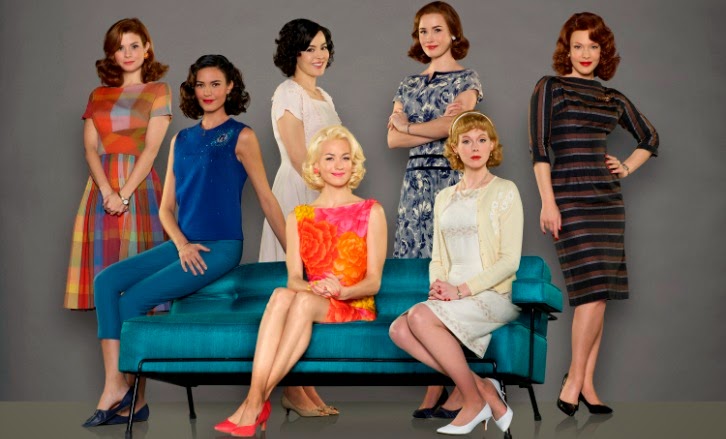 The “Launch” of ABC’s THE ASTRONAUT WIVES CLUB is just around the corner. Based on the novel by Lily Koppel, which is subtitled A True Story, the series follows the wives of the Mercury Seven, America’s first astronauts. Set at the beginning of the 1960s, this program focuses on the women behind the now-famous men who ventured above our planet and out into the unknown.

The Mercury program is well-known, but how much people know about the individuals involved may vary. Being from Ohio, I definitely know who John Glenn (Sam Reid, Hatfields & McCoys) is, and I’m also vaguely familiar with Alan Shepard (Desmond Harrington, Dexter) and Gus Grissom (Joel Johnstone, Getting On). But how many know the names Deke Slayton (Kenneth Mitchell, Ghost Whisperer), Scott Carpenter (Wilson Bethel, Hart of Dixie), Gordon Cooper (Bret Harrison, Reaper), and Wally Schirra (Aaron McCusker, Shameless)? (Unless you’re Matt Myra, of course.)

THE ASTRONAUT WIVES CLUB isn’t really about the men, anyway, though, so while they do appear, they aren’t the focus. Instead of telling us a history story, it strives to show us the personal side, zeroing in on the wives who stayed home. They are as eclectic a bunch as their husbands, if not more so, but they are going through a shared experience no one else could possibly quite understand. And so, despite the varied personalities who wouldn’t necessarily be drawn to one another without this major influence, these woman come together to be profiled by Life magazine and to support one another.

The group is interesting, though it’s hard to get to know them all in a single hour. There’s flashy Rene Carpenter (Yvonna Strahovski, Chuck), who doesn’t pay much attention to the rules set out for the group. Trudy Cooper (Odette Annable, House M.D.) is hiding a divorce put on hold for the sake of her husband’s career, and is a pilot in her own right. Louise Shepard (Dominique McElligott, Hell On Wheels) doesn’t want her past to come out, likely part of the reason she resists the forced bonding. Annie Glenn (Azure Parsons, Salem) seeks to keep her severe stutter out of the public eye. Betty Grissom (JoAnna Garcia Swisher, Better With You) is loving the new attention. Marge Slayton (Erin Cummings, Detroit 1-8-7) and Jo Schirra (Zoe Boyle, Downton Abbey) seem less well defined in the pilot, “Launch,” but there’s plenty of time to get to know them later.

It’s very hard to do period pieces, and THE ASTRONAUT WIVES CLUB struggles much of the time. When showing momentous events, it excels at capturing the gravity and the emotion, and makes one feel what the characters feel. But it’s very easy to take for granted the costumes and settings, which appear decent enough, and because of the way the roles are played, it doesn’t feel all that different from today, other than some surface, superficial, stereotypical things.

While this could be a good thing, helping an audience relate to what they’re watching, that’s not how it comes across here. THE ASTRONAUT WIVES CLUB feels much more like Mistresses, or a lesser Desperate Housewives, than anything that would come from this era. There is much bickering and drama, conflict appearing to pop up just for the sake of conflict, rather than to advance the story. Maybe this is how things were between these gals, competing to sell their family as the best, and thus earn their husband a top spot; I couldn’t say for sure. But it feels purposely bent towards modern sensibilities, to its detriment.

Perhaps that’s why ABC is burning it off during the summer. While cable keeps chugging along with solid offerings year ‘round, the broadcast networks tend to use the warmest months to get rid of their junk they don’t think anyone wants to watch. Despite a few good qualities, I do feel like THE ASTRONAUT WIVES CLUB just isn’t good enough for the regular season, and so belongs where it is.