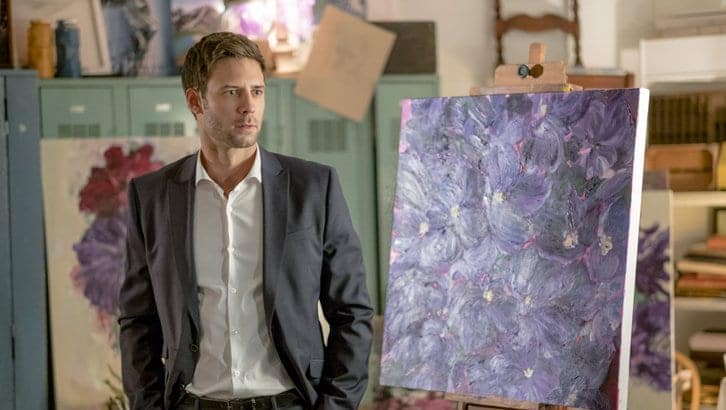 There is one thing Hallmark movies do best and that is it offers charming romantic movies featuring actors who reflect the best of what we would like to see more in the world:  people who are seeking love, as well as career satisfaction in their lives.  Hallmark also knows just how to showcase actors who are adept at conveying the wholesome goodness that makes believing that both those life goals achievable.  In its new film “The Art Of Us,” Hallmark brings together the wonderful talents of co-stars Steven Lund and Taylor Cole. Steven simply radiates a heart-warming spirit that infectiously invites viewers to watch his work and share in his joy in each of the characters he portrays.  In an exclusive interview, Steven talks about the fun he had working on “The Art Of Us,” as well as reflecting on a few of his recent television roles that have endeared him to fans everywhere.

What initially appealed to you about the role of Tom Stone and working on Hallmark’s “The Art Of Us”?
STEVEN:  The prospect of learning how to paint was certainly an immediate ‘draw’ for me. I haven’t painted anything since I was about 11, and I wanted to give my mom something to put on her fridge.

How would you describe who Tom is?
STEVEN:  Tom is a modest fellow with the desire to lead a much more simple life than the one he’s lived to this point. Being a soldier is a burden he carries, but he’s done his service and just wants to fill his life with the quieter things that make him happy.

What is it like working alongside Taylor Cole?
STEVEN:  Working with Taylor Cole was like having a loyal friend on set at all times, who laughs at all your jokes and antics and always makes you feel supported. She made that set a wonderful place to be.  Taylor is definitely one of the most genuinely kind people I’ve ever met, which kinda makes the rest of us look bad. She’s a total blast. She lights up every room she walks into and is very committed to doing her job well.

What has been the one thing you as an actor haven taken away from working on “The Art Of Us”?
STEVEN:  One thing I may have taken for granted before working on this project, is how much patience and skill is involved in working with animals. I now have a profound respect for animal trainers and the crew who make those difficult shots happen, after bearing witness to the devotion our team showed in making this picture possible.   I loved working with all the dogs, but it’s a humbling process. A well-trained dog is a director’s best friend.

What do you hope viewers take away from watching “The Art Of Us”?
STEVEN:  LYING IS VERY UNCOOL.

You also appeared in Syfy’s HAVEN as the Colorado Kid.  Remembering your time on HAVEN, what did you enjoy the most about appearing on the show?
STEVEN:  Of all the gifts I’ve received from being cast in HAVEN, the one I’m most fond of was the ability to work in my home province of Nova Scotia. Especially being invited back several times, even after sleeping through my alarm and showing up 2 hours late to my first day!

You have more recently been working on the final season of CW’s REIGN as Luc, Narcisse’s son. What can you tease about the developing relationship between Luc and Claude?
STEVEN:  I feel like Luc Narcisse could grab a quill, and ink a 16th century work of literature that would change the course of male dating history, called “She’s Just Not That Into You”.

There is clearly a lot of chemistry between you and Rose Williams.   What do you think contributes to the sizzle in the Luc-Claude scenes?
STEVEN:  Rose Williams is truly one of the most fierce and brave performers I’ve ever worked with. She has a very infectious passion and her willingness to play made it easy to delve deep into the scenes. Really, she gets all the credit.

Then having done two prior Hallmark films: “Christmas Incorporated” and “The Best Christmas Party Ever,” what initially made you want to join the Hallmark family?
STEVEN:  They’re fun projects. The material helps to foster an environment where everyone can really enjoy themselves on set, and it lends itself to the final product. For someone like me who needs set to be a warm and smiley place, it allows me a venue to be myself.

What do you think you have learned from working on those films?
STEVEN:  When you have 12 days to make a movie and you have to learn 10+ pages a day, as an actor, it sharpens you. You have to show up ready to hit your mark and say your lines and you rarely get many chances to nail it.

What has surprised you most about your career so far?
STEVEN:  The fact that people still want to hire me, occasionally.

At this stage of your career, what do you think you have learned from the amazing variety of roles and projects you have worked on?
STEVEN:  People often ask me what my ‘dream role’ is or what sort of genre I would ideally like to work in, and after having the opportunities I’ve been given so far in my career, I have to say that I want to do it all. I don’t think I speak just for myself when I say that I’d like to continue to do as diverse work as possible, as often as possible. I doubt I’d be able to identify that, if it weren’t for the chances taken on me, and the spectrum of work I’ve been lucky to do thus far.

Then what are the perks of where you are in your career right now?
STEVEN:  At this point in my career, I’ve started to notice that certain casting directors have been able to think of me when casting a particular role they think I would suit. Although I still consider myself a novice, it’s nice to have that recognition.
I also love being called upon to collaborate with friends on different projects. I’ve noticed I’ve gotten more of those types of phone calls lately which is a nice perk of the job!

If there were one role you would like to revisit, which would it be and why?
STEVEN:  I had a one-liner role on SUITS as “Attractive Guy” which I was told had the potential to recur. However, I guess I didn’t leave a lasting impression, because I never got a second date 🙁

You seem to take on roles that are very challenging. Do any of your characters and the situations they find themselves in ever leave a lasting impression on you?
STEVEN:  Working on a family driven show like BITTEN taught me a lot about the importance of having a cohesive unit when you’re making something with so many unique challenges. I always played on teams in sports growing up, but this an entirely different beast. Having the love and support of those you’re working with is the only way to successfully accomplish such a difficult task. It was easy for me to develop a real bond with my co-stars and crew on that show but moving forward, I don’t ever want to contemplate the challenges if that mutual respect isn’t there from the top, down.

Has there been any great advice you have gotten?  What advice would you offer to other upcoming and aspiring actors?
STEVEN:  As an actor, you must fill your life with the fullest and richest experiences you can. Without that, you’ll have nothing to call upon.

Do you have any other upcoming projects that you can share that fans should keep an eye out for?
STEVEN:  Catch me in REIGN on The CW, and Season 2 of PRIVATE EYES!

To see Steven’s delightful performance in “The Art Of Us,” be sure to tune in for the premiere on Saturday, May 20th at 9:00 p.m. on Hallmark Channel.  He also currently co-stars on the CW drama REIGN, which airs Friday nights at 9:00 p.m. and you can look forward to seeing him on Season 2 of the Canadian drama series PRIVATE EYES.

To read more about “The Art Of Us,” you can read our exclusive interview with co-star Taylor Cole:

THE ART OF US Scoop: Shining The Spotlight On Taylor Cole
Link:
https://seat42f.com/the-art-of-us-scoop-shining-the-spotlight-on-taylor-cole.html