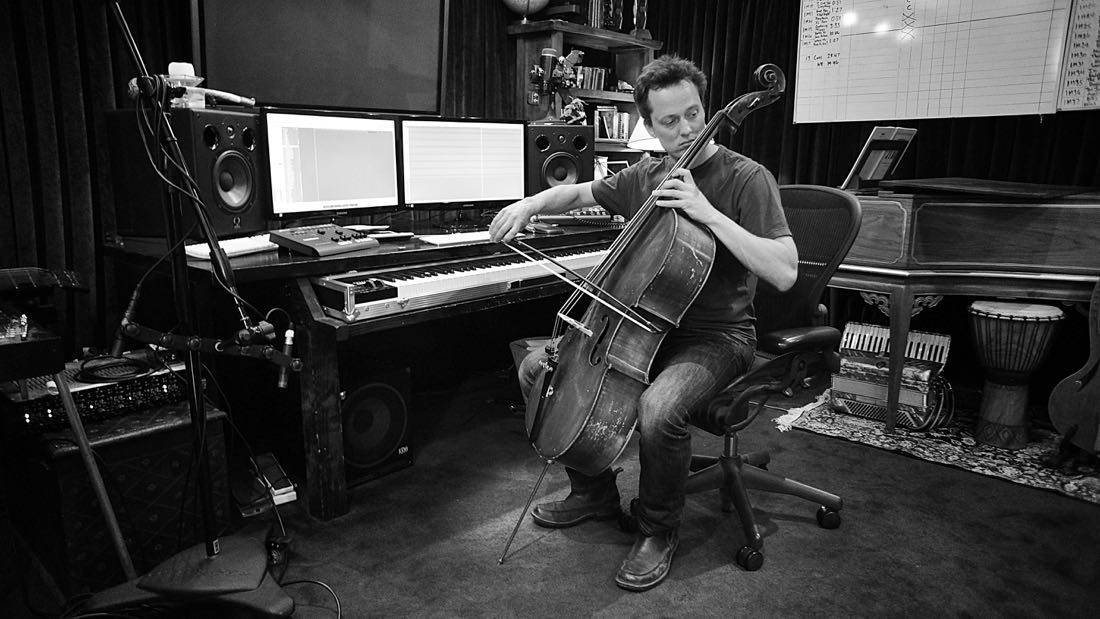 For a show like FX’s drama THE AMERICANS, the sounds and music woven into each scene must convey more than any words written in the episode as the characters frequently communicate with a single look or with unspoken agreement.  Thus, those wordless scenes rely upon a gifted and skilled composer to craft a sound that still evokes and supplements the underlying emotion.  Composer Nathan Barr excels in this craftsmanship and deserves credit for seamlessly tying such emotionally charged scenes together and the result is a superb listening experience while the viewing audience watches mesmerized in every episode of THE AMERICANS.  In an exclusive interview, Nathan shares what it is like composing for THE AMERICANS, as well as his other current television shows THE SON and SNEAKY PETE.

You have had a remarkable career composing for television. How did you get connected to or approached in composing for THE AMERICANS? What was the initial appeal of the project?
NATHAN:  I had worked with show runner Joel Fields on a project years earlier and we had kept in touch and wanted to find something to work on together again. When it came time to interview composers for the show, I was on the list and was asked to write a demo. I wrote a 7 minute suite and based on the strength of that landed the gig. The initial appeal of the show was the extraordinary pilot which to this day remains one of the better pieces of story telling I have seen on television.

Are there any specific challenges composing THE AMERICANS and, if so, like what?
NATHAN:  Every show has a unique set of challenges. I’d say one of these challenges exists when a show runs for more than a couple seasons like TRUE BLOOD or THE AMERICANS. Just as the story continues to evolve, so the score needs to do the same. Relying on themes established in the first couple episodes can become tedious if overused, and so creating new material that evolves with the story and yet remains in the world established in the pilot becomes a challenge, though a welcome one.

For you, what are the rewards for you composing for THE AMERICANS?
NATHAN:  Any show I get to work on where I am a genuine fan of the show is a major reward. To this end, I never read scripts or watch early cuts if I can avoid that. I often watch the show for the first time when we spot and therefore get to experience it as a fan first, then react as the composer. Additionally, all the folks involved with THE AMERICANS are first class people and professionals, so we are all doing our best work together, and I think the results show that.

Is there a scene or sequence that you composed for in Season 5 that are most proud of that you can talk about and reveal why it resonated with you?
NATHAN:  There is a scene where Gabriel sits down with Philip’s son Mischa and tells him it’s not going to be possible for him to see his father. I used an unusual cello of my creation called a Sympathetic Drone Cello and really plugged into the emotion in that scene in a way that creators/ show runners Joel and Joe loved.

What instrument(s) did you find were key in this particular to set the tone or musical theme you were striving to achieve for THE AMERICANS?
NATHAN:  Joel Weisberg, Joel Fields and I discussed avoiding overtly Russian instruments when we began Season 1 as we felt this would be too on- the-nose for a show that is all about nuance and the emotional core of the characters. To have moved in the direction of the Red Army Choir or using a Balalaika felt too obvious and so I worked at finding sounds that played more to emotion than to place. This was the goal of the tone from the beginning.

Were you given freedom to choose the sound for the project or were you under specific parameters to work within?
NATHAN:  The 7 minute demo I wrote to land the show really set out what my approach was to be, and when I go back and listen to that now the seeds to what the score has become are all right there.

How fast do you work when given a project of this scale? Are you allowed considerable time or is it kind of a rushed thing? Did it take days or weeks to compose for?
NATHAN:  Generally speaking, with most shows, there is more time early in the season per episode than at the end of the season. I still have to work quite fast given there are a couple of folks who need to listen to and approve my work. I would say I generally complete an episode in 2-3 days and then this give folks a couple days to respond and me an additional day to address any changes that are asked for.

When looking for a project, what is something you look for? Do you take everything that comes along can you pick and choose?
NATHAN:  I am definitely selective with how many shows I take on at one time and the quality of those shows. Ideally I pick shows that I would be a fan of watching even were I not involved.

What is an essential element of being a music composer for film and television that makes the job easier for you?
NATHAN:  Remembering that the story comes first and that the music always serves the story, not the other way around. The minute a composer starts thinking only about the music they can get into trouble.

What tools and equipment do you rely on to get the sound you want?
NATHAN:  Having a large collection of instruments to play keeps this fresh and unique to me. I am constantly building on my collection, or even inventing instruments, all with the goal of creating a sound that is all my own. 70%-80% of any cue I write on THE AMERICANS is me performing on an instrument through a microphone.

What are some of your favorite instruments to use? What makes each so appealing?
NATHAN:  Cello is obviously an instrument I lean on heavily in most of my scores. It’s an incredibly versatile instrument with a huge amount of soul and so it’s capable of playing many roles in a film or TV score. I also use a bowed guitar quite a bit.

What in your background inspired to pursue a career in film/television composing? Was it a conscious decision or did you kind of fall into it?
NATHAN:  I grew up loving film and TV music and so the idea of pursuing it as a career was always in the back of my mind. When I arrived to L.A. in 1996, I jumped into the business side of film and it was ultimately this first job, totally unrelated to music, that led to me submitting my resume to Hans Zimmer and landing that assistant job with him. So while I did fall into the job for Hans, it was certainly something I had thought about pursuing.

What kind of advice can you offer to others seeking to pursue a career in film and television composing?
NATHAN:  The quickest and most practical way to a career is by working with an already established composer. You not only get to see how a working composer deals with career and life, but also will probably be given the chance to do some additional writing which can ultimately lead to your own film or show.

What has been your favorite part about working THE AMERICANS Season 5?
NATHAN:  Seeing the show continue to hook it’s audience with compelling storylines and a total commitment by the creative team to keep pushing the show to new places. Some shows lose the thread or energy introduced in the pilot, and THE AMERICANS is certainly a big exception to that.

Do you have any favorite scenes from the episodes that have aired so far?
NATHAN:  I actually love the sequence in the first episode of Season 5 where they spend quite a bit of time just digging a hole. It kept my full attention and is a testament to how intriguing these characters are, even when doing something as mundane as digging a hole!

At this point, what has been one thing you haven taken away from working on THE AMERICANS?
NATHAN:  Joel and Joe have really pushed for the score to be “simple simple simple” and so I have gotten really good at discovering the minimum amount of elements to deliver the greatest impact.

You are also composing for AMC’s THE SON and Amazon’s SNEAKY PETE.  How have you balanced working on all three shows?
NATHAN:  My work on THE SON happened before Season 5 of THE AMERICANS began, and so there was no balancing required between those two shows. SNEAKY PETE was a show I co-scored with my former assistant Stephen Lukach and so the composing duties were split in two making it easier to balance during my work on THE SON which was concurrent.

At this stage of your career, what do you think you have learned as a whole from the amazing variety of projects you have worked on?
NATHAN:  I have learned how lucky I am to be making a living as a composer. My two great loves are music and film/TV and so to have a career that allows me to indulge in both is just incredible. I have also learned that I can always push myself to be better, and in the process find music coming our of my head and heart that I didn’t even know were there.

Are there any cool perks of where you are in your career right now?
NATHAN:  Being able to turn work down for various reasons feels really good. It allows me to focus most on projects that deeply resonate with me.

Has there been any great advice you have gotten?
NATHAN:  I had two well-established film composers tell me early on in my career to make my way on my own if possible as it would ultimately lead to greater freedom and fulfillment. I have done that and can agree completely.

What do you consider to be one of your proudest accomplishments as a composer?
NATHAN:  I feel like I have found a musical voice that is unique to me. Many composers sound alike and have giant careers. But at the end of the day, if I write something that sounds like everything else, it just makes me feel like I’ve missed the point.

Do you have any other upcoming projects that you can share that fans should keep an eye out for?
NATHAN:  I just completed a movie at MGM called “The Domestics,” which comes out later this year. It’s a post-apocalyptic thriller starring Kate Bosworth. I am next jumping into a film directed by Stephen Moyer called “The Parting Glass.”

To hear more of Nathan’s incredible work, be sure to tune in for all new episodes of THE AMERICANS on Tuesday nights at 10:99 p.m. on FX and all new episodes of THE SON on Saturday nights at 9:00 p.m. on AMC.  SNEAKY PETE Season 1 is also currently available for binge-watching on Amazon.com.  To find out more bout Nathan’s current projects you can also follow him on Twitter at: @composerbarr