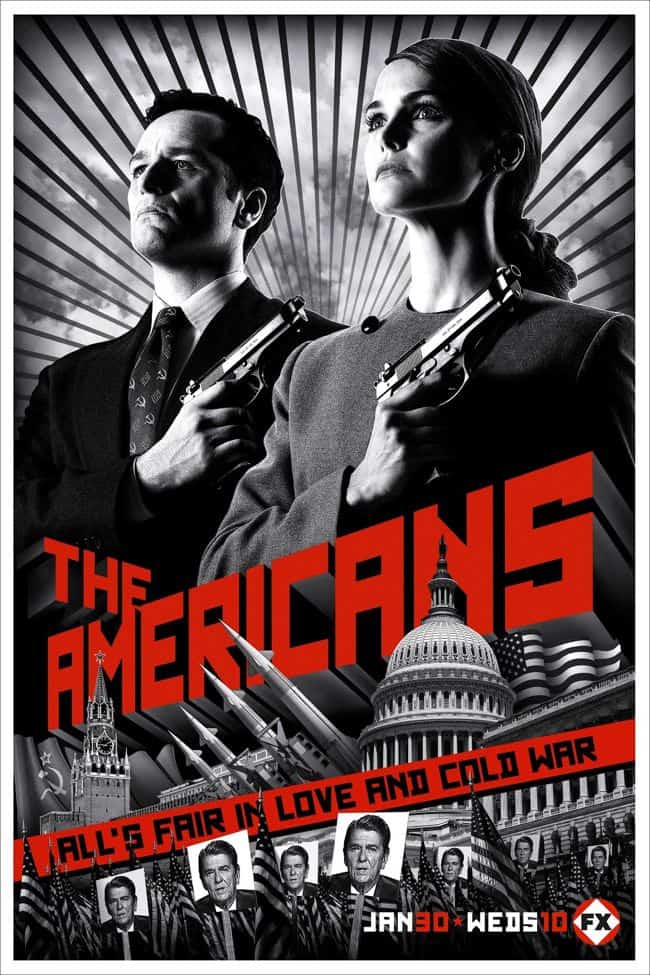 This week’s installment of FX’s THE AMERICANS is entitled “In Control.” No one knows exactly who is in control when President Reagan is shot. The CIA scramble to find out if the Russians are behind it. So, in fact, do the Russian agents, who are also on the lookout for a U.S. government coup.

The assassination attempt on Ronald Reagan is the first major historical event that intersects with THE AMERICANS, but it is a vitally important one. Set during the Cold War, “In Control” reminds us just how tense things are in that time period, and how close we are to war. If Reagan’s shooter had been a Soviet, instead of some guy trying to impress Hollywood actress Jodi Foster, World War III could have begun at that moment. If the Russians had struck first, assuming the U.S. would attack them, as they could have if the Jennings had reported the garbled conversation they overheard, the same could have happened.

After watching “In Control,” it makes me think it’s a wonder that nothing like this did happen. Too many people who are too paranoid in positions of power. Rumors can spin out of control and provoke nuclear war. How did we survive such a thing?

Elizabeth (Keri Russell) would have been the spark of just such an incident. She wants to hand over the choppy recording, in keeping with their orders. Phillip (Matthew Rhys), who seems to understand American culture better, objects. He wins the argument, and thus prevents an incident. This means as much as she loves her country, she may have come to care about Phillip just a little more, which may affect her allegiance as the show goes on.

It’s interesting to see Elizabeth trust Phillip’s judgment, especially when she so clearly doesn’t agree with it. Weeks ago, she comes close to turning him in for possible treason, until an act of love on his part stops her short. Even though the real romance between these covert spies is just beginning, Elizabeth is clearly invested in their marriage already.

It’s not too often on television that we see a relationship like this. Elizabeth and Phillip have been living together undercover for a long time, and are just now falling for one another. It’s unconventional in every sense of the word, but incredibly sweet, after all this time. They are familiar, and also slightly strangers. They know a lot about one another, but there are also a lot of secrets.

There is a period during “In Control” where the bond they are just beginning to build could easily fall apart. For most couples in the early stages of dating, they would be over before they even begin. Yet, Elizabeth decides to listen to Phillip, and Phillip doesn’t hold it against her that she voices her concern. This belies a deeper trust that they have in each other, which could mean that their feelings aren’t as fresh as we, the viewers, are told they are, or even as the characters themselves might believe. Perhaps they have been in love for awhile, and are only now able to admit it to themselves.

I do worry that Phillip and Elizabeth are going to get caught, though. They are taking bigger chances lately, follow orders from their new handler, Claudia (Margo Martindale, Justified). She is pushing them to act swiftly, which isn’t as safe as their previous assignments have been. This week, she has them ready a cache of weapons for guerilla warfare. I hope she doesn’t expose them with her instructions.

Plus, it may not be a good idea for them to spend so much effort bonding with their CIA neighbor, Stan (Noah Emmerich). Their questions about the shooter can be seen as concerned citizens talking to a friend, but Stan could also take them for what they are, intelligence gathering. Stan is already a bit suspicious. Perhaps it would be better to be a little less chummy.

Of course, in any great drama, each side will suffer setbacks. Stan’s is brewing on the home front as his wife, Sandra (Susan Misner), complains they aren’t spending enough time together. Whether Stan divides his attentions to give her what she wants, or whether he ignores her, causing his marriage to fall apart, either scenario could hurt him personally and, by extension, professionally. This might provide a break for the Jennings at a key moment down the line.

It’s hard to root against Stan, but at the same time, Elizabeth and Phillip are highly sympathetic characters. They may be double agents working for the enemy, but they are also parents who care about their family. People are people, and whose flag they salute depends a lot on where they are born; not everything, if anything, they do is evil. This makes the series an intelligent, complex picture of a number of individuals, rather than the old fashioned good vs. evil dynamic.

Four episodes in, I still think the pacing may be a tad slow for my taste, but I am quickly becoming enamored of the series. THE AMERICANS has a fantastic cast who excel at what they are doing, and the writing is smarter than what I first perceived. I am definitely going to keep watching, as I don’t see any clear path laid out for how the story will proceed, which is exciting.

THE AMERICANS airs Wednesdays at 10 p.m. ET on FX.