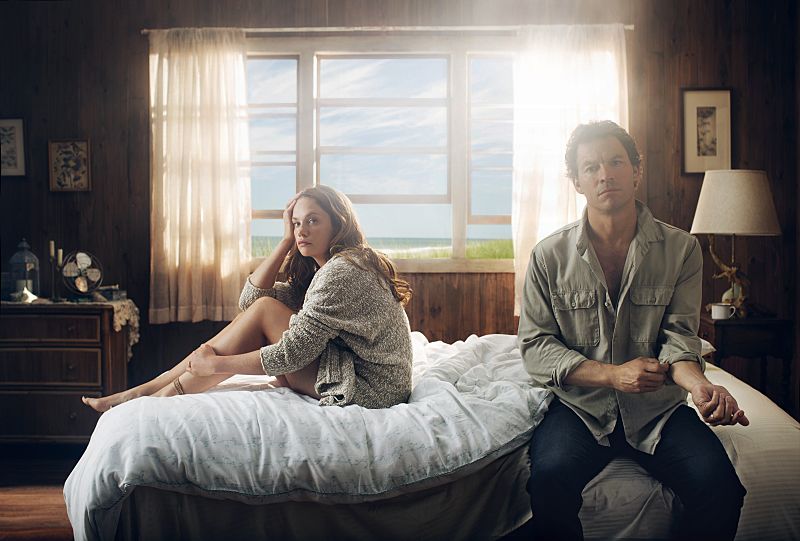 Showtime’s THE AFFAIR is an interesting slow-burn drama. As the title implies it features an affair between a man, Noah Solloway (Dominic West, The Hour), and a woman, Alison Bailey (Ruth Wilson, Luther). But what happens is far from cut-and-dry. Somehow, these two people, who both have spouses, end up involved with one another. But how that comes about and what the aftereffects of this are is up for debate.

See, THE AFFAIR doesn’t just tell a story. Alison and Noah are talking to someone (law enforcement?) and telling the events to the best of their recollection, sort of like HBO’s True Detective, but less coherent. That is because Alison and Noah remember things quite differently. It’s not clear exactly how much time has passed between the two timeframes, their hair has not turned grey or anything, but it’s definitely been awhile. And something really traumatic must have occurred, maybe the emotional toll the affair takes, but maybe something else, that has caused them to crystalize their recollections into at-times extremes.

The reason I mention it could be something else is because of the themes of death in the pilot. There are multiple scenes in which a child dies or almost dies. I won’t spoil the details, but tragedy is constantly hanging over the program. There are some very dark themes and a creepy mood in certain scenes. This implies, to me anyway, that there could be something truly depressing just around the corner, more so than what leads the characters astray in the first place.

Half of the first episode of THE AFFAIR is told from Noah’s perspective, and then the series flips and retells the tale from Alison’s. Obviously, they being different people, a lot of what is shown doesn’t involve the other. But when their narratives do overlap, the similarities are overrun by the inconsistencies. Was Alison trying to seduce Noah? Was Noah stalking Alison? Who can tell?

Even more than that, though, are the details. In Alison’s telling, Noah’s wife, Helen (Maura Tierney, ER), casts a loving gaze at him that isn’t there when Noah relates the same thing, which says something about how Alison sees Noah. Similarly, we don’t see Noah being attentive to Helen in Alison’s version, but he’s a near-perfect husband in a good marriage when he relates things, the way he sees himself.

We meet both spouses in the first hour. Helen is a busy mom of four. She and Noah find it hard to make time for sex, their kids constantly interrupting. But they do seem to love one another, and she looks to be a good person in both sides. Alison’s union with Cole (Joshua Jackson, Fringe) is more rocky. They’ve gone through something, revealed semi-late in the hour, and they are finding different ways to cope with it, driving them apart. Neither Alison nor Noah paints Cole in the best light.

I like that this series doesn’t give us the truth. In order to understand what actually happens, viewers must watch both versions, then think for themselves. Since everyone is flawed and everyone will bend their memories to what best suits them, it’s extremely likely that neither is getting it right, so you must try to make your own conclusions about what the middle ground is, just as the people listening to our protagonists are doing.

Despite the British leads, known for their work overseas, the show is American. There’s a way the production unfolds that just seems more like the fare we’re used to over here, style and tone and pacing matching other premium network fare. The quality of the action and the production is top notch, and it would probably pair nicely with Masters of Sex, another forbidden love tale with lots of pathos, which actually just concluded their sophomore run. Maybe next year, that can happen.

THE AFFAIR is a must-see offering, with the scope of a film and the intensity to such one in almost instantly. It airs Sundays at 10 p.m. ET on Showtime.