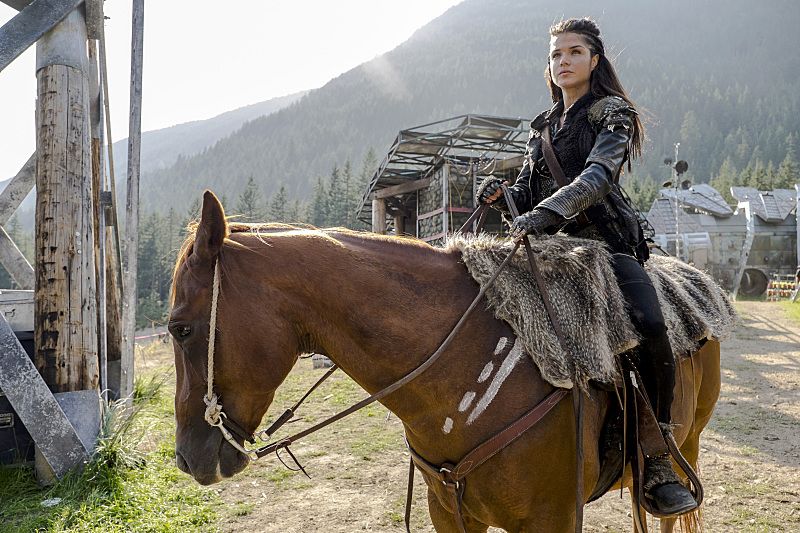 Returning to Earth has not been easy for THE HUNDRED.  First, they were attacked by Grounders, then captured and tortured by the Mountain Men, and now reunited with the rest of their people, now known as the Sky People, from the Ark, the original hundred have been whittled down to less than 40 survivors.  Surprisingly, the first person to set foot back on Earth after 97 years in space from the Ark was Octavia (Maria Avgeropoulos) — the girl that should never have been born.  Yet she was, and her family hid her for as long as they could before she was discovered and incarcerated until she would turn 18 years old and then be “floated” just for the crime of being born and using us precious oxygen.  In Season 1 and 2, we have watched Octavia blossom from a confident teen into a determined and ferocious young woman.  She was not only the first to venture out the drop-ship door, she was the first to encounter face-to-face a Grounder and the first to fall in love.  Her fearlessness did not just extend to adventure and adversity, she was fearless in giving her heart too — and that loving-heart makes her infinitely strong.  It also aligns her with two of the most powerful men on the show:  her brother Bellamy (Bob Morley) and Lincoln (Ricky Whittle).  Note, I said “aligned” as Octavia will out-race both to face any foe or into battle.  In Season 2, Octavia was even determined enough to join the Grounders and train as one of their own.  Yet, when it came down to the wire, Octavia always sides with her brother.  So it is with trepidation that we watch the previews of Season 3 and wonder if the brother-sister bond may now be broken forever.

In an exclusive interview, star Marie Avgeropoulous talked about the looming threats against Octavia and her relationships with her brother and Lincoln.

So as we have seen from the promos, it looks like Season 3 starts out with Lincoln and Octavia enjoying some romantic time together.
MARIE:  [Laughs] For a minute, until it hits the fan again. It was a nice moment.  It quickly dissipates because war breaks out.

What is it about the amazing, electric chemistry between you and Ricky Whittle?
MARIE:  Ricky Whittle is such a wonderful man to work with.  He makes me laugh between takes.  I just think their “Romeo-and-Juliet” romance is so special when they meet because they are constantly risking their lives for one another — risking what their people will think of them, even if their clans completely disown them — just to be together.  So that dynamic is always shifting and changing.  It always fascinates me.

It appears that Lincoln and Octavia make a priority of love and very few characters on the show actually do that, as they are all about survival. So that is a beautiful thing about your characters — they really prioritize making time for each other and doing anything for each other, which is remarkable.
MARIE:  Yeah.  It is important in any love relationship — to remind yourself that it is not always strictly business and have some intimacy time together.  Definitely.  And I really enjoy that this has been the longest standing relationship on the show, as well.  The fans have really taken to us and they model our love lives.  So I guess there is something to be said about that and everyone taking that into their personal lives.

The other strong relationship is Bellamy and his sister Octavia.  It has also been a consistent and beautiful relationship from the very beginning.  So you are portraying these dual, beautiful and loving relationships: one with a brother and one with a lover.
MARIE:  Absolutely.  I really enjoy being the only person on the show having a sibling.  I think that is a very unique and special relationship because Octavia spent so much time trying to find out who she is and her inner-strength.  Then, thanks to Lincoln, she thought she was a Grounder; then she reminds herself, “But wait, I’m always going to be a Blake and these are my people.”  It is just such a special thing that no matter what, Bellamy and Octavia always have each other and are constantly making epic sacrifices for one another.

From the previews, we have seen that Bellamy and Octavia may be at odds this season. Is that a false teaser that the show is putting out there?
MARIE:  Bellamy does some things or rather Bellamy makes some decisions that will forever change things in their relationship and Octavia’s world is completely shattered, if not destroyed, because of it.  It’s bad.

So their relationship may not be retrievable after that?
MARIE:  I hope it’s retrievable.  He has such a maternal-instinct for her because he essentially did have to raise and protect her, as you saw in the flash-backs.  For myself, I hope there is more flash-backs to show and explore that story of what Bellamy and Octavia were like when they were still on the Ark.  But what is going to happen will forever change their relationship, undeniably.  I don’t know how they will move forward after that one.

Will that force Octavia to lean back on Lincoln then?
MARIE:  She always leans back on Lincoln.  Because at the end of the day, when Bellamy didn’t believe in and thought she was this little sister who was not independent and strong, it was Lincoln that saw that in her and showed her (and Indra as well) that she is independent and strong and fierce and brave.  She excels in the face of really dark and dangerous situations.

Speaking of Indra (Adina Porter), is she going to be taking Octavia back under her wing again?
MARIE:  For sure.  Indra mentored Octavia for so long to help her become the complicated character that she is.  In Season 3, when Indra has been taken back and had to take a knee because of another whole situation that happens, Octavia gets to sort of mentor her and remind Indra of the person she is, in a way, and where she came from.  So it’s sort of nice to see that these two powerful women completely flip-flop positions.

To see just what terrible thing creates such a divide between Bellamy and Octavia, and what ultimately puts Indra in a position to seek out Octavia’s help, be sure to tune for the Season 3 premiere of THE 100 on Thursday, January 21st at 9:00 p.m. on the CW.  All hell is about to break loose.