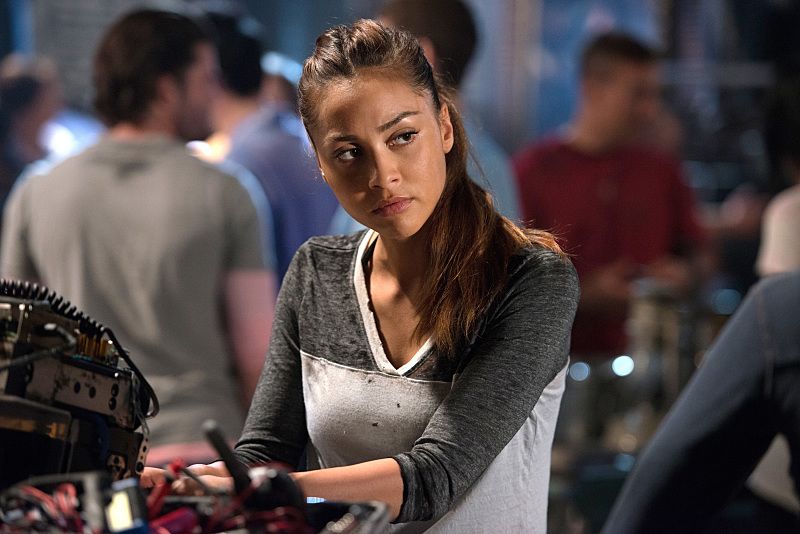 After 97 years in space, humankind was finally ready to return to Earth.  But first they had to determine if the air quality was habitable and they sent THE HUNDRED down in a drop-ship as an advance party.  But for Raven Reyes (Lindsey Morgan), being separated from the man she loved and knowing that the drop-ship was unable to communicate after it hit the planet surface, she bravely jumped into a refurbished escape pod to find out what was going on for herself.  Raven was like an angel sent from Heaven.  Without her, the hundred would have never been able to communicate with those still in the Ark and perhaps never been able to successfully hold off the first wave of Grounder attacks in the Season 1 finale.  Raven was also instrumental in taking down the remote missile system in the Season 2 finale that would have left her people exposed to attack by the Mountain Men.  But Raven has paid a heavy price for her heroism and selflessness: she has been injured time and time again, and has never quite recovered.  With her body broken and her spirit unbowed, Raven is a force to be reckoned with in Season 3.

In an exclusive interview, star Lindsey Morgan talked about Raven’s struggles with her disability and the trauma she has survived, and whether there is hope for a new love in Raven’s life.

Season 3 shows that Raven’s journey is going to become even more tortured.
LINDSEY:  [Laughs] Could it get any worse? Yes.  Yes, it can!  It’s insane.

Of course, fans are going to want to know coming off the Season 2 finale, what happened to Wick (Steve Talley). Can you address that right away?
LINDSEY:  They broke up.  Off-screen.  That may have to be never exposed as to why.

But it did happen.
LINDSEY:  Yes, but it will be forever a secret of THE HUNDRED.

Fans are going to want to know.  So we’ll just get it out there.
LINDSEY:  Of course!  They always want to know.

So now Raven is single again.  Are there any men in her future?
LINDSEY:  Yes.  So many!  [Laughs] No, there are no men in her future and I kind of like that because it really allows Raven to no longer be defined by a man.  Raven came on to the show as Finn’s girlfriend and it became very apparent that she was so much more than that.  That is what I think is so great about that show, that each female character is not defined by their relationship — be it with anyone, a man or woman.

As it should be, there are some higher stakes involved here.
LINDSEY:  Exactly. There are a lot more things to care about.  But also, being an actress in Hollywood, there’s so many other projects where it’s about playing the girlfriend or the hot girl or the girl who takes her clothes off and there is none of that in this show.  As much as I love Steve, who played Wick, and everything, I do find it exciting that Raven is on her own.  Really on her own and finding herself without any romantic counterpart to juxtapose with her.

Of course, Raven has the PTSD now to deal with.
LINDSEY:  Yes, Raven is in the beginning a very, very dark place.

So is Jasper (Devon Bostick). You would have thought they would have bonded of their shared darkness.
LINDSEY:  I think you will see an interesting interaction with Raven and Jasper, but the thing is that Jasper and Raven are dealing with their pain in very different ways.  Whereas, Jasper is kind of reacting to everything and is very emotional, Raven is blocking everything out and blocking everyone out.  All of Raven’s main obstacles, whether it is the chronic pain in her body and the depression — she is in a very deep, deep depression from all the pain and all her losses — it is invisible to anyone else.  But these are the biggest obstacles.

Abby (Paige Turco) seems finely-tuned to it.  She seems to be aware what is going on with Raven.
LINDSEY:  Abby is aware of it, but Raven won’t let Abby in. She is in her pain and depression hole and it is well-guarded.

The one person who it seems to break through occasionally is Octavia (Marie Avgeropoulos).  It is like Raven can appreciate that Octavia has created an identity and world for herself, and wants to emulate that.
LINDSEY:  I think Raven and Octavia have so little interaction, which is a bummer, but I do think she would find some common ground with her.  So, yeah, definitely.

Octavia kind of started out as the victim where the show started and she then created her own identity out of it and became this new person.  It has been a real growth experience for her.  I could see that Raven could do the same thing.  Raven was defined initially by her station in space and then she was defined by her relationship when she came down to Earth initially and now she has the freedom to choose: who do I want to be?
LINDSEY:  Yeah, I love that.  I think you are absolutely right about that.  It was like she really had to hit rock-bottom to realize, “Okay, this is the circumstances now, this is me now, and this is my life.  What am I going to make of it?”

What does Raven think of the Grounders?  It has been a difficulty for her, obviously, because they have inflicted pain on her personally.
LINDSEY:  I’ve had this conversation a lot with Jason [Rothenberg] and the writers about Raven’s take on it — because she blew up a lot of Grounders in Season 1 and burned down a couple of villages with rockets, without knowing.  Raven has never had ill-intention for anyone, but when it comes to protecting her own, she is fiercely loyal and fiercely protective.  So everything that happened with Finn (Thomas McDonnell) — that was tough — but I think she also saw that Finn really crossed a line.  I think Raven would just like to find peace with the Grounders and with everybody.  She’s not a wildly political person.  She just wants to build cool things.  But I also think there is an honesty to that because she isn’t political.  [Laughs]  I always think it would be interesting if Raven were Chancellor because she would be like, “Everyone, calm down! We’re doing this.”

So whoever is current Chancellor should watch their back?
LINDSEY:  [Laughs] Basically.  But Raven has a big fear of public speaking.

We have not quite seen this, but if Raven were to enter the world of where Jaha (Isaiah Washington) and Murphy (Richard Harmon) had gone off to, how would she take to that?  Would that be something that is exciting for her because of her background with engineering?  That might be a fascinating world for her.
LINDSEY:  Yeah. I think where Raven’s interest lies is definitely science and mechanics.  So I think being a part of a world like that would really fascinate her.  It would be a new identity for her and it would be a beautiful place for her to grow.

Another dynamic we do not see enough of and, maybe we will, is we do not get to see Raven interact with Lincoln (Ricky Whittle) as much.  That would be kind of awesome.
LINDSEY:  That would be so awesome!  Me and Ricky are such good friends naturally, so it is kind of a bummer.  We kind of came on in Season 1 together and yet we really never get to do that.  I’m always suggesting stuff like:  Lincoln should teach Raven to fight or Raven teaches Lincoln how to build something or how to drive.

Raven’s someone who has endured a lot and he’s endured a lot.  So Lincoln would be someone she’d be real comfortable with.
LINDSEY:  Raven’s a warrior in her own sense.  She may not have the Grounder face-paint to show anyone her fierceness, but her heart is the fiercest.

What kind of things is Raven going to be doing this season, besides fighting her PTSD?  Is she going to be coming up with new devices or ways to help the Sky People adapt to this new environment?
LINDSEY:  Raven’s mind has always been a giant asset in every situation.  So I think that plays a giant card in the entire survival of the group, like always.

Sounds ilk Raven is their secret weapon when it comes to survival.
LINDSEY:  Yes, yes.  She’s very valuable.  For her to be lost would be quite the vulnerability to our friends.

So they should be keeping a close eye on her then!
LINDSEY:  [Laughs] Definitely.

To find out just how key Raven is to saving everyone yet again, be sure to tune in for the Season 3 premiere of THE 100 on Thursday, January 21st at 9:00 p.m. on the CW.  Pity the fool that gets in her way.