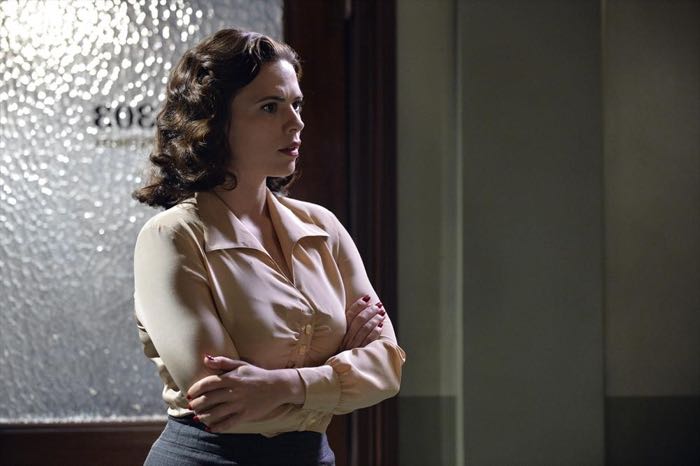 On Day 8 of the 16-day biannual Television Critic’s Association Winter 2015 Press Tour,  ABC introduced its featured programming, and the following are quick takes of its new 2015 mid-season series.

Thanks to its strong debut of “How To Get Away With Murder” and “Black-ish,” ABC is currently riding on a creative and ratings high.  Naturally, it has made ABC feel bold and ABC is debuting no less than 6 new mid-season series over next few months, including: “Marvel’s Agent Carter,” “Galavant,” “Fresh Off The Boat,” “Secrets and Lies,” “American Crime,” and “The Whispers.”  (In the past two weeks, “Agent Carter” and “Galavant” debuted, “Fresh Off The Boat” debuts in February, followed by the premieres of “Secrets and Lies” and “American Crime” in March and “The Whispers” premieres early Summer 2015.)  During the ABC executive session, president Paul Lee boldly claimed that ABC has six of the Top 10 dramas on television right now.  In a world where television audiences have an abundance to choose from, Lee noted, “We are in a world where passion rules” and “the demand for least objectionable TV is dead.”  Viewers are just not interested in watching TV shows not willing to take chances and offer something fresh to watch. Lee also noted that the demographic changes in America are just as important as technological changes. Lee also assert that this is a great age of TV on every platform — from broadcast to basic cable to pay cable — there is great storytelling everywhere and he welcomes competition. He noted that the great actors of film are no longer finding what they want in movies and  are coming to television.  Noteworthy, Lee announced that both “American Crime” and “Secrets and Lies” are intended to wrap up their principal mysteries/story in one season and then continuing as anthology series with new stories/mysteries — if either extends beyond their first season.  This is a smart move given the increasing viewer-fatigue with serialized dramas that do not conclude their principle mysteries in their first season (e.g., “The Killing” or “Lost”).  Lee stated that that while “Revenge” is a critical brand to ABC, it will see where they go with that later this Spring.  He also said that, “We’ll see where we go with it” but feels there are ways to reinvent it if it does get picked up for the 2015-16 season.   ABC’s Paul Lee was also impressed to find out estimate 40% of city of Nashville’s tourism comes from “Nashville” fans from around world.  Given how passionate “Nashville” fans are, this seems to bode well for a fouth season should ratings hold steady in Spring 2015.  He also said that “TGIT is really a big cultural phenomenon. We’ve encouraged millions of people to take out wine and popcorn every Thursday night.”  He also does not mind that television viewers are increasingly binge-watching as it brings new fans to shows like “Scandal.”  He even acknowledged that ABC may not have turned “Scandal” into the powerhouse it is without the ability for viewers to binge-view it.  An interesting side-effect of viewers’ binge-watching is that once they are caught up with an existing TV show, it allows them to jump in and watch live to join the real-time experience and global conversation.

Talking about ABC’s new gritty drama “American Crime,” ABC’s Paul Lee said it is raw, emotional and has a power-punch of a Season 1 finale. Executive producer John Ridley really wanted to explore not just the police or legal aspects of a crime, but the impact on a victim’s family.  Interestingly, Ridley also noted that “people are rightly or wrongly going to draw parallels with what we’re doing” as the show strives to honor, not exploit, and that recent events like Ferguson have sadly solidified “American Crime’s” relevance. Ridley also stated that city of Modesto is an amazing canvas as a backdrop for new ABC drama.  (The “American Crime” story is set in Modesto, California, but actually films in Austin, Texas.  Go figure!)  “American Crime” is also planned to have multiple seasons, but may feature new actors and a new storyline each season, like an anthology series. (Observation: ABC’s new series “American Crime” is harrowing. Very dark, depressing. Not sure will appeal to viewers on Thursdays at 10 pm after “Scandal.”)

“Fresh Off the Boat” is based loosely on the book penned by executive producer Eddie Huang who noted that people want specific stories, like the shows being offered on Amazon a d Netflix and that is what he aims to bring in his series.  “Fresh Off the Boat” is set in the 1990s because that reflects Huang’s childhood before the Internet exploded. When asked what led them to cast break-out start Hudson Yang, Eddie explained, “We liked how real he was. He seemed like he had an ornery streak.”  As to the killer timeslot (Tuesdays at 8 pm), executive producer Nahnatckah Khan said, “My first reaction was I have to call my mom, because she’s going to be REAL conflicted” as a fan of “NCIS.”  In order to try to get more viewers to sample the show, ABC’s “Fresh Off The Boat” comedy premieres on Wednesday, February 4th a t 8:30 pm and  9:30 pm, then moves to its regular timeslot Tuesday, February 10th at 8 pm.  (Observation:  Like many other TV critics, I am completely charmed by both Constance Wu’s performance as the mother and Hudson Yang, as young Eddie Huang, who is incredibly funny.  ABC’s new family comedy “Fresh Off the Boat” is really LOL funny. Fingers crossed it can tackle its Tuesday 8 pm timeslot. Rooting for it!)

Also upcoming on ABC, “Secrets and Lies” poses terrifying situation of: what if you found young child’s body, then found yourself as the prime murder suspect?  Ryan Phillippe’s character finds child’s dead body and is horrified when he sees neighbors and even his own family views him as the prime suspect.  Phillippe said it was hard portraying this role as, “Every day I was playing a guy whose life was falling apart — who was accused and who was slandered.”  It was exhausting; plus, his character is in every scene.  Phillippe said he could relate to his character being a father at the center of a media firestorm as “When something is salacious, how it is presented by the media becomes the perceived truth.”  Portraying Phillippe’s characters wife, KaDee Strickland said, “What I love about playing Christy was the complications of a marriage.” It is is about waking up after 10 years to discover your spouse or partner is not who you thought they were. Talking about how she fleshed out her character, Detective Cornell, Juliette Lewis said, “I changed everything about my demeanor. You have to assert control.”  Also to better prepare for the role, she did ride-alongs and observed real detectives.  She described the experience as horrific, seeing real-life crime that up close. Executive producer Babie Klighman laughingly admitted that ABC president Paul Lee’s actual note for the pilot was to have more secrets and more lies, and then expanded the series from 6 to 10 episodes for its first season.  So even with the addition episodes, Kligman confirmed that the mystery of Ben Crawford and mystery of who killed the boy will be resolved at end of Season 1.  (Observation: The setting and cinematography for ABC’s “Secrets and Lies” really sets a fantastic tone and visual for the show. It really draws you in.  The hook of ABC’s “Secrets and Lies” is seeing the story through Phillippe’s character’s eyes and wondering: Is he being wrongly accused of murder? And, if so, then who did it?  It is also reassuring to know that ABC’s “Secrets and Lies” will resolve its mysteries by the Season 1 finale. It is hard to combat viewer-fatigue with drawn out stories.  If viewer knows they will get answers by end of season, then they are more likely to watch.) “Secrets and Lies” premieres March 1st, airing Sunday nights at 9 pm taking over the “Resurrection” timeslot.

Another spooky new series offered by ABC is its supernatural drama “The Whispers.”  “The Whispers” asks: what if someone or something were controlling or influencing your kids to do bad things? It is a story about a series of children who are influenced by someone or something known as Drill to commit terrible crimes — and just who or what is Drill is the central mystery.  Executive producer Soo Hugh noted that Drill understands children’s vulnerabilities and manipulates them.  It is every parents’ nightmare.  He really wants viewers who are watching the show to wonder what is really going on because something is clearly influencing the children and you do not know quite what it is.  Executive producer Zach Estrin explained, “These kids are all chosen for a very specific reason.” He hastened to reassure, “We’re not doing an evil kid of the week show.”  Star Milo Ventimiglia plays amnesiac, who is a mysterious character and the show quickly explores if he is good or bad and if he could be behind the seemingly bizarre string of crimes. Also co-starring are Lily Rabe and Barry Sloane, who begin to see a pattern in the crimes and the children — and the digger they dig, the more terrifying it becomes.  (Observation: Unlike the CW’s “The Messengers,” “The Whispers” is not a show about angels and demons.  Think more other-worldly.  “The Whispers” is tentatively scheduled to premiere after NBA wraps, this summer.)

From its debuted last week, ABC’s new series “Agent Carter” takes fans back into the post-World War II era when S.H.I.E.L.D. was getting established.  As executive producer Jeph Loeb said for “Agent Carter,” they try to hit three key elements:  (1) heroes come from empathetic place, so they are aspirational, (2) Marvel is all about hope, and (3) a bit of humor.  Loeb further noted that “Marvel is all about hope and at the end of every episode, you have a feeling that everything is going to be okay.”  He added that to balance the darker stories that there has to be a bit of levity and humor in the “Agent Carter” world, which is great since the cast gets to play both dramatic and funny sides of life.  Reflecting back on the “Captain American” films, Haley Atwell said, “We saw glimpses of what she could be, but this is exploring her vulnerability, humor and wit.”  So audiences only had a glimpse of what Peggy could be in “The First Avenger,” but clearly the writers knew there was much more to explore.  As to the burning question whether Lyndsy Fonseca’s character Angie is a spy, executive producer Michele Fazekas coyly said, “She can meet Peggy toe to toe.”   In addition, when they were looking to populate Peggy’s life, executive producer Stephen McFeely said, “Peggy had to have a confidante, and Edwin Jarvis (James D’Arcy) is that character.”  They wanted her to have a reason to jump back into the spy world that would be compelling enough to push her off the cushy couch of pre-war life.  Loeb would not say whether will crossover with “Agents of SHIELD,” but did hint that it is all connected. So be on the look out for that.  (Currently “Agent Carter” airs Tuesday nights at 9:00 p.m. on ABC.)

That is a wrap on Day 8 at TCA Winter 2015.  Look for more upcoming snapshots from TCA on the new shows and TV specials coming up for Winter/Spring 2015 here at Seat42F.com.