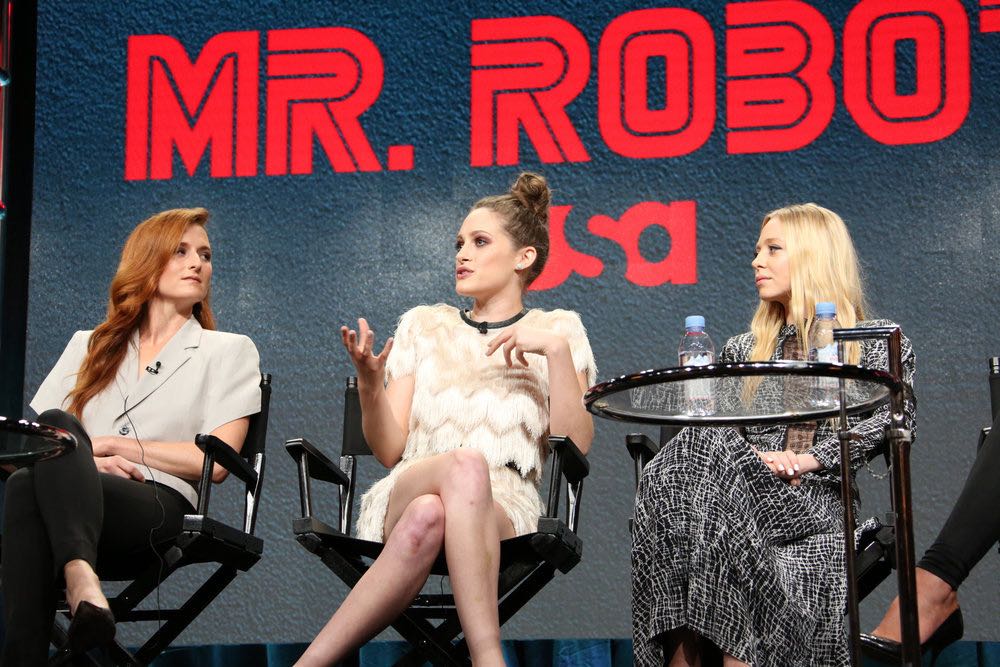 This Summer’s TCA tour included presentations from Syfy and USA Network, who presented on the eighth day of the tour. Here are some of the featured television shows and specials that caught our attention:

SUITS renewed for Season 7.
FALLING WATER premieres October 13, 2016.
EYEWITNESS premieres October 16, 2016.
SHOOTER starring Ryan Philippe has been postponed to a date undetermined at this time after so many real-life tragedies involving sniper and/or gun shootings.

USA Network’s new drama series FALLING WATER is about three people who slowly begin to realize they are dreaming different parts of the same dream. While the core mythology will be established in Season 1, executive producer Gale Anne Hurd said the show will continue to follow the characters paths beyond that, if picked for Season 2. Hurd emphasized that the show is “grounded in the emotional needs of our characters.” FALLING WATER stars Lizzie Brochere, David Ajala (BEOWULF) and Will Yun Lee (WITCHBLADE) as the dream-sharing trio. Then adding another layer a mysterious woman portrayed by Anna Wood, and one of biggest mysteries is whether she real or not. FALLING WATER promises it will not hold back on its mysteries or drag them out. So viewers will find out answers as the characters do. Of special interest, in FALLING WATER, characters can enter each other’s dreams and change their awake lives. Co-executive producer Blake Masters described the show as a metaphysical thriller infused with a lot of humanity and said : “It’s about something everyone in the world does: [dream]. . . It’s a drama . . . more than [just] a science fiction premise.” As to concerns that it will be hard to distinguish between what is real and what is just a dream, Masters said: “There are definitive clues to what has been a dream or will be a dream.” Though star David Ajala admitted: “It’s the most physically demanding, spiritually challenging stuff I’ve done in a while.” (Impression: I have watched the first 2 episodes and FALLING WATER is spectacular. Truly great sci-fi and I am already a fan .) FALLING WATER premieres October 13, 2016 on USA Network.

In a special panel entitled “Decoding Season _2.0 With The Women Of Mr. Robot,” USA Network showcased the remarkable women who co-star in MR. ROBOT: Grace Gummer, Carly Chaikin, Portia Doubleday, Stephanie Corneliussen, along with USA Network’s Vice President of Development Dawn Olmstead. Olmstead described the MR. ROBOT female characters as: “They’re flawed and they’re complicated. [Such as] besides being ambitiously strong, Darlene had to stay in the background to set up her big Season 1 reveal and now she can move to the foreground.” Carly Chaikin who portrays Darlene said: “We never succeed on any of the hacks the first time. . . [we] have to find another way. . . We are all so flawed . . . and I love that.” She also loves the fact that in the show Elliot (Rami Malek) frequently goes to his hacker sister Darlene for help. In fact, it was Darlene who actually wrote the code that takes the system down in the Season 1 finale: “There are such amazing female hackers. It’s really exciting for me to represent that.” Co-star Stephanie Corneiliussen added: “But we are not unrealistically empowered either . . . I love that Joanna gets to push the limits. She gets to walk on the edge.” As to cutting-edge and provocative scenes that she portrays, Stephanie laughingly said: “It is a mesh of female and masculine energy and it’s fun to do.” Then as to Angela’s seeming transition from good girl to bad girl working for the enemy, co-star Portia Doubleday said that Sam Esmail had hinted to where Angela was going to be at the end of the first season and she is thrilled to get to portray Angela’s ruthless corporate side. Portia added: “People thought Angela drank the Kool-Aid. [But] Angela’s working within the beast. The characters are multi-layered and there’s something so realistic about Angela.” She added that in the end that Elliot and Angela want the same thing: to take the system down, but they go about it in different ways — from inside vs. outside. Newcomer Grace Gummer added that she views it as: “All the characters live in this gray area. Sam [Esmail] is good at creating that.” Then as to her character Dominique, Summer sees her as “multifaceted, complex, somewhat strange and that she “uses her badge and gun as a mask.” In the murky and morally-ambiguous world of MR. ROBOT, all the female characters are pushing beyond the constraints that society would normally seek to impose on women. That is one of the unexpected joys of the series: finding it holds a powerful feminist heart at its core. MR. ROBOT celebrates and reissues multifaceted, strong women. (Impression: I am as enthralled by MR. ROBOT and the amazing world it has created.) MR. ROBOT is currently airing Wednesday nights on USA Network.

A futuristic thriller, Syfy’s INCORPORATED offers world where one mammoth corporation controls the world and it is all about the “haves vs. the have nots.” Executive producer Ted Humphrey calls the show “grounded speculative fiction” — showing a future that could actually happen. At the center of the INCORPORATED world are characters portrayed by stars Sean Teale, Julia Ormond, Dennis Haysbert. Dennis Haysbert described his character as a man who is simply trying to protect his family. Similarly, Sean Teale’s his character also seeks to find and rescue his lost love who had been abducted years before. Then standing above them both is Julia Ormond’s character,who occupies a pivotal role in both their lives. INCORPORATED does not shy away from the ugly underbelly of a corporate-run world where those who live in the “green zones” want for nothing and those who live in the “red zones” have next to nothing and must sell their bodies and souls in order to survive. (Impression: With the caveat that I have only seen one episode, I am not yet sold on INCORPORATED. It is world where some have everything and abuse it, and others have nothing and are abused. Thus, I am not sure it is world I want to spend time in and continue watching. It feels a bit “soulless” and reminded me a lot of the film “Strange Days” starring Ralph Fiennes, which I also did not care for.) INCORPORATED premieres November 30, 2016 on Syfy.

NBC’s newest daytime talk/entertainment show entitled HARRY is a fabulous showcase for musician and entertainment artist Harry Connick, Jr. HARRY will offer a large variety of features: from musical performances to special guests to cooking meals and to just getting out on the street and meeting the average folks and interacting with their lives. Harry Connick, Jr. promises: “We’re not going to play games. We’re not going to put [people] in dunk tanks. . . and we’re not going to do pre-interviews.” He intends to keep everything on the show respectful and spontaneous and in the moment. He wants to have real moments connecting with guests and the people he meets. NBC Universal will produce HAARY and it films in at the CBS Broadcast Center in New York City, yet will be distributed through Fox affiliates. (Impression: Harry Connick, Jr. is charming and his hope to have a fun and friendly show sounds infectious and enjoyable. Suspect this could be a huge hit for NBC.) HARRY premieres September 12, 2016 on syndicated networks.

That’s a wrap on the network and studio presentations from Day 8 of the Summer 2016 Television Critics Association Tour. As a reminder: be sure to mark your calendars for the upcoming new series and specials as you do not want to miss out on the next great TV show that everyone will be talking about.