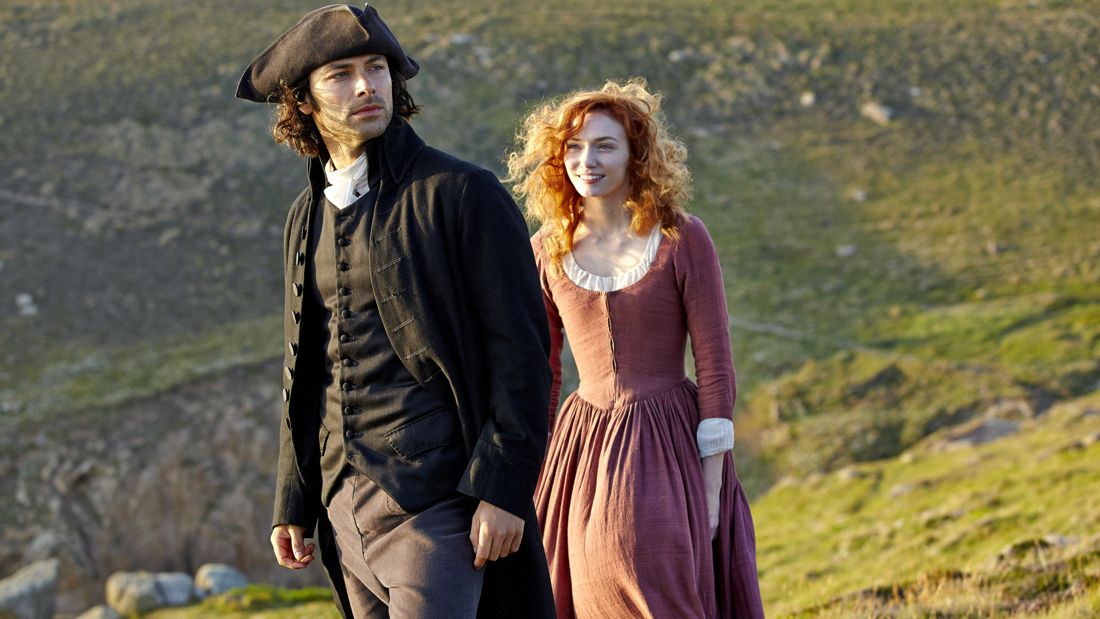 This Summer’s TCA tour included presentations from PBS, who presented on the second and third day of the tour. Here are some of the featured television shows and specials that caught our attention:

With an abundance of diverse programming, PBS remains a destination for prestige dramas and powerful documentaries.

PBS’ presentation of its new children’s entertainment series SPLASH AND BUBBLES is a charming look at modern day digital puppetry which creates a visually stunning, imaginative, and interactive TV world for children. SPLASH AND BUBBLES is part of PBS Kids new 24/7 programming schedule geared to provide children round the clock family-fun entertainment. Appearing for the Q&A panel: Lisa Henson, John Tartaglia and Leslie Carrara-Rudolph, who talked about bringing the magic of life “under the sea” to young children through the art of digital puppetry. Amazingly, robotic-looking arm devices — like what would be used in a video game — are used to animate cartoon characters to give the experience of interacting with digital characters in real-time on screen. (Impression: Adorable kids show that is fun for the whole family.) SPLASH AND BUBBLES premieres November 23, 2016 (the day before Thanksgiving).

Broadway performer Lin Manuel Miranda will host 6th Annual PBS Arts Fall Festival, which includes HAMILTON’S AMERICA, which is a behind the scenes special covering the 3 years leading up to the Broadway opening. It consists of brief performances, interviews and an exploration of Alexander Hamilton’s personal history, which also features taped moments from the Broadway production. (Note: PBS is not actually airing the musical “Hamilton,” just the behind the scenes interviews and clips). Appearing for the Q&A panel were: Daveed Diggs and filmmaker Alex Horwitz, who were awed by the cultural explosion and impact of a theatrical performance created for Broadway that captured the hearts of fans across the world. PBS Arts Fall Festival starts October 21, 2016 (on Fridays) this Fall.

DEFYING THE NAZIS: THE SHARP’S WAR

The latest film by Ken Burns and co-presented by Artemis Joukowsky, DEFYING THE NAZIS: THE SHARP’S WAR is the true story of a young couple who took it upon themselves to rescue hundreds of children from the Nazis over a two year span during World War II. Both heart-warming and heart-breaking, this film shines the light on an act of true selfless courage by a young couple who could not bear to stand by and do nothing for the children. As a young boy, director Artemis Joukowsky was struggling to find an example of a person who had exhibited an act of pure courage for a school paper and his mother said: “Talk to your grandmother, she did some cool things during World War II.” And that was what inspired him to bring this remarkable true story to light and, with the assistance of Ken Burns, the Sharp’s miraculous tale of defiance and courage is finally being recognized. (Impression: It only takes one person’s courage to make a difference and it is wonderful to recognize those heroes.) DEFYING THE NAZIS: THE SHARP’S WAR premieres September 20, 2016 on PBS (narrated by Tom Hanks).

The smolder factor is back in fine form in POLDARK Season 2 as the simmering love triangle of Ross-Demelza-Elizabeth continues to heat up with tragic ripple effects on the lives around them. Appearing for the Q&A were executive producer Rebecca Eaton along with stars Aidan Turner, Eleanor Tomlinson, Heida Reed. Previewing the themes and stories that Season 2 will address, Eleanor mentioned that Ross/Demelza are working on their marriage and the show explores all the relationships that appeared so solid in Season 1 and the fact that Demelza is terrified that Ross will be taken away from her forever. But Eleanor is very happy that Demelza has continued to grow thoughout the series. Aidan added that in Season 2, there is more with the Ross-George rivalry, as well as ups-and-downs for all the characters. Aidan felt that POLDARK wonderfully explores the central question of, “Is it possible to be in love with two people?” He noted that for Ross: “Essentially, it is love, isn’t it? Unfinished business.” When pressed, he elaborated by saying: “[Ross] is a heavily flawed character, that’s what I like about him . . . He’s got a nasty side . . . [and] he seems quite real.” Fortunately, the POLDARK journey is not close to ending anytime soon as a third season of 9 episodes has been ordered and the 7-month filming of Season 3 begins in September in Cornwall (exterior scenes) and Bristol (in studio). For those tracking the story along with the books, Aidan confirmed that Season 2 ends about the same point of the fourth book in the series. (Impression: Aidan Turner is a bit of a flirt with his castmates and it was adorable watching them interact. Seasons 2 and 3 remain on my must-watch list.) Season 2 of POLDARK premieres September 4, 2016 on PBS.

PBS’ new drama series VICTORIA is a sweeping romance based on the true story of Queen Victoria, who was crowned queen at the tender age of eighteen and quickly fell in love and married a German prince. Their whirlwind romance was renown as they were married after only a single week of courtship. In fact, to give them some privacy, Prince Albert had a special lock created so that he could lock the bedroom door without leaving the bed, and Victoria and Albert went on to have nine children. Victoria’s young age and the fact she was so tiny made people around her under estimate her abilities and as a result she reigned for a tumultuous 63 years. Season 1 covers the first 3 years of Victoria’s reign and subsequent seasons would cover the time period after that. As executive producer Daisy Goodwin explained, Victoria was quick to assert her own power and identity when she insisted on calling herself Victoria: “Not only did she take control, but she literally invented her own name.” Another fun fact: Queen Victoria wrote over 62 million words in her diaries. She was a prolific writer and, other than the portions her daughter burned to protect her mother’s privacy, those diaries are one of the most complete collections of dairies of a reigning monarch. Another cool fact: the show built life-size sets that recreated Buckingham Palace in Yorkshire. VICTORIA stars Jenna Coleman as Victoria and Tom Hughes as Albert. (Impression: The scenes with Jenna Louise Coleman and costar Rufus Swell look AMAZING. It is another TV show I am adding to must-watch list.) The 8 part mini-series follows Victoria’s reign and premieres in January 2017.

PBS’s long-running NOVA series continues with its global expedition as it explores mankind’s remarkable journey from one tiny geographic region in the Middle East to the far corners of the globe. The show found that it only takes food and resources and man can travel across vast deserts and frozen tundra and into the depths of the sea — for man is curious and that curiosity pushes him farther and farther to see what lies beyond the horizon. It found that human curiosity is great drive than the relentless pursuit of food. Nova’s “The Great Human Odyssey” premieres October 5, 2016.

THE HOLLOW CROWN: “The Wars Of The Roses”

Executive producer David Horn explained that “The Wars Of The Roses” story examines what kind of people make great leaders and which do not have the skills to do the job and get things done. Appearing for the Q&A were: Tom Sturridge, Sophie Okonedo, Dominic Cooke and David Horn. “The War of the Roses” production also co-stars Benedict Cumberbatch as Richard III. For star Tom Sturridge, he said that he was fascinated by the fact that his character Henry VI did not actually want to be king. To portray a reluctant leader was a fun challenge. Costar Sophie Okonedo added that for her, it was just filming in the fields, rivers and the heavy costumes that made everything feel so very real and visceral for her. From her perspective, Margaret remains one of the most powerful women in Shakespeare as she was such a badass. (Impression: For those unaccustomed to listening to pure Shakespeare dialogue, the scenes can be a bit intense to listen to and decipher what is actually being said. In addition, it distinctly feels like you are watching a live play versus an actual television series.) THE HOLLOW CROWN: “The Wars Of The Roses” premieres December 11, 2016 on PBS.

Renewed for a second season, PBS drama series MERCY STREET reruns with more stories of a small community and make-shift hospital who struggle to aid the soldiers and families caught up in the U.S. Civil War. From the doctors to the nurses to the soldiers to all the surrounding lives caught in the crossfire, MERCY STREET is a harrowing look at the cost of war and the triumphs against its physical and mental suffering. Season 2 starts in June 1862 and goes through September 1862 and explores the aftermath of Battle of Antietam. For fans wondering what’s next: Mary and Emma’s stories align as they continue to wrk in the hospital, while Dr. Foster’s drug addiction story takes a backseat and the romance between he and Mary continues to slowly burn with another love interest possibly on the horizon. Also new to MERCY STREET is Patina Miller’s new character Charlotte Jenkins, who is loosely-based on combination of Harriet Jenkins, Sojourner Truth, and Harriet Tubman. Her character helps former slaves learn how to be free. Other new historic characters introduced in Season 2 include: Allan Pinkerton, the Head of Union security, and a brief cameo by President Abraham Lincoln. Shared during the panel was the story of a gravestone of a former slave and the epithet that lauded her as choosing to still be a slave to “love and to duty” even after receiving her freedom from slavery. Another fun fact that was shared was how co-star Tara Summers learned that for couples who were too poor to have a lady’s maid that one way a husband knew his wife was cheating on him was by the lacing of her corset — as a woman could not do the corset lacing herself so if the lacing was different, a husband always knew. (Impressions: Perhaps it was a result of women’s desire for sexual freedom thats ended use of corsets. Second impression: MERCY STREET portrays more than the struggle for freedom from slavery — it depicts how women and former slaves wanted equal opportunities. It is easy to forget that women still did not have the right to vote or pursue occupations at the time of the Civil War; and it is crazy that today women are still fighting for equal pay so long after Civil War was fought for right to be free in U.S.) MERCY STREET returns for Season 2 on January 22, 2017 on PBS.

That’s a wrap on the network and studio presentations from Days 2 and 3 of the Summer 2016 Television Critics Association Tour. As a reminder: be sure to mark your calendars for the upcoming new series and specials as you do not want to miss out on the next great TV show that everyone will be talking about.