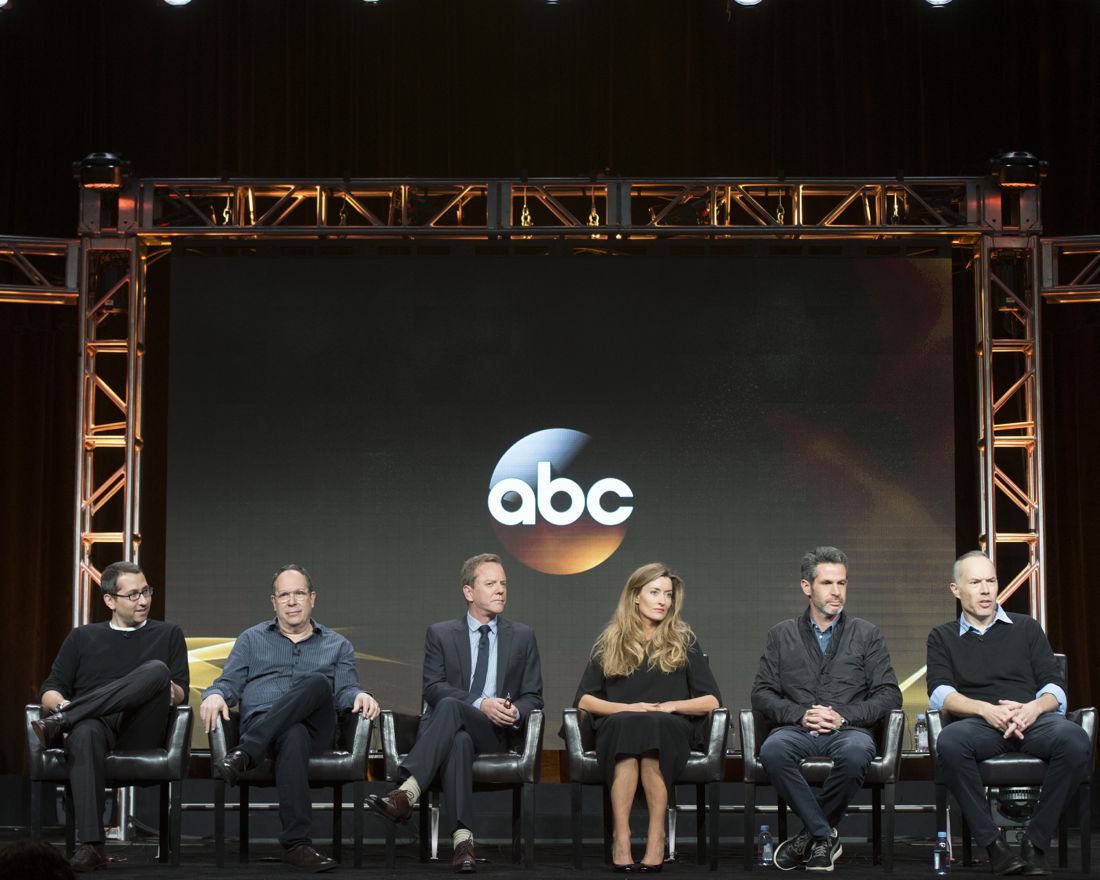 This Summer’s TCA tour included presentations from ABC, who presented on the ninth day of the tour. Here are some of the featured television shows and specials that caught our attention:

Announcements:
ABC has ordered to series the new drama 10 DAYS starring Kyra Sedgwick as a television producer whose police proceduralTV show begins to eerily play out in her real life when her teenage caught goes missing. 10 DAYS estimated to air Spring/Summer 2017 on ABC.

ABC’s new drama DESIGNATED SURVIVOR explores what would happen if the entire U.S. government were attacked and the last remaining low-ranking official becomes the President of the United States in the aftermath. Star Kiefer Sutherland recalled reading the script and instantly realizing that he had to do it, as the story of the everyman who is suddenly thrust into the most important and powerful job in the world held a lot of appeal and felt very timely and compelling. The shows producers also noted that in light of real-would current events, there is a desire to see an outsider take office and someone who is not a “political animal” to lead the United States. So the timing is perfect for this kind of TV show to appeal to television viewers. Kiefer said that his character’s lack of experience in making large scale decisions does not deter him as: “Every situation my character comes across can be dealt with with common sense and patience.” As per executive producer David Guggenheim, the show’s central issue will be: “Can you be a great man and a great president at the same time?” (Impression: Starring Kiefer Sutherland, the show smartly cast an actor who viewers know from Fox’s “24” series and it makes it more believable that a nation would rally behind him in such disaster. As fan of political dramas, I am excited about this show. I loved pilot episode and hope the series delivers.) DESIGNATED SURVIVOR premieres September 21, 2016 on ABC.

ABC’s new comedy series SPEECHLESS is about a family with special-needs teen that moves into a new neighborhood and school, and the resulting hilarious hijinks that ensue. SPEECHLESS stars Micah Fowler, Minnie Driver, John Ross Bowie, Cedric Yarbrough, Mason Cook and Kyla Kenedy. Executive producer Scott Silveri said in creating the show it was simply an attempt to write what he knew and he happened to grow up with a sibling with special-needs. So, for him, the show is a very personal story. Minnie Driver said it takes “a high degree of difficulty” to play a mom of a special-needs child and get the tone just right. She also noted that normal things cannot be taken for granted when dealing with the needs of a special-needs child. Silveri was complimentary of Driver’s performance stating: “The gift Minnie gives us is that you are always on board with what she is doing. . . There’s fight in [her character].” Co-star Micah Fowler said his character is close to his own personality and admires that his character JJ is funnier than his past roles. Cedric Yarbrough then described his character that becomes a part of JJ and his family’s world as: “He genuinely loves [JJ] and he has a good heart.” (Impression: I found SPEECHLESS to be adorable and funny and really look forward to watching it went it premieres. It smartly uses lots nonverbal communication — body language, facial expressions, hand gestures — for fun comedic moments too.) SPEECHLESS premieres September 21, 2016 on ABC.

The new legal drama CONVICTION is both a second chance at redemption and justice for both the daughter of an ex-President, as well as the criminals whose cases she tackles as part of her deal to white-wash her own legal skeletons in the closet. Executive producer Liz Friedman said that they have conversations about flaws in the legal system and use those to create context of some of the show’s drama stories. Starring Hayley Atwell (AGENT CARTER) along with Shawn Ashmore, Emily Kinney, Manny Montana, Merrin Dungey, and Eddie Cahill, CONVICTION is a lighter feeling legal drama. It tugs at the heart without ripping it out as it sets up its hard-luck, miscarriage of justice cases that must be reinvestigated and challenged one last time in the legal system. Star Hayley Atwell said there are elements of her character that gives the feeling that she’s has stayed at the party too long and she did not know how to leave, and that she is both reckless and damaged. Executive producer Mark Gordon in commenting on the unusual dynamic between Atwell and Cahill’s characters said: “Hayes and D.A. Wallace are both highly intelligent & ambitious. There’s an attraction and tension [between them].” To which co-star Eddie Cahill wryly noted: “Hayes is everything Wallace wants. She gives him pushback. She makes a move and he has to keep up.” Co-executive producer Liz Friedman added: “D.A. Wayne overestimates his ability to control and to resist Hayes.” (Impression: ABC’s CONVICTION offers light touch with legal cases and dilemmas. While Atwell’s character is not that likable and does reckless and illegal things, Hayley Atwell is incredibly likable and appealing, which saves the show. Worth a peek to see if you enjoy this kind of legal type show.) CONVICTION premieres October 3, 2016 on ABC.

The premise of ABC’s sizzling new drama series is an elite news producer and high-powered attorney team up to manipulate the news to their professional advantage. While the first episode sets up what could be a continuing criminal case, executive producer Josh Berman quickly reassured that while most of the stories are based on real-life stories ripped from the headlines, each episode will have its own standalone story. NOTORIOUS is inspired by the public personas of famed criminal attorney Mark Geragos and news producer Wendy Walker. What makes NOTORIOUS so pivotal in our social media and true-crime obsessed world is the fact that it shines a spotlight on the intersection of modern journalism entangled in the thorny worlds of law and media. Bringing their chemistry and energy to NOTORIOUS are stars Piper Perabo, Daniel Sunjata, Aimee Teegarden, Sepideh Moafi, Ryan Guzman, J. August Richards, and Kevin Zegers. (Impression: I loved the pilot episode of ABC’s NOTORIOUS. It is just the right amount of light, breezy, sassy, and sexy — and it is just what I want to watch on Thursday nights. Also, as a long time Josh Berman fan from his work with DROP DEAD DIVA, his new ABC series NOTORIOUS is my jam with strong, smart and empowered women. Another awesome perk: NOTORIOUS has Aimee Teegarden. It is great having her and Matt Lanter, who can be seen in NBC’s TIMELESS, back on our TV screens this Fall — Aimee and Matt were amazing in the CW series STAR-CROSSED. So I am certain that ABC’s NOTORIOUS will fill the SCANDAL-shaped hole in your TV viewing schedule for Thursday nights this Fall with its fast-paced, sizzling, and jaw-dropping stories and characters.) NOTORIOUS premieres September 22, 2016 on ABC.

That’s a wrap on the network and studio presentations from Day 9 of the Summer 2016 Television Critics Association Tour. As a reminder: be sure to mark your calendars for the upcoming new series and specials as you do not want to miss out on the next great TV show that everyone will be talking about.