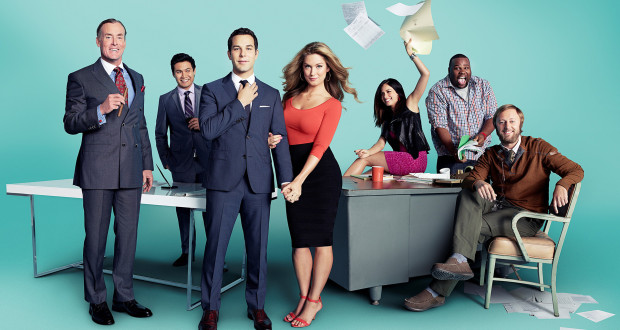 Set in the modern world of corporate America, Ground Floor centers on Brody (Astin), a young, hot-shot investment banker who thought he was just having a one-night stand with Jennifer (Heelan), a beautiful woman he met at an office party. He discovers, however, that she works in the maintenance department for the building where his investment bank- Remington Trust – is located. Suddenly their worlds begin to collide in the most unexpected ways. Facing Brody’s critical boss, Mr. Mansfield (McGinley), as well as annoyed colleagues, the pair must find a way to deal with their growing feelings for each other in this modern take on Romeo & Juliet.

Starring as Jennifer’s co-workers in the building’s maintenance office are Rory Scovel (Zach Stone is Going to be Famous) as Harvard, a know-it-all who’s enamored with her; James Earl (Glee) as Derrick, a guy who is tough on the outside, but a pussy cat on the inside and always looks out for his friends; and Alexis Knapp (Pitch Perfect) as Tori, a sexy young woman who loves to hit the clubs every night and catch up on her sleep at work. In addition, Rene Gube (Upright Citizens Brigade) stars as Brody’s colleague Threepeat, a competitive go-getter who’s not quite as shallow as he seems.

As the first season of Ground Floor ended, Mansfield forced Brody to make a choice between opening up the company’s new Hong Kong office, or joining Jennifer for a vacation in Paris. Brody chose Jennifer, which may mean he’s now out of a job. Meanwhile, Threepeat wound up rooming with Harvard after giving up his old apartment in hopes of getting the Hong Kong assignment.