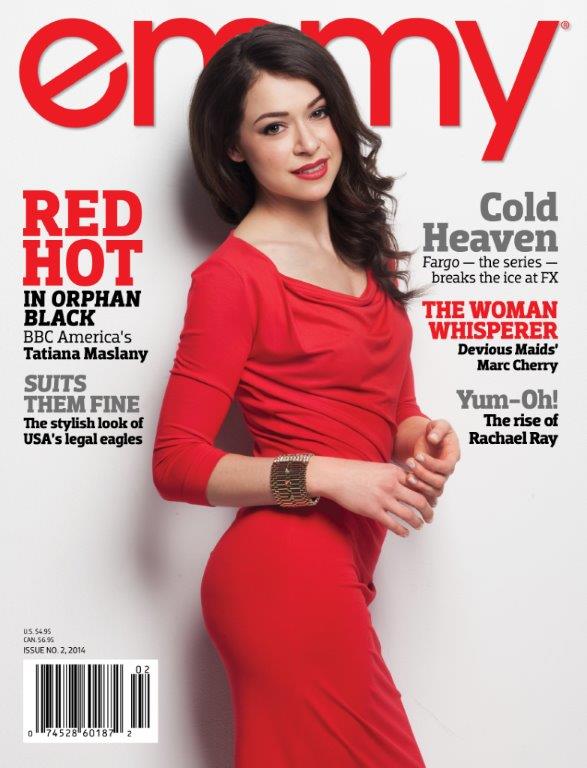 BBC America’s Orphan Black star Tatiana Maslany appears on the April cover of the award-winning emmy® magazine, the official publication of the Television Academy on sale starting today. The actress is fresh-faced in a red-hot Vivienne Westwood dress and Iosselliani accessories. Photographed by Matthew Lyn in Toronto, Canada, Maslany appears all smiles as we meet the singular girl behind the multiple Sarahs ofOrphan Black.

From a virtually unknown actress in Canada, Maslany has gained fans worldwide raving about her portrayal of multiple roles in the sci-fi clone drama. With the series’ April 19 second season premiere looming, the actress’s costars and show creators praise her captivating performance and versatility. “She’s a total natural, a working prodigy,” says Graeme Manson, Orphan Black’s co-creator, writer and executive producer. “Everyone wants to do their best work because she’s working harder than everyone here, and everyone knows she’s doing something special,” adds fellow co-creator and executive producer–director, John Fawcett. Costar Jordan Gavaris agrees: “I don’t think there’s another actor right now, especially in her age range, who could have tackled something like this. The value of getting to work with an actor of her caliber is not lost on me.”

This issue of emmy also features a fashion pictorial with the stars of USA’sSuits, Gabriel Macht, Patrick J. Adams, Rick Hoffman and Sarah Rafferty, as they discuss the powerful style seen on the much-loved legal drama. “I like his power lapel,” Macht says of the Tom Ford suits that define his portrayal of litigator Harvey Specter. “It’s wide — it symbolizes strength. That look is really smart and strong.”  “When you’re wearing Valentino, you don’t mess around,” adds Rafferty on her designer wardrobe as the all-knowing and sexy secretary, Donna Paulsen.