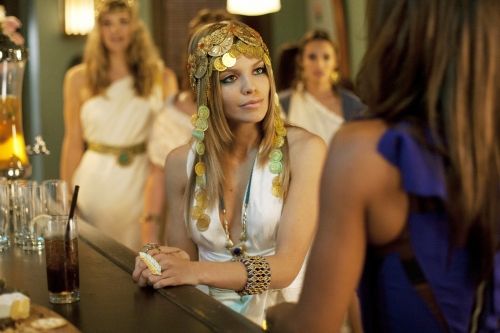 90210 Season 4 Episode 3 Greek Tragedy Photos : SURVIVAL OF THE FITTEST — After making an enemy in sorority president Holly (guest star Megalyn Echikunwoke), Naomi (AnnaLynne McCord) finds unusual allies who help her get revenge. Annie (Shenae Grimes), short on money for sorority dues, must figure out a quick way to come up with the cash. Liam (Matt Lanter) and Jane (guest star Kristina Apgar) get closer, while Adrianna (Jessica Lowndes) reveals a secret that causes Liam to look at her in a different light. Ivy (Gillian Zinser) becomes increasingly frustrated with her friends and lashes out at their lack of compassion, while Navid (Michael Steger) must deal with his uncle coming into town and trying to undermine Shirazi Studios. Jessica Stroup and Tristan Wilds also star. Rob Hardy directed the episode written by Paul Sciarrotta (#403). 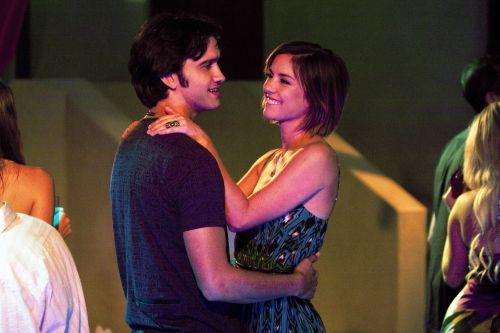 90210 Season 4 Episode 1 Up In Smoke Photos : In the season four premiere, gang from Beverly Hills have graduated from high school. Naomi (AnnaLynne McCord) has spent the summer dealing with the shocking news of her pregnancy and quickly discovers she doesn’t have the status at college that she did in high school. Annie (Shenae Grimes) receives some unexpected news that keeps her in town, while Liam (Matt Lanter) returns from his summer away ready to commit to Annie. Dixon (Tristan Wilds) finds himself without a roommate or a place to live, while an unexpected visitor tests Navid (Michael Steger) and Silver’s (Jessica Stroup) relationship after they move in together. Adrianna (Jessica Lowndes) comes back to town looking for redemption, which she soon learns will be hard to earn back. Ivy (Gillian Zinser) and Raj (guest star Manish Dayal) struggle to deal with Raj’s health getting worse, while Teddy (Trevor Donovan) struggles with coming out to his family. Elizabeth Allen directed the episode written by Patti Carr and Lara Olsen (#401).