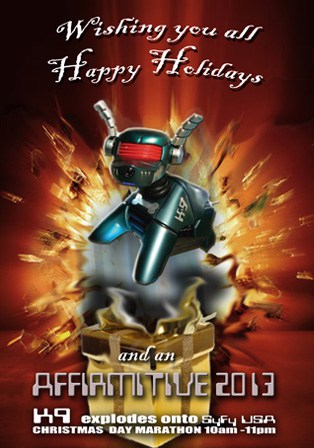 Syfy has acquired the exclusive U.S. broadcast rights to the Dr. Who spinoff K9 which have its U.S. premiere on the channel with a full series marathon on Christmas Day -Tuesday, December 25 – from 10AM-11PM ET/PT.

K9 follows the adventures of the robotic canine created by British writers Bob Baker and Dave Martin and first seen in the original 1978 BBC TV series Doctor Who series. The show mixes live action with stunning CG and special effects and pits the robot dog K9 and his teenage friends against a number of human and alien adversaries. The new dog is voiced by the legendary John Leeson, who voiced the original K9 from the 1978 Doctor Who series.

Bob Baker has won a number of BAFTAs for his co-writing of the hugely successful Wallace and Gromit shorts and feature, and together with his business partner Paul Tams, was closely involved in the creation of the new K9 series.