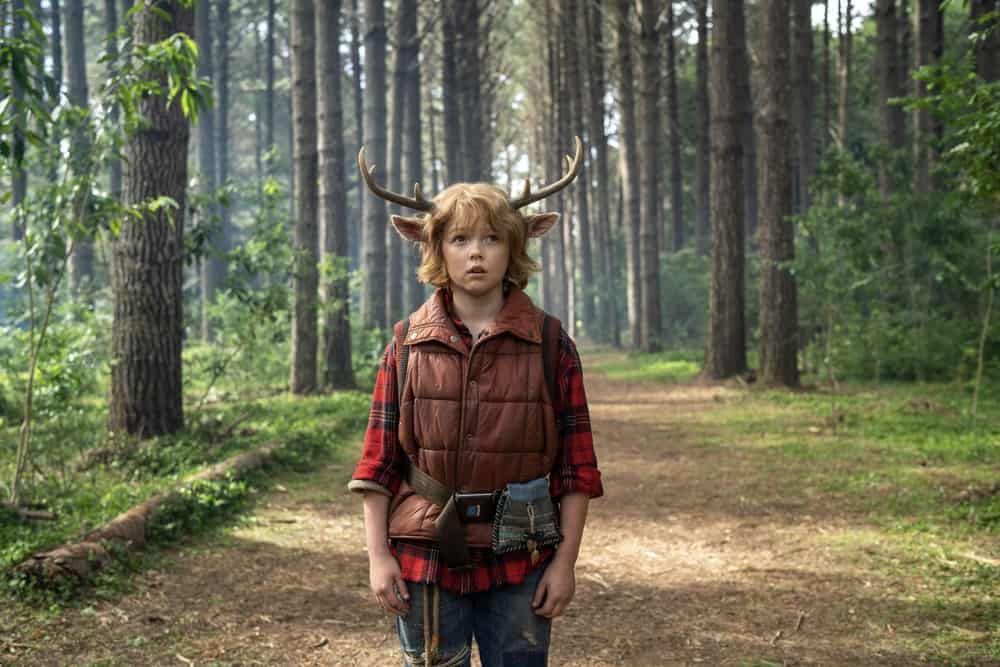 Note: This review only covers the first episode of the series.

Netflix recently released SWEET TOOTH, a series starring a young boy who is half deer. Based on the comic series, SWEET TOOTH follows the child as he ventures out into the world, dodging hunters and searching for his mom. He isn’t alone, thank goodness, but he does have to rely on himself a fair amount. Surely, the story have a happy ending, though probably not the one the boy hopes for.

SWEET TOOTH takes a little time to get going, providing exposition through the eyes of Dr. Aditya Singh (Adeel Akhtar, Enola Holmes). We see a plague overtake his city, and are told it’s widespread. This could be a bit traumatizing for some who just lived through a pandemic, especially if you lost someone. But it really isn’t too graphic, focusing on Singh’s emotional journey, including as his wife, Rani (Aliza Vellani, Little Mosque on the Prairie), becomes one of the infected. Listed as a lead, it’s certain we’ll come back to Dr. Singh’s tale in later episodes. This is a good way in for those who aren’t already drawn to post-apocalyptic fare. In all, especially with the accompanying narration by James Brolin (Life in Pieces), it’s a strong opening.

From there, it quickly moves to a man (Will Forte, Last Man on Earth) carrying a baby into the woods. We know from the hospital scenes that there are many animal-human hybrid infants, though we don’t know why, and this guy has one with him, a little boy with deer features. The man, known to the boy as Pubba (sounding like Papa), raises the child for nine years, and this extended sequence, making up about half the episode, is phenomenal. It is incredibly moving, if a little tame, and the love the father has for his son is palpable. Forte ditches the goofiness and really brings home the feelings.

It isn’t surprising when that happy time comes to an end; the trailer and poster spoil that it will. But like the beginning of the film Up, it could make a fitting stand-alone short that would be worth watching repeatedly.

The rest of SWEET TOOTH’s pilot sets up the premise. Pubba makes the boy, Gus (Christian Convery, Legion), promise not to leave their home, but it’s a given that he won’t listen. Gus doesstay  for awhile, but this story needs a journey, and you can’t get that hiding away. There is an arc, quickly gone through, developing the kid, and it’s just as moving as the stuff with his dad. Gus is a compelling protagonist who will immediately have you rooting for him.

The second lead, Tommy Jepperd (Nonso Anozie, Game of Thrones), is barely introduced in episode one, but already demonstrates plenty of complexity to attract interest.

SWEET TOOTH isn’t for little kids, even if it looks like it might be. But older children can watch it with their parents, as the deaths aren’t gruesome and the terror isn’t intense. It has a magical and hopeful spirit about it that is sure to intrigue many viewers, feeling like a heart-warming story that is sanitized, but not so much that it distracts. The acting seen so far is solid, and the story is interesting. Set in the woods, it also looks beautiful. There’s lots to praise SWEET TOOTH on.

I would be surprised if this series doesn’t have legs. Reviews have been good so far, deservedly so, and I was easily sucked into the story. I’m sure I’ll watch further installments before the end of the day. With a first season of only eight episodes, it should be an easy, enjoyable binge.